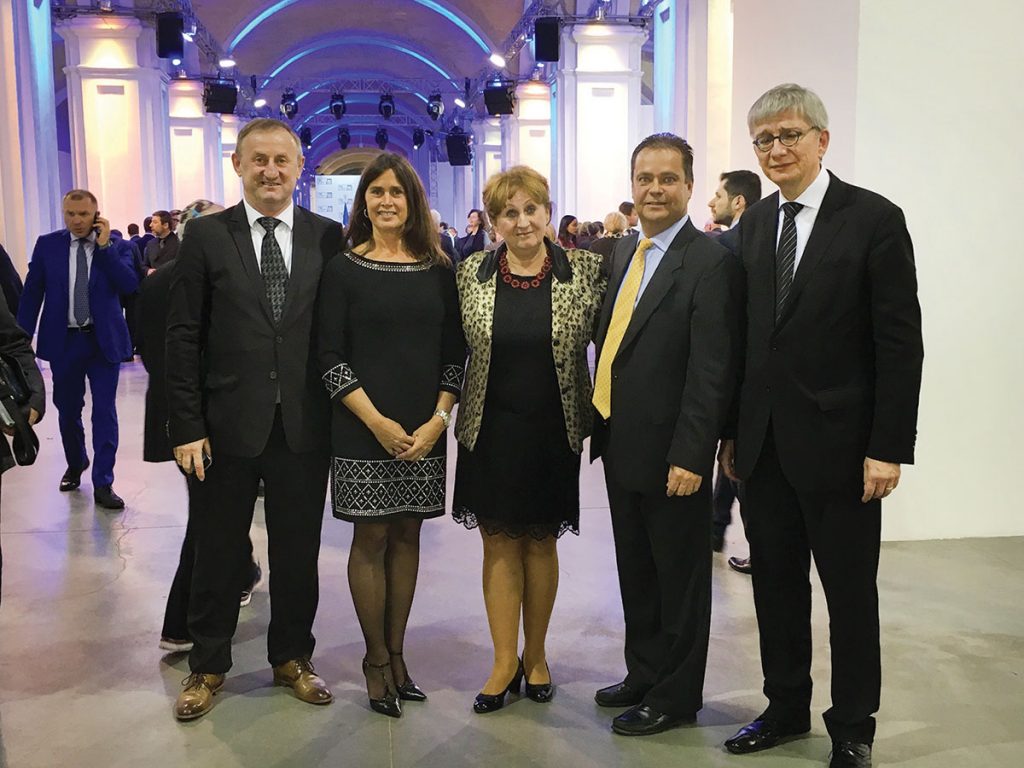 NEW YORK – At the invitation of Ukraine’s Prime Minister Volodymyr Groysman, the newly elected president of the Ukrainian Congress Committee of America (UCCA), Andriy Futey, and his predecessor, Tamara Olexy, traveled to Ukraine to participate in the official commemorations of the 75th anniversary of the Babyn Yar tragedy.

The solemn events paid homage to the thousands of victims of this horrific tragedy and remembered the Righteous who risked their lives to protect the Jews from murder, in particular, Andrey Sheptytsky, metropolitan of the Ukrainian Greek-Catholic Church.

In 1941 at Babyn Yar, (which means “old woman’s ravine” in Ukrainian) during the Nazi occupation of Kyiv, more than 30,000 Jews were brutally slaughtered within a 36-hour period by Hitler’s henchmen as part of the Final Solution to eradicate the Jewish population in Europe.

Following this first mass execution, Babyn Yar was sealed off with barbed wire and declared a restricted zone.  The killings, however, did not cease. Over the next several years, the mass grave swelled with tens of thousands of victims. During the final years of World War II, and until the German retreat from Kyiv, Babyn Yar served as a killing field, where an estimated 150,000 innocent victims – among them Jews, Ukrainians, Roma, Poles, clergy, political opponents, members of the Organization of Ukrainian Nationalists and prisoners of war – were murdered.

On September 29 a memorial symphonic concert, organized by the Ukrainian Jewish Encounter to honor the memory of the victims of Babyn Yar, was held at the Kyiv National Opera.  The concert brought together performers from 15 countries and featured works by Max Bruch, Yevhen Stankovych and Johannes Brahms, all under the direction of a young accomplished Ukrainian conductor, Oksana Lyniv.

Following the memorial concert, the UCCA was invited to attend a commemorative meeting and reception at the Mystetskyj Arsenal National Art and Culture Museum Complex with the participation of President Petro Poroshenko and Maryna Poroshenko; Prime Minister Groysman, and dozens of world leaders and dignitaries.

In his remarks, President Poroshenko stated that Ukraine pays tribute to the thousands of innocent tortured and killed during World War II in Babyn Yar. “The tragedy of the Babyn Yar is a wake-up call for the whole of humanity. Any regime that tramples on human rights and freedoms embodies a threat to that very humanity. That is why today’s solidarity against Russian aggression is an investment into the security and prosperity of a common and united Europe.”

The official state commemoration concluded with a program at the Babyn Yar National Historic Memorial Preserve. During the evening program, which was attended by world leaders and dignitaries, President Poroshenko stated “Babyn Yar is the tragedy of the entire mankind; however it happened on the Ukrainian land. … Babyn Yar is our common tragedy, the tragedy, primarily, of the Jewish and Ukrainian peoples.”