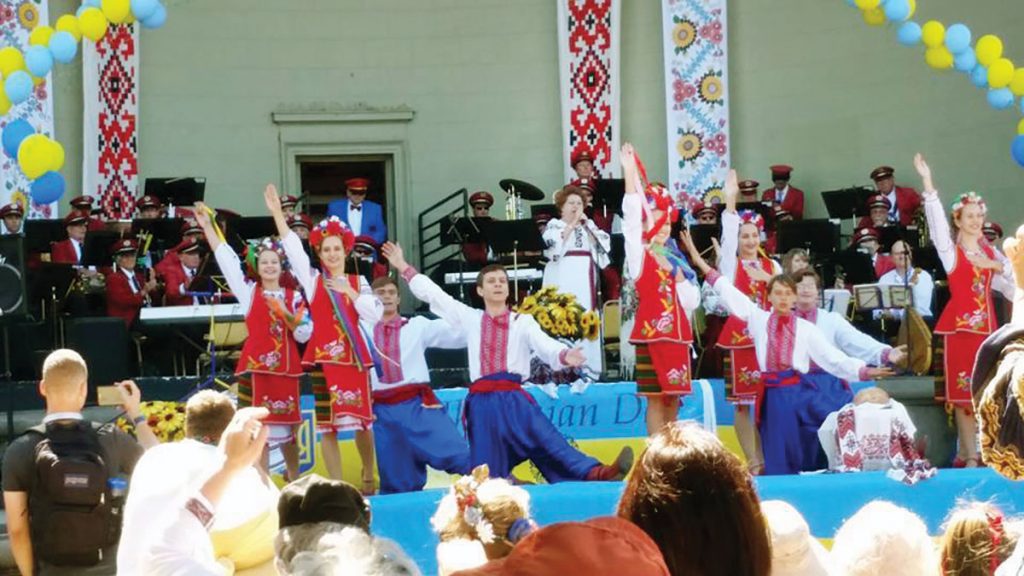 SAN FRANCISCO – On a cool sunny Sunday afternoon in San Francisco, Ukrainian Americans of the Greater Bay Area and Sacramento gathered for a joint concert to celebrate Ukrainian Independence Day with the Golden Gate Park band at the Spreckels Temple of Music (bandshell) in the historic, picturesque Golden Gate Park.

This concert was presented on August 28 by the Ukrainian American Coordinating Council of Northern California. Though this year was the 25th anniversary of Ukrainian independence, a significant milestone, the Ukrainian American community has been celebrating these concerts with the band for the past 53 years. The Golden Gate Park Band, a professional organization, is in its 134th season of performing with Michael Wirgler, its current conductor.

For this event, the Ukrainian community gathered in significant numbers, dressed in their embroidered finery or Ukrainian-themed blouses and shirts, to join a distinguished line-up of performers. Moreover, thousands of other people had the opportunity to hear the concert as the bandshell is in the middle of many popular venues located in the park.

The first such concert took place on Sunday, September 20, 1964, honoring the 150th anniversary of the great Ukrainian poet Taras Shevchenko and the unveiling of his monument in Washington on June 27 of that year by the 34th president of the United States, Dwight D. Eisenhower. The small, but very active Ukrainian community in San Francisco created a large Ukrainian folk dance ensemble for that event. They continued performing through the 1960s, 1970s and 1980s, with a revival of the cultural event by Maria Tscherepenko ushering in the 2000 millennium.

After the concert, St. Michael Ukrainian Orthodox Church hosted a celebratory reception, supervised by Oksana Tscherepenko, and well attended by both performers and the public celebrating the anniversary.

Father Georgiy Tyapko of St Michael’s opened the program with a prayer for Ukraine. Then, evoking a touch of the homeland, a pair of Carpathian heralders, Serhiy and Feliks Samborski, blew their trembitas. This was followed with the singing of the Ukrainian and American national anthems by the Trembita choir accompanied by the Golden Gate Park Band.

The opening number, “Pryvit,” presenting the Ukrainian traditional welcome of bread and salt, was performed as a dance by the Burevisnyky Ukrainian Dance Ensemble (an adult ensemble) consisting of Tatiana Burdiak, Larissa Paschyn, Andrew Sobol and Billy Prusinowsky. Burevisnyky is the Ukrainian name for shearwater, an oceanic migratory bird. The name reflects the fact that these dancers came from opposite corners of the world (New York/New Jersey and Australia) for this 25th anniversary.

Two very old traditional songs, “Oh in the Woods, in the Forest” and “On the Black Cliff Stands a Kozak” were performed by Oksana and Svyatoslav Stus, who specialize in this genre of Ukrainian music. The Golden Gate Park Band followed with a stirring performance of the “Eternal Revolutionary” by the famous Ukrainian composer Mykola Lysenko.

Then it was time for the younger set to perform traditional Ukrainian dances, and the groups Veselka and Sonechko from Sacramento ably performed the “Bukovynian” and “Bereznianka,” respectively. These groups are managed and their numbers are choreographed by Irina Arabagi, merited artist of the Republic of Moldova, and Georgi Arabagi, People’s Artist of the Republic of Moldova.

The program returned to singing as the stellar Ukrainian choral ensemble Koliada, directed by Andriy Kryshtafovych, sang the Ukrainian folk song “Oh, How Much I Love Our Mountains” and “The Kozak Song” (composer V. Lisovola).

The Golden Gate Park Band performed “Ukrainian Fantasy” (A. Bazhenov), courtesy of Roman Chernysky, conductor of the municipal band of Khmelnytsk, Ukraine. Maria Tscherepenko, mezzo soprano, sang “Farewell, Farewell, My Golden Motherland,” music and words by H. Nadretny, who composed it during the brutal Soviet period when many displaced Ukrainians longed to return to a free Ukraine. She was accompanied by bandurist Ola Herasymenko, Merited Artist of Ukraine.

The Bandura Ensemble of Northern California – Ola Herasymenko, Olesia and Roman Ritachka – performed two Ukrainian folk songs, “The Kozak Rides Beyond the Danube” and “Verkhovyno, Our World,” accompanied by the Stuses. A stirring rendition of “My Ukraine” was performed by Oksana Manzhay, mezzo soprano.

The program came to a climax with the dance groups Veselka and Sonechko performing the traditional and famous Hopak dance. The finale was a moving rendition of “Almighty God, Bless Ukraine” by Lysenko and “God Bless America” by Irving Berlin that were performed by all the soloists, choral groups and the Golden Gate Park Band in a salute to Ukraine and the United States.