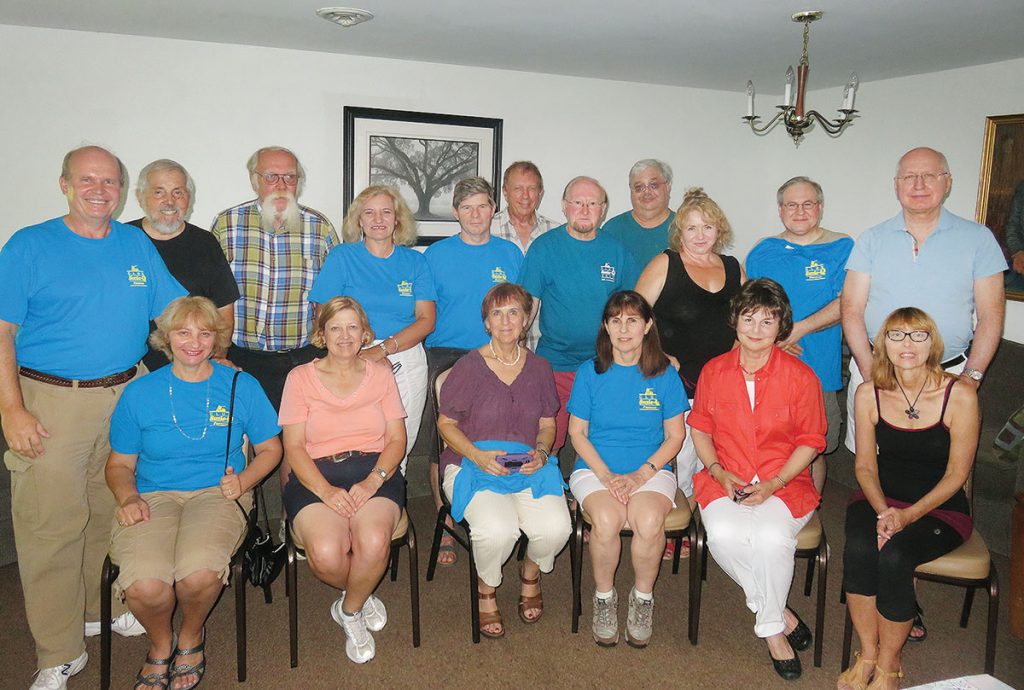 KERHONKSON, N.Y. – Club Suzie-Q, a group of Ukrainian American professionals who have been meeting annually since 1984, gathered again at the Soyuzvka Heritage Center in Kerhonkson, N.Y., beginning on August 13. This year’s group of 20 participants experienced social activities, dining, light hiking and informational presentations.

Topics of presentations and activities ranged from Ukrainian churches to aerial views of the Catskill Mountains, an art show featuring Club Suzie-Q member talent, and excursions to regional attractions such as lakes Mohonk and Minnewaska, and Wing’s Castle in Millbrook, NY.

Starting with a reception followed by the traditional hug-in, dinner and “zabava” (dance) on the first day, everyone was off to a great start.

Club Suzie-Q consists of both married and single professionals who enjoy friendships and learning about Ukrainian issues. Attendees hail from several Canadian cities, as well as numerous locations in the U.S. They participate in Soyuzivka’s planned events, such the crowning of Miss Soyuzivka, and there is a tradition of excursions outside of Soyuzivka grounds, as well as hiking on Soyuzivka’s trails.

The annual Monday evening Ukrainian Discussion Night is an important event for members as an update and sharing of information about Ukraine. This year’s featured event was the viewing and discussion of the video documentary “A Vision of Freedom: The Ukrainian Church and Communism,” which Club Suzie-Q member Lucy Alonso of New Jersey arranged.

The documentary covers the experience of the Ukrainian Greek-Catholic Church, which emerged from the underground in the late 1980s in the era of glasnost, and survived for more than four decades in spite of severe Communist government persecution of the institution, its clergy and its faithful. The video showed icons, churches, ceremonies and reporting of miraculous events, as well as interviews with clergy and professors.

During the discussion that followed, Anisa Mycak placed the events portrayed in the documentary into a wider historical context. News of the video showing traveled to the Very Rev. Dr. Ivan Kaszczak of Holy Trinity Ukrainian Catholic Church in Kerhonkson, who joined the group for an enthusiastic second viewing and a discussion of the documentary.

Taras Dobusz, an architect from New Jersey, provided a compelling presentation titled “Center Plan Churches.” Beginning with early Christian church design and leading through the Roman and Byzantine eras, he traced the development of the various plan forms and shapes and how they evolved to influence church construction in Ukraine.

Featuring six beautiful Ukrainian churches that he designed within the tristate area, Mr. Dobusz explained how those historic influences helped to shape their design. Delving into the practical areas of budgetary issues, building and zoning codes, and dealing with contractors, Mr. Dobusz made the experience of building a church come to life by showcasing the construction process of his most recent church, St. John the Baptist Ukrainian Catholic Church in Whippany, N.J., from start to finish.

A unique event this year was the Sunday afternoon art show that was held at the Soyuzivka library during which six Club Suzie-Q members presented their art, describing their backgrounds and their motivations for creativity, and explaining their works.

Sisters Tamara and Lesya Hanenko of New Jersey, presented their art works as “Fine Arts by Hanenko.” Their oil and acrylic paintings, painted glass, wood and ceramic items show a beautiful array of color, floral themes and landscapes. In their art, they feature “the beauty of Ukraine and its wonderful nature and people,” explained Tamara Hanenko. As a published poet, she also read poetry from her new book “Taste of Happiness.” Fine Arts by Hanenko appears at many Ukrainian events and festivals, and in galleries across the northeastern U.S.

Roman Barniak of New Jersey showed the group his spectacular photography of the American West. He explained the evolution of his photography career from “taking pictures while hiking” to “hiking to take pictures.” This involves learning how to be at the right time and place, such as rising at 3 a.m. to properly capture the beauty of scenes. Mr. Barniak enlightened the group as to the technology aspect of the process as well, stating, “We are in the golden age of photography, where recent technological developments have given regular photographers capabilities once available only to select professionals, or were simply impossible.”

Nadia Gavrylak of New Jersey displayed her hand-made jewelry and read her original poetry. Ms. Gavrylak’s beautiful, colorful Ukrainian necklaces were a treat for viewers at the art show. Her poetry, which she read in Ukrainian, included heartwarming themes such as an older couple’s loving and giving relationship, nature and childhood.

Myron Gudz of Connecticut presented paintings done by his father, Dr. Walter Gudz, and two ceramic plates done by A. Pankevich of Newark, N.J. Dr. Gudz’s paintings were mostly in the style of Mychajlo Moroz, with whom he learned to paint. Myron Gudz talked about the world-renowned Mr. Moroz, who painted landscapes as well as architectural landmarks, using his signature turbulent strokes. Themes of his paintings are well-known mountain ranges such as the Carpathian Mountains, the Alps and the Catskills. Dr. Gudz’s paintings, also landscapes, were done in a slightly refrained style. Mr. Gudz donated one of the Pankevich ceramic plates to Soyuzivka.

Club Suzie-Q members are also interested in local geographic features as well as interesting sites in the area. Yuri Mykolayevych of New York gave a narrated presentation of the Catskill Mountains’ physical features and geography, using his hiking and aerial photos. Mr. Mykolayevych who is a private pilot, provided spectacular aerial photography to view on a large screen. In this year’s presentation, he started by identifying the view from the Veselka deck at Soyuzivka.

He showed aerial views of the Devil’s Path lines of mountains and those around the Ashokan Reservoir. Additional views were of Schoharie Creek valley, where St. John the Baptist Church in the Hunter, N.Y., area is located, North-South Lake, Kaaterskill Falls, the Great Wall of Manitou escarpment, Huckleberry Point, various mountain cloves, and effects of the New York City watershed area.

Members have hiked and viewed many of these areas and find it of interest to learn about the topographical relationship of the familiar landscapes, viewing them from the aerial perspective. Mr. Mykolayevych said he is glad to share aerial views of Plast camps as well. (Readers may use Club Suzie-Q contact information at the end of this article if interested in contacting Mr. Mykolayevych or other presenters discussed.)

The unique local site that attendees visited this year was Wings Castle in Millbrook, N.Y. The stone and lumber constructed castle, complete with turrets, heavy wooden arched doors and a moat, has a true medieval look. Wings Castle has been featured on “Extreme Homes” on HGTV and has served as a backdrop for many music albums, movies and fashion shoots. Artists Peter and Toni Ann Wing built most of it with their own hands, using 80 percent recycled materials. The castle is now also used as a bed and breakfast. Club Suzie-Q members toured the grounds and the interior of the castle, and viewed the many antiques and collectibles inside.

Roma Cehelsky Nightengale of Rochester, N.Y., and Dr. Andrew Hrechak of Irvington, N.J., planned and managed the last four years of Club Suzie-Q weeks at Soyuzivka. Club Suzie-Q is independent of Soyuzivka and has met in numerous locations over the years, in addition to their annual gatherings at Soyuzivka for the last 33 years. The organizers work closely with Soyuzivka staff, particularly Sonia Semanyszyn, to schedule use of facilities, electronic equipment and furnishings as required for events and presentations.

Club Suzie-Q welcomes new members. For further information and to be added to the e-mail list, readers may write to Ms. Nightengale at clubsuzieq@gmail.com.