Remarks by Ukraine’s ambassador to the U.N. 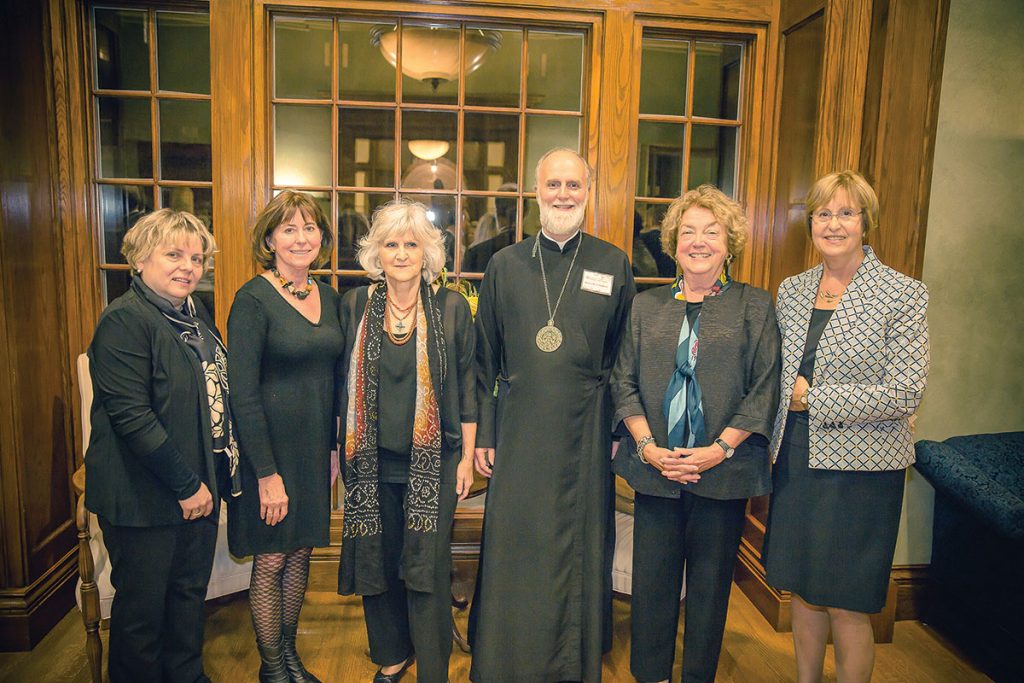 BOSTON – The Boston Friends of the Ukrainian Catholic University (UCU) held a cocktail reception for Bishop Borys Gudziak, Ukrainian Catholic Bishop of Paris, France, and President of the University, and more than 60 invited guests on Friday evening, October 28, at St. John’s Seminary, the seminary for the Archdiocese of Boston, which sits on an expansive campus adjacent to Boston College. Also present were a number of seminarians and members of the staff.

The reception was held in one of the seminary’s high-ceilinged, gothic rooms with windows overlooking the rose garden with a towering statue of Our Lady, the cloister, as well as the façade of the Romanesque chapel.

In the stately surrounding provided by the seminary, guests had ample time to mingle and to speak individually and in small groups with Bishop Gudziak and Alexander B. Kuzma, the Ukrainian Catholic Educational Foundation’s (UCEF’s) chief development officer.

During the course of the evening, the group was asked to assemble in one of the facility’s high-tech classrooms, where Bishop Gudziak was able to show a video of the latest developments on the UCU campus in Lviv, give an oral report and then take questions from those present.

The video highlighted the development of UCU’s new campus and its building program, and showcased its various state-of-the-art facilities, including its newly consecrated, three-level chapel. It also gave an overview of various innovative programs pioneered by UCU, including its Catechetical Program, its Handicapped Program, its Rehabilitation Program for Wounded War Veterans, its business and journalism Graduate Schools, and its new Good Governance Program.

Bishop Gudziak pointed out that the university was playing an important role in helping Ukrainians recapture their intrinsic individual dignity as human beings and noted that the doom and gloom of Soviet-era Ukraine had been dispelled and everyone in the video was smiling.

“The ability to trust others is slowly being restored,” Bishop Gudziak said, “and this is fundamental to the building up of community on a local and on a national level. Students and professors from UCU were among those in the frontlines on the Maidan in 2014 for example.”

“I am also very proud of our program for providing work and accommodation for the handicapped at the university from all over Ukraine who would otherwise be unemployed and destitute,” Bishop Gudziak continued. “By doing so, we hope to encourage others throughout the country to start similar programs.”

“Through the new Good Governance Program, the university has provided hands-on training to regional and local government officials from all oblasts of Ukraine in current moral and ethical Western governmental practices and has helped them break with the corruption that is so endemic in Ukraine,” the bishop said.

“Finally,” Bishop Gudziak emphasized, “UCU is important because it acts as a light in darkness and as a Catholic institution grounded in morals and values it tries to set a standard for the new Ukraine to follow. It is also scrupulous in money matters and sets a standard for fair dealing, and the cost for educating the future leaders of Ukraine is kept as low as possible. It is a small fraction of what the same education would cost in the West.”

During the discussion that followed, one woman who identified herself as Orthodox said she was proud to be involved in the growth and development of UCU because she felt that it held out promise for the country of Ukraine as a whole.

After the formal session, financier Adrian Slywotzky said, “The program began with a short video and then a deeply spiritual talk by Bishop Borys. It got even better when he asked us, the audience, why we support UCU. Right there, on the spot, he made us think. The answers were varied, thought-provoking, challenging and often inspirational.”

Commenting on the evening, UCEF’s Mr. Kuzma said, “We have been deeply grateful for the staunch support of our friends in the Boston area and Rhode Island, who have been among the most generous in their donations for the university anywhere in the country. Tonight’s event was especially gratifying because we were joined by many new donors and supporters who also offered their professional expertise to help strengthen UCU’s various programs.”

Although the cocktail reception was not a fund-raiser per se, several thousand dollars were donated for the Boston Friends of UCU’s current project of endowing the Good Governance Program lectureship, raising the amount gathered to over $60,000 of a projected goal of $100,000. In 2012 the Boston Friends of UCU also funded the Boston Seminar Room in one of the buildings that was then rising on the UCU campus in Lviv.

Speaking of the Boston Friends of UCU’s work, committee member Alicia Szendiuch said, “UCU is a trail blazer in Ukraine with the Good Governance Program and we are delighted to support it by raising funds here in Boston. And we hope to fully fund a lectureship in the near future.”