The Rev. Ivan Kaszczak speaks on brotherhoods and the Ukrainian Catholic Church in the U.S. 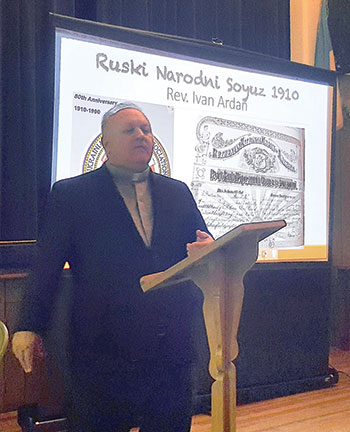 The Ukrainian-American Cultural Center, through its generous financial support, made it possible for the Ukrainian American community within the Capital District Region to hear the presentation by Father Kaszczak, who is the author of several books on the establishment and development of the Ukrainian Catholic Church in the U.S.

Father Kaszczak stated he has edited and added information to the soon-to-be-released new edition of Bohdan P. Procko’s book “Ukrainian Catholics in America: A History.” In the newest edition, readers will learn how brotherhoods were instrumental in the growth and development of the Ukrainian Catholic Church in the United States.

St. Nicholas Brotherhood Society in Watervliet has a long and distinguished history that very much mirrors the developments elsewhere in the United States where the brotherhood structure was in place. The local St. Nicholas Bratstvo was established on December 5, 1895, in Troy, N.Y., and over the decades migrated from its original membership base to nearby Watervliet. It was instrumental in church building and other community efforts both in Troy and in Watervliet. St. Nicholas Bratstvo also was an early member of the Ukrainian National Association and is affiliated with that fraternal organization as UNA Branch 13.

With masterful humor, Father Kaszczak brought together the diverse nature of the early bratstvo organizations and shed a light on how the local St. Nicholas Bratstvo fit into a much larger mosaic of immigrant growth from the disparate lands of the former Austro-Hungarian Empire, including today’s independent nation of Ukraine.

Members of the Ukrainian American community attended the free presentation and a small reception following the lecture. Many individuals took advantage of the occasion to purchase one of six books published by Father Kaszczak and receive a personal autograph from the author.