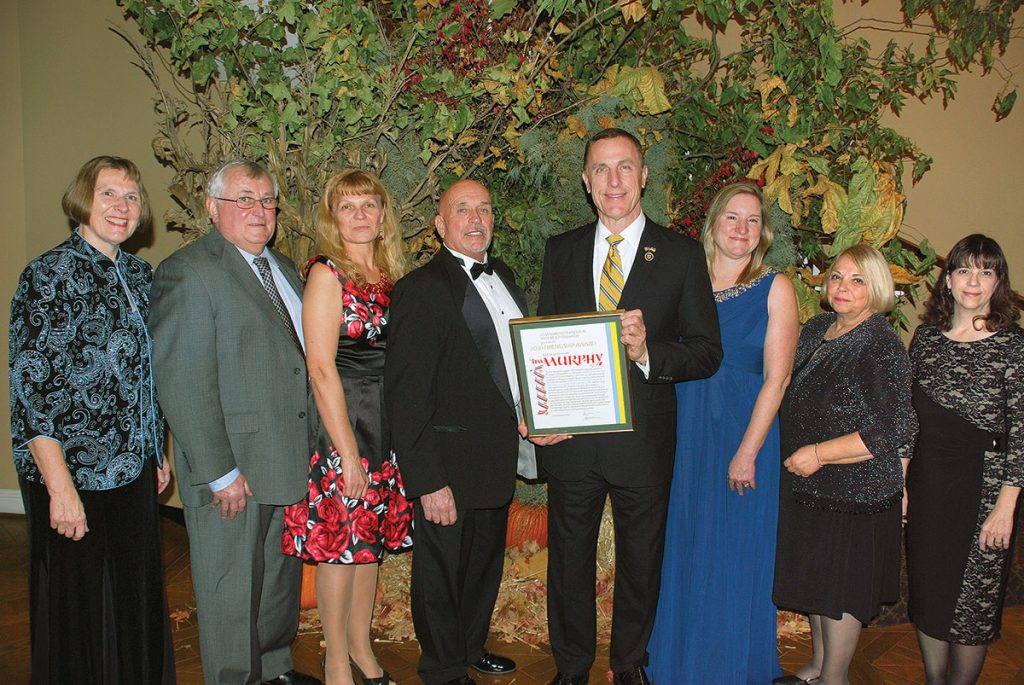 PITTSBURGH – The Ukrainian Technological Society (UTS) of Pittsburgh held its 46th annual dinner dance on Saturday, November 5, at The Club at Nevillewood in Pittsburgh. The society used the occasion to commemorate the 25th anniversary of Ukraine’s independence and to present its 2016 Friendship Award to Congressman Tim Murphy, a Republican who represents the 18th District of Pennsylvania.

Before the ceremony, Rep. Murphy was greeted by members of Pittsburgh’s Ukrainian community with the traditional offering of bread and salt.

In her welcoming remarks, Roksana Korchynsky, president of the UTS Executive Board, provided a brief overview of the society – now in its 47th year and one of the longest continuously active Ukrainian organizations in the tri-state area. Dr. Korchynsky noted that the society’s primary missions are to cultivate Ukrainian culture and social awareness and to strengthen the Ukrainian community through active participation and leadership.

She highlighted two of the society’s longstanding traditions: recognizing a Ukrainian of the Year or Friend of Ukraine and supporting education through the UTS Scholarship Program. The society’s Ukrainian of the Year Award recognizes individuals of local, national and international stature who have contributed to the Ukrainian community or Ukrainian scholarship, or who have demonstrated significant achievement, which brings recognition and prestige to the Ukrainian community. The UTS Scholarship Program, now in its 44th year, reflects the society’s commitment to helping students advance through attainment of their higher educational goals. Dr. Korchynsky noted that the society has now awarded over $200,000 through 440 separate scholarship awards.

Svitlana Tomson, CPA and principal of AcTech Cloud LLC, offered reflections on the 25th anniversary of Ukraine’s independence. Ms. Tomson, who came to the U.S. in 1989 during the period of Mikhail Gorbachev’s “perestroika,” noted the long and ongoing struggle for freedom and independence for Ukraine and her people, a struggle that continues today. Ms. Tomson recognized those that have lost their lives in the most recent conflict in Ukraine and asked for a moment of remembrance followed by the singing of “Bozhe Velikyi, Yedynyi.”

Rep. Murphy was honored for his steadfast support of a strong U.S.-Ukraine alliance; his support of legislation, including the Stability and Democracy for Ukraine Act (HR 5094), which tightens sanctions on Russia because of its actions in Ukraine and rejects any form of recognition of Russian rule over Crimea, and the Support for the Sovereignty, Integrity, Democracy, and Economic Stability of Ukraine Act (HR 4152), authorizing loan guarantees for Ukraine’s economic development; his hosting in 2013 of a Ukrainian delegation to examine the economic benefits and environmental requirements in developing shale gas reserves; his ongoing engagement with Southwestern Pennsylvania’s Ukrainian American community through town hall meetings highlighting the concerns of the community as they relate to issues in Ukraine; and for signing onto a bipartisan letter from the House of Representatives to President Barack Obama marking the 25th anniversary of Ukraine’s independence and requesting Ukraine’s full membership in NATO.

Upon accepting the award, the congressman recalled his own experiences in Ukraine, particularly his visits to the Maidan and the lasting impressions this made upon him. Rep. Murphy reiterated his steadfast support for a strong U.S.-Ukraine relationship and continued engagement with the local Ukrainian community. Following his remarks, Mr. Honchar invited all present to join in a celebratory “Mnohaya Lita.”

The Rev. Jason Charron of Holy Trinity Ukrainian Catholic Church in Carnegie, Pa., gave the invocation and the Very Rev. Stephen Repa of Ss. Peter and Paul Ukrainian Orthodox Church, also of Carnegie, gave the benediction. Music for the evening was provided by the Mosaic Duo.

To learn more about the Ukrainian Technological Society (UTS) of Pittsburgh, the Ukrainian of the Year and Friendship awards, the UTS annual scholarship program, and other UTS activities, readers may visit the UTS website at www.utspgh.org, send an e-mail to Board@utspgh.org, or like the UTS on Facebook.