UOC of the U.S.A. Sobor announces Strategic Plan for future 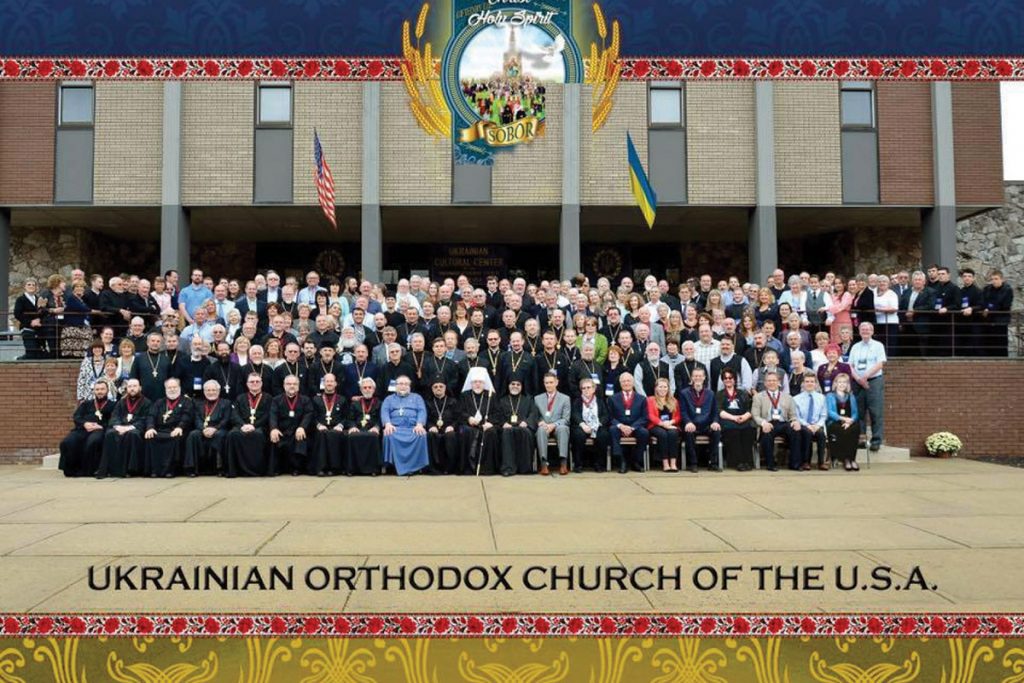 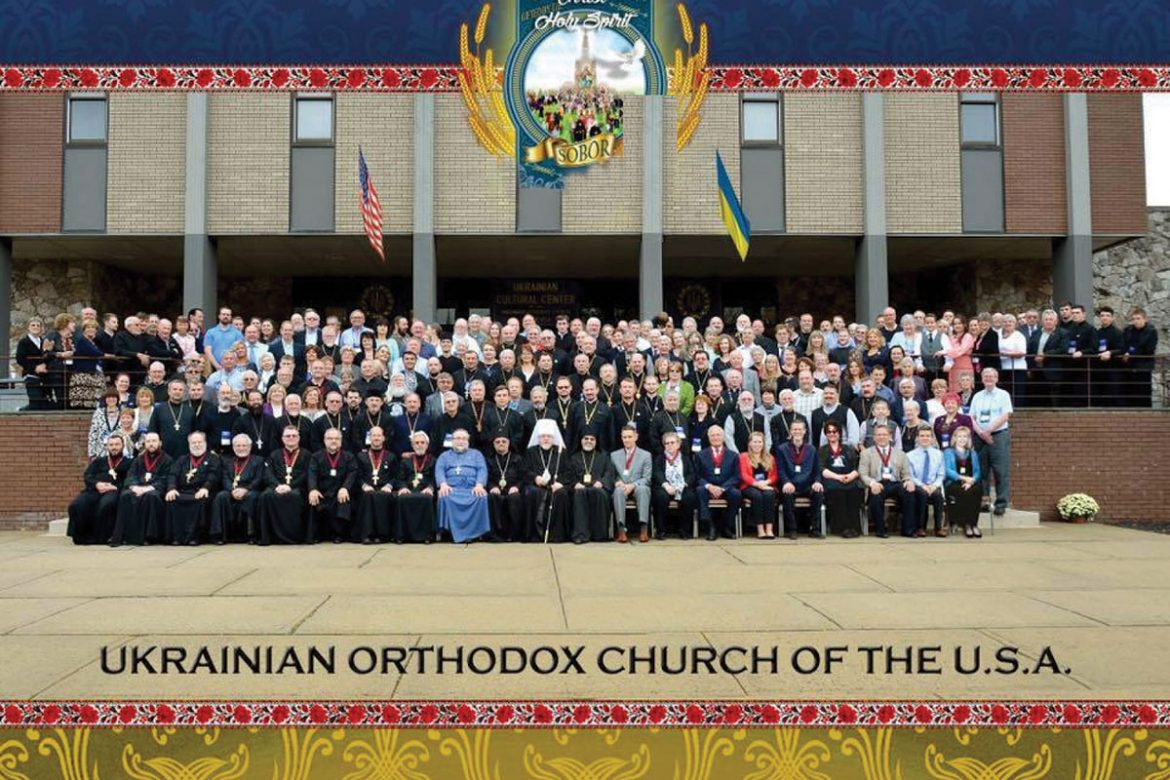 SOUTH BOUND BROOK, N.J. – The 21st Regular Sobor of the Ukrainian Orthodox Church of the U.S.A. (UOC-U.S.A.) was held at the Metropolia Center on October 19-22.

Metropolitan Antony introduced the Strategic Plan for the Church, explaining how crucial it is that everyone participate in order for it to be successful. A vibrant presentation by Bill Marianes, filled with eye-catching photos and verses, made it clear that it is the very future of the Ukrainian Orthodox Church that is at stake. The plan includes goals in the realms of administration, clergy, communications, education, family and youth, healthy parishes, outreach and evangelism, stewardship and technology.

At the beginning of the Sobor, a divine liturgy was celebrated at St. Andrew Memorial Church by Metropolitan Antony of the UOC-U.S.A., assisted by clergy who had arrived for the Clergy Conference that preceded the commencement of the Sobor at the Consistory rotunda, where the delegates, clergy and hierarchs gathered in anticipation of the opening procession.

The Very Revs. Bazyl Zawierucha and Stephen Hutnick carried the reliquary that contained the relics of 48 saints, including St. John Chrysostom, St. Antony the Great, St. Gregory Palamas, St. Olha (Equal to the Apostles), St. Gregory of Nyssa, and St. Volodymyr the Great (Equal to the Apostles). Following the delegates and clergy were Metropolitan Antony, Metropolitan Yurij of the Ukrainian Orthodox Church of Canada, Archbishop Jeremiah of South America, and Bishop Daniel of the Western Eparchy of the UOC-U.S.A. and president of the Consistory of the UOC-U.S.A.

Once the opening prayer, and ceremonies and the appointment of the Sobor presidium had taken place, delegates began a very intensive agenda.

Metropolitan Antony presented the formal greeting from Ecumenical Patriarch Bartholomew I: “…It is with great joy and paternal affection that we greet all the participants of the 21st Regular Sobor of our Ukrainian Orthodox Church of the United States of America, taking place in the Metropolia Center from October 19-22, 2016, with the scope of evaluating a Strategic Plan for Church activity over the next five years. For this God-pleasing desire and endeavor, we offer our wholehearted congratulations, as well as our prayers for faithful deliberations and for a successful conclusion, which we hope will rejuvenate a deeper love and longing for Christ and His Holy Church. …”

Metropolitan Yurij greeted the Sobor body and expressed his great honor at being present once again at the Sobor of the UOC-U.S.A. He confirmed the strong bonds between the Ukrainian Orthodox Church in Canada and the U.S.A. and about how well the two Churches often work together, supporting one another in the common goal of growing Christ’s Church. He mentioned that this is a critical time in the world, with much discord and disagreement and we, as Ukrainian Orthodox Christians are called to overcome these issues. He said: We are all called to work towards our salvation, to fix historical errors that have overtaken our homeland of Ukraine, which declared independence over 25 years ago and is still struggling for that independence to be unassailable. We must work towards not only an independent nation, but an independent Ukrainian Orthodox Church within Ukraine.

Archbishop Jeremiah thanked Metropolitan Antony for his continuous, generous and loving support of the UOC-U.S.A’s eparchy in South America. He expressed heartfelt greetings on behalf of all the faithful of South America and assured those gathered that they will be in his prayers for a successful Sobor.

Metropolitan Antony compared the new path of the Church, the new Strategic Plan that was to be discussed on the final day of the Sobor, to a “renovation.”

Bishop Daniel then presented his report as president of the Consistory, expressing his gratitude to each and every Church employee while outlining their responsibilities and accomplishments in the many ministries and work areas of life at the Metropolia Center and throughout the entire Church. He discussed the various buildings located at the center and the increasing maintenance problems, along with the usage of each of these buildings during the three years since the last Sobor.

The director of financial affairs, the Rev. Hutnick, and Audit Commission Chairperson Hanja Cherniak outlined three years of financial activity in the life of the Church – under the still very difficult circumstances created by what seems to be the never-ending recession in the U.S.

The afternoon session concluded with the approval of reports from St. Sophia Seminary, the senior Ukrainian Orthodox League, the Junior UOL and St. Andrew’s Society – the central organizations of the Church.

On the Sobor’s second day, divine liturgy was led by Metropolitan Yurij, who prayed for the continued success of the ancient tradition of the Sobor throughout all the history of the Ukrainian Orthodox Church.

Bishop Daniel and Metropolitan Antony asked all the delegates to respond to the Bishops’ Annual Appeal for contributions to the UOC-U.S.A. Metropolitan Mstyslav Endowment Fund, requesting that everyone consider making a five-year pledge to the Church.

Metropolitan Antony addressed the Sobor body before dismissing it. He stated that so many people has spoken to him about the many and huge responsibilities undertaken by Bishop Daniel over the 10 years of his episcopacy – the enormous number of people to whom he ministers not only in the Church here in the U.S.A., but also in Ukraine and the priceless work he does for the Church and her people, giving of his time, his skills and efforts. The metropolitan stated that Bishop Daniel should be nominated for elevation to archbishop. With a roar of approval and a standing ovation the entire Sobor body resonated exclamations of “Axios! Axios! Axios!” (he is worthy). The delegates then sang “Mnohaya Lita,” wishing Bishop Daniel many years. Metropolitan Antony informed the delegates that the nomination would be presented to Patriarch Bartholomew and the Holy Synod for formal election and inclusion in the Dyptychs of the Holy Ecumenical Church.

Bishop Daniel urged the faithful to participate in the vespers that evening. The Rev. Anthony Perkins, who led the service, stated how moved he was by the overflowing crowd, feeling the impact of so many prayers and so many voices raised together to glorify God.

The grand banquet that evening began with a procession of the Metropolia Council, followed by the hierarchs, including Archbishop Demetrios, exarch of the Ecumenical Patriarch and primary hierarch of the Greek Orthodox Archdiocese of North America. Other guests included Consul General of Ukraine Ihor Sybiga, Mayor Caryl Shoffner of South Bound Brook, N.J., and the Rev. Martin Ritsi from the Orthodox Christian Mission Center.

As the meal concluded, the St. Sophia Theological Seminary took to the stage to dazzle the public with a variety of pieces sung a capella.

Archbishop Demetrios assured the delegates that he is praying for the success of their Strategic Plan and the success of the Ukrainian Orthodox people. He expressed his positive impression of Ukraine and her faithful, their vibrancy and enthusiasm, and shared a very positive vision of his participation, along with Metropolitan Antony, as part of the Ecumenical Patriarchate delegation to the Great and Holy Council of the Orthodox Church, which took place in June on the island of Crete in Greece. He spoke of the extreme importance of this meeting – the first such important gathering of Orthodox hierarchs in over 1,300 years, since the last Ecumenical Council of 787.

Metropolitan Antony announced the results of the elections for the Metropolia Council, the Audit Commission and the Ecclesiastical Court.

The Council of Bishops presents the Church’s highest award – “Great Benefactor” – for a lifetime of service and dedication to the UOC-U.S.A. Individuals receiving this award are those who have served in various capacities on the national, regional and local parish level for decades exhibiting leadership and example for the faithful of our Church to emulate.

The recipients of the “Great Benefactor” award, which is awarded only during our Church Sobors, were:

• Stephen Sivulich, who for 30 years has served on the Executive Board of the UOL as president and in other capacities, as a founding committee member of St. Sophia Seminary, director of the Consistory Office of Development for eight years, head of the UOL fund-raising committee to purchase and establish All Saints Camp, chairman of the Metropolitan John Scholarship Fund and the LSSK Scholarship Fund, president of parish board and other offices of Ss. Peter and Paul Parish, Carnegie, Pa., head of parish kitchen and senior social affairs at the parish and visitor to the parish shut-ins;

• Helen Greenleaf, who served as president of the UOL and 20 years as a member of the Metropolia Council, member of the Church Constitution Commission, secretary of the Consistory and in various capacities of her local UOL chapter at St. Vladimir Cathedral, Parma, Ohio;

• Gayle Wolocshak, who served as president and in other offices on the Executive Board of the UOL, a member of the Metropolia Council for over 20 years, chairman of the Metropolitan Council Strategic Plan Committee, the Church’s representative on the Executive Committees of the Orthodox Christian Mission Center, International Orthodox Christian Charities, president of the Orthodox Theological Society of the U.S.A., president of the Orthodox Association of Medical, Psychology and Religious healing professionals, and professor and lecturer at five Orthodox Theological Schools, including St. Sophia Seminary;

• The Very Rev. Taras Chubenko, a member of the Metropolia Council for over 20 years, pastor of St. Demetrius Cathedral in Carteret, N.J., for 30 years, adjunct professor of pastoral theology at St. Sophia Seminary, dean of the New York-New Jersey Deanery for 20 years, and vice-president and member of the Consistory for 20 years; and

• Olga Coffey, who served as president of St. Andrew Cathedral in Silver Spring, Md., following retirement committed to a five year term of dedicated and devoted service in the Consistory of the UOC-U.S.A., refusing to take any salary as administrator of St. Andrew Cemetery and major donor to the Church’s History and Education Center. She served not only as cemetery administrator but also as organizer for all the meetings normally occurring at the Metropolia Center, such as Metropolitan Council meetings and Sobors.

The final day of the Sobor began with divine liturgy celebrated by Archbishop Jeremiah. Following liturgy, the faithful rolled up their sleeves and were ready to begin work on the presentation of the Strategic Planning portion of the Sobor.

The coordinators of each goal cited in the strategic plan came forward to present their tasks:

• Clergy, led by the Rev. Anthony Perkins, will work on: a clergy development program; clergy compensation and wellness; and U.S. clergy recruitment.

• Education, led by Mark Host, will work on: an Orthodox education lifelong learning program; and an Orthodox leadership development program.

• Healthy parishes, led by the Rev. Protoeacon Ihor Mahlay will focus on: a healthy parishes program; and a caring ministry program.

Having been introduced to the various goals, the entire Sobor body broke-up and each person headed to one morning and one afternoon break-out session corresponding to whichever goal interested them.

When the breakout sessions were completed, all the members of the Sobor gathered once again for a final review of the Strategic Plan and goals. With the motion made to accept and implement the Strategic Plan, the entire Sobor body seconded the motion and it passed by acclamation. The plan will be introduced at the parish level over the coming weeks and months when individuals within each parish are sought out as volunteers to coordinate efforts with the goal captains, chairpersons and hierarchs.