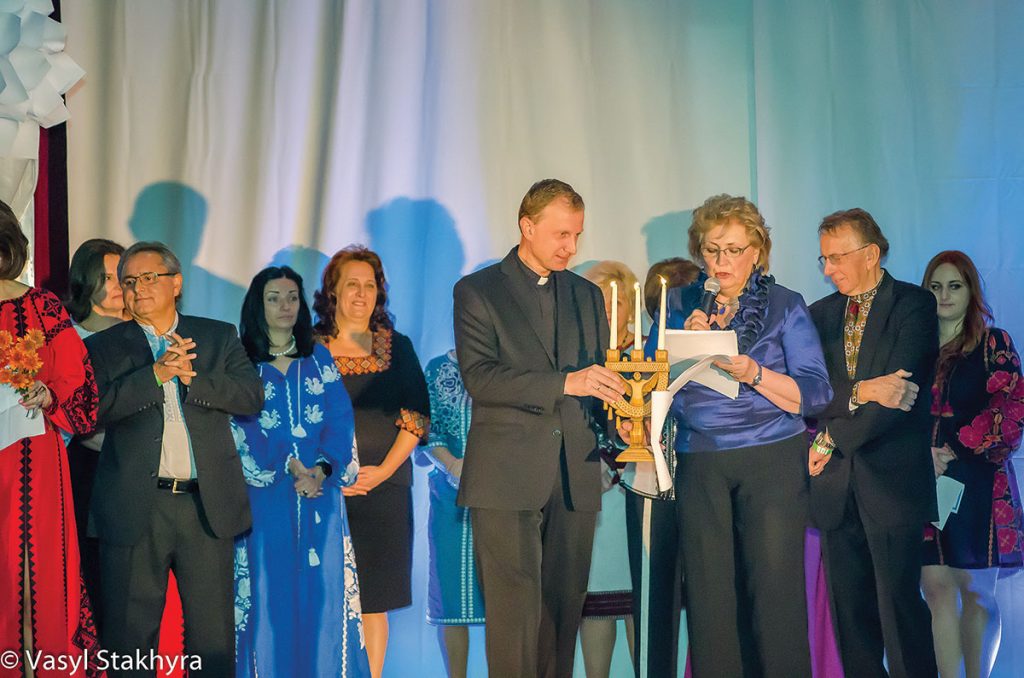 “Every woman brought her knowledge, talents and skills, her energy and time to work together for the benefit of Ukraine and the glory of God. As these different flowers together create a gorgeous bouquet, we hope and believe that together we will make significant contributions to the glorious history of the UNWLA. We put these flowers before the icon of the Mother of God, that she may take care of us in our work.” These were the words were spoken by Valentyna Tabaka, president of the UNWLA Branch 137, during the christening ceremony at which each member contributed a flower to a vase in front of an icon of the Mother of God.

The speech of Father Stepan Bilyk, pastor of the St. John the Baptist Ukrainian Catholic Church in Whippany, N.J., inspired the audience to consider that there are many Ukrainian American organizations in the diaspora that we often take for granted. Twenty-five years ago, while studying at the Ukrainian Greek-Catholic seminary in Italy, Father Bilyk related, he had no money. He was advised to apply to the UNWLA, and consequently he received $350 from a group of foreign women. That sum, at the time, was an incredible amount of money. Now Father Bilyk was invited to hold a christening of a recently created branch of the organization and he wanted to personally thank the UNWLA’s members.

But it was not only he who benefitted from the UNWLA’s assistance through its scholarship program. The famous French opera singer Vasyl Slipak, who died this summer fighting in the Donbas with a volunteer battalion defending Ukraine, and world champion chess master Mariya Muzychuk both also received assistance from the UNWLA. And there are many more, lesser known, but no less dedicated people working for the good of Ukraine in the world. Therefore, to be a member of the Ukrainian National Women’s League of America – a “Soyuzianka” – is, for newcomers of the Fourth Wave, a position of honor and responsibility.

UNWLA Branch 137, whose patron is the late Ukrainain American singer Kvitka Cisyk, was established in March 2015, first and formost as a response to the immense needs resulting from Russia’s war in the Donbas region of Ukraine. After more than a year of existence, the branch helped 20 families who lost a father to the conflict. The branch also adopted the family of Roman Abramov (as part of this UNWLA program each branch provides its adopted family with $300 quarterly) and, together with the Ukrainian School in Passaic, N.J., organized the “Talisman for Ukrainian Soldiers” campaign. The kind words of children were attached to handmade hearts that included an icon, and these gifts were delivered to the wounded soldiers in the hospital and soldiers on the frontline.

The branch held events to present to the Ukrainian American community the interesting cultural achievements of Ukraine, as well as to raise funds for needy families. Continuing this theme, Branch 137 members decided to combine their christening celebration with a charity ball of “vyshyvanky” (Ukrainian embroidery).

In recent years there has been a dramatic increase in interest among Ukrainians in their cultural heritage – especially in eastern Ukraine. Embroidered clothing and accessories have became fashionable. It is incredible to see such beautiful work by Ukrainian fashion designers and admire their imagination combined with high professional skill. Even the rings of the Lobortas Classic Jewelry House that is famous in Europe have elements of embroidery.

The event also included a presentation of paintings by artists Oksana Tanasiv, Chrystyna Kozyuk, Anna Zayachkivska and Olya Vojtsitska. Ternopil-born Ms. Tanasiv’s collection, “Couture Art,” “Dollar Art,” “Reincarnations” and “Oder de Chanel,” was previously displayed at New York fashion shows beginning in 2012. Her latest collection of paintings about Ukraine is based on Ukrainian embroidery. Ms. Kozyuk, a native of Ternopil, lives in Illinois and participates in many American competitions, exhibitions and openings. Imagine a picture painted with coffee – this is the style of Ms. Voytsitska. Ms. Zayachkivska, a native of the Ivano-Frankivsk region, draws in the style of iconography; this was the first exhibition of her works in America.

The beautifully decorated room, and the sound of music played on the piano by Natalya Bliduj created a festive mood for entering guests.

Designated as godparents of the UNWLA Branch 137 were UNWLA President Marianna Zajac; Dr. Nataliya Ivashyna, artist and deputy editor of InLove magazine; community activist Dr. Michael Lewko,; and Orest Fedash, manager of the Hudson Valley resort. Branch members expressed gratitude to them, as well as to the representatives of other UNWLA branches for their kind words and gifts.

Especially touching were the greetings from Zhytomyr. During her stay in Ukraine, Ms. Tabaka visited the military hospital in Zhytomyr to understand what supplies were most urgently needed to treat wounded soldiers. As a result of the trip, the UNWLA decided to allocate $22,000 to purchase hematology and biochemical analyzers, and two binocular microscopes for this hospital. Lidia Bilous, social welfare chair on the UNWLA’s national executive board, delivered this generous gift in May. Since that time, according to Col. Volodymyr Trenchuk of the military hospital, 9,000 soldiers from the anti-terrorist operation (ATO) were evaluated using this technology.

The fashion show began with the artistic composition “Owls.” This exotic clothing line was designed by Lena Vasenko from Ivano-Frankivsk, whom journalists have described as “a person who knows how to turn clothing into art.” The author of the presentation, Ms. Zayachkivska, Miss Ukraine-Universe 2013, thanked Ms. Vlasenko for creating her gorgeous outfit for those competitions.

Aliona Serebrova is one of the most celebrated and successful Ukrainian fashion designers ever. With more than 10 years of experience running her own fashion business, she is a couture leader in Ukraine, showing her clothes at a range of international events and runways. She has earned respect not only as a talented designer, but also as a driven businesswoman. She focuses primarily on designing eveningwear, formal gowns and luxurious dresses. Her work has received great critical acclaim, and myriad international awards.

Foberini, a young Ukrainian brand, has already received attention on the international stage. In its collection, elements of traditional folk culture are coupled with modern-day techniques and color. Beyond representing individual identity, Foberini’s collections use Ukraine’s rich cultural heritage, designs that are being revitalized across the country.

Olena Dats’ brand is shown worldwide and is successfully promoting the convergence of Ukrainian traditions with the modern world. Ethnic symbols aren’t present on the surface, but are part of the sacred core; this is something real, life-giving, a source of energy and strength. Olena Dats’ dresses may be found in showrooms in Paris, at Ukrainian Fashion Week and at many red-carpet events.

Oksana Polonets is a successful Ukrainian designer whose new collection proves once again that interest in the Ukrainian style is rising worldwide. Her designs offer a fresh perspective and understanding of what modern women want.

The fashion collection of the fur company Ant concluded the show. The director and owner of the brand, Victor Antonenko, is a member of the Ukrainian Designers Association.

The audience so warmly received the collections of all these talented Ukrainian designers that the models themselves could not sustain the strict, blank expression required of runway models. Their smiles were a wonderful addition to the elegant clothing and created an unforgettable, festive atmosphere.

Other special guests of the evening were Eugenia Boridka, Miss Ukrainian Diaspora 2015, a native of Poltava; Ms. Zayachkivska, Miss Ukraine-Universe 2013, from the Ivano-Frankivsk region; and Alexei Kuznetsov, winner of the X-factor from the Donetsk region. Interestingly, they represented three distinct parts of Ukraine.

The family of Mr. Kuznetsov is currently living in the occupied territory of the Donbas; his grandmother is Ukrainian. Despite all the stereotypes, he speaks perfect Ukrainian and came to support the UNWLA’s charitable function. The childhood and youth of the future singer in the mining town of Makiyivka, his success at the “X Factor” song contest, and his internships and performance in opera houses in Rome, Milan, Florence, Vienna, Zurich and Guangzhou (China) could be the plot of a movie. Now Mr. Kuznetsov is studying with New York’s Metropolitan Opera.

During the fund-raiser the singer performed three pieces: two opera arias in Italian and the song “Chornobryvtsi.” He reminded the audience of the famous opera singer Solomiya Krushelnytska, who always included a Ukrainian song in her world-class concerts.

The success of the charity ball was heavily attributed to its sponsors, among whom were NOVA Ukrainian American Federal Credit Union in Clifton and the Ukrainian National Association, and especially to Mr. Lobortas, who donated items for the auction.

Funds raised from the charity ball will be sent to aid orphans and families suffering from the political conflict with Russia, and used to purchase medications and medical equipment.

“May God bless you abundantly and reward you handsomely for all the good you have done for me and my family,” said Tetiana Abramova, the widow with two children whose family was adopted by UNWLA Branch 137. May these words be a thank-you to all who attended this charity event, were on stage and worked behind the scenes.