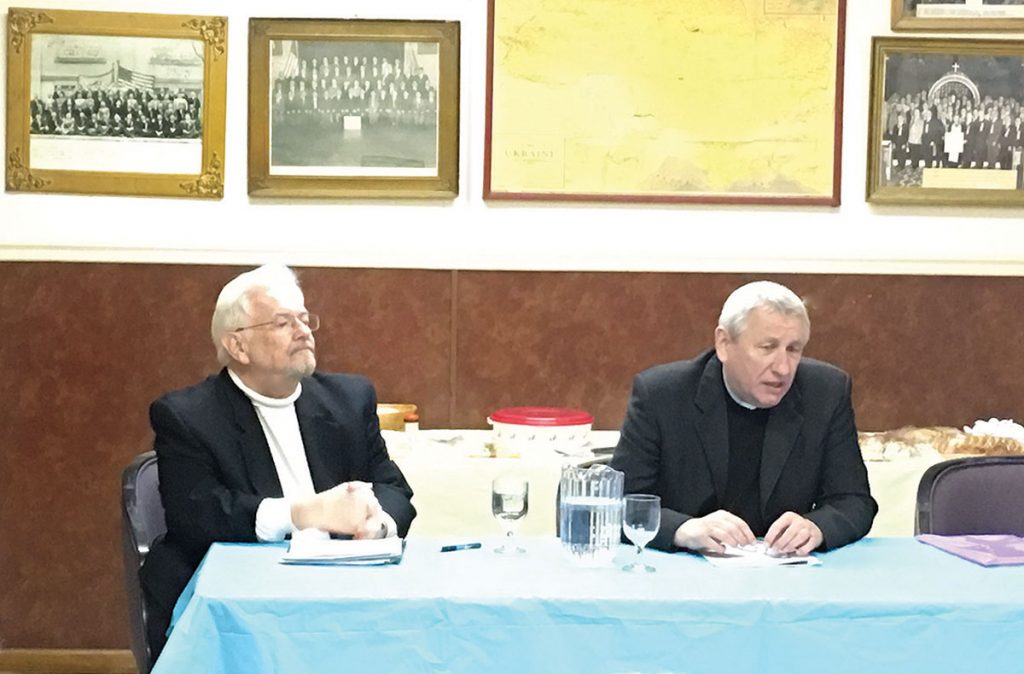 WATERVLIET, N.Y. – On December 9, the Ukrainian community of the Albany area had the privilege of meeting with Father Ivan Howhera, who described his experiences ministering to the wounded and dying fighters and soldiers on the Maidan and in the Donbas.

The assembly was sponsored by the New York State Capital District of the Ukrainian Congress Committee of America and took place at the Ukrainian Club in Watervliet.

Father Howhera began the assembly with a prayer and then discussed the context which led to his personal decision to go to the Maidan and then to the Donbas.ver of western Ukraine, the Ukrainian people were faced with three choices. Each choice ultimately performed the will of God. There were those who fled to the West, and by doing so enriched the culture and the strength of the diaspora, which was crucial in the preservation of the Ukrainian identity. There were those who would not, or could not, escape and – by refusing to cooperate with the Soviet regime – accepted imprisonment, exile to Siberia or martyrdom. In choosing this road, these patriots became an inspiration and heroes to their countrymen. The third group were those who stayed and tacitly tolerated the oppressors for their own survival.

Father Howhera stated that each of these groups is owed gratitude for the unique role each played for the good of Ukraine.

The clergy who stayed were faced with this extraordinary moral dilemma. They could refuse to go over to Orthodoxy and accept exile, but this would leave their parishes without a pastor who cared for the Ukrainian people, and assuredly would lead to a replacement chosen by the Soviet government, who then would be free to indoctrinate the people to their will. And so, with heavy hearts, many decided that it would serve their parishioners best if they did not let a “wolf in amongst the sheep.” They accepted the stigma of submitting to a superficial conversion, while always striving to protect their charges from the enemy. They unquestioningly administered to the spiritual needs of both Orthodox and Catholic, thus keeping the faithful united in a Ukrainian Church.

The quiet struggle of the priests comprising this third group bore fruit in 1989 when, given the opportunity of freedom with the lifting of the ban against the Ukrainian Greek-Catholic Church, almost overnight one parish after another declared itself as being Ukrainian Catholic. He related how joyous it was to see Ukraine become independent in 1991 with a “bloodless” revolution.

Yet, said Father Howhera, somehow that “bloodless” label sat uneasily upon the hearts of many, for “the devil does not let go of his booty so easily.” Father Howhera described the elation of the people with the outbreak of the Orange Revolution, and the bitter disappointment when reform never came and “the devil returned.” Despair and apathy reigned. “The people rose up once and it was for naught, they will never rise again” was on the lips of many, he related.

The Ukrainian people, however, are a stubborn lot, and when the Yanukovych administration showed its hand by refusing the path toward Europe, turning instead to Russia, it was the youth who fought back. They fought in a Revolution of Dignity for their future and the future of their country. It started with a trickle, then a stream and ultimately a torrent of a million ordinary people gathering on the Maidan. Father Howhera said he could not sit idly by. On his own, he went to the Maidan, to provide religious services, hear confessions and give council to those who were braving the bitter cold to demand their freedom.

He described how the people of Kyiv warmly greeted them, not only joining them in protest, but seeing to it that no one went hungry and that everyone was provided for. All this happened spontaneously. People did not have to be told what to do. Each one would look to see what was needed and did his best to fill that need. Father Howhera, and other priests like him, filled the spiritual needs of the people.

Then the beatings started and the blood flowed. He described how the protesters, with only construction caps for protection and sticks for weapons, withstood the onslaught of the Berkut special forces fully clad in riot gear.

Then the shooting started. Father described how he would go from one young protester to another, shot in the back or in the face, and pray with them as their young lives slipped away. He said one young boy clutched his hand as he tried desperately to cling to life, and how, having said prayers with him, father had to tear himself away, because there were so many others yet unattended. Others, arriving to replace the fallen, asked father to bless them as they were going to their deaths.

Father Howhera did as they asked, but insisted on blessing them for life, and they went forward to do what their conscience demanded of them. Wherever a priest appeared, there would be a rally in morale, as the people would see that their pastors had not abandoned them in their hour of need.

After the Maidan was over, the invasion came. Father Howhera related how news came to his parish that a son of one of the parishioners had fallen and that someone had to tell his mother. He accepted that responsibility and informed the boy’s mother. At the funeral, the mother came up to him and thanked him. “For what?’ he asked. “For not trying to cheer me, but for taking my hand and crying with me.”

Father Howhera asked to be sent to the front to provide ministry to the soldiers, but was told he was “too old.” So again, he went on his own.

He ministered to the volunteer battalions. In those early days of the invasion, it was the volunteers who stopped the Russian flood, and they paid for it with their blood. Father described the suffering of the wounded, those maimed and dying, but he said he believes the worst of all may be those who were psychologically destroyed from what they saw. “There are prostheses for a lost limb, but none for a lost mind,” he commented. Facilities to deal with post-traumatic stress syndrome are nonexistent, and such wounds affect not only the victim, but all his loved ones, and will last long after the war is over.

“The dead come home. Their remains pass by streets lined with blue and yellow ribbons in their home town. Their parents and families are made to feel that their son’s death had meaning. They have closure. For those, however, who bear wounds in their spirit there will be no rest,” Father Howhera commented.

The speaker concluded his talk by thanking the audience and the diaspora in general for their help – both material and spiritual. “Without your aid we could not succeed,” he noted.

He left an audience moved with sympathy and a new understanding and appreciation of what the people of Ukraine are enduring every day.