Initiating a dialogue with the next president of the U.S. 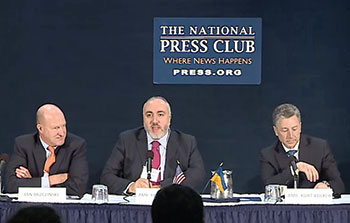 WASHINGTON – The U.S.-Ukraine Foundation (USUF), in partnership with the Friends of Ukraine Network (FOUN), transmitted a set of initial policy recommendations to the Trump-Pence transition team.

USUF President Nadia K. McConnell wrote to Vice President-Elect Mike Pence as the head of the transition team: “Support for Ukraine has always been and is today a bipartisan position, in the belief that a successful Ukraine is in the interest of the United States. We trust that a Trump-Pence administration will not only continue this support but increase it in a meaningful way. Because we have obligations under the Budapest Memorandum, where Ukraine gave up the world’s third largest arsenal of nuclear weapons in exchange for assurances regarding Ukraine’s sovereignty. Support is also needed to address the humanitarian crisis and to recognize the great commitment, resilience and growing capacity of the people of Ukraine who continue to make the ultimate sacrifice for freedom with dignity in defense of their own interests and ours.”

The FOUN, an initiative of USUF, an informal coalition of former ambassadors and leading experts with an active interest in U.S.-Ukraine relations, has prepared a set of policy recommendations for the next administration, as well as for the next Congress. These recommendations relate to sanctions, U.S.-Ukraine relations, humanitarian assistance, energy reforms, economic and technical support, and military and security assistance. They can be viewed in full at www.usukraine.org/events/Recommendations-for-next-US-President-and-Congress.shtml.

The non-partisan coalition and USUF have been working together on U.S.-Ukraine relations since 2005.

These recommendations were discussed in a series of forums titled “Ukraine in Washington,” during which experts offered their insights on how to approach these delicate issues. The two most recent forums, held on September 14 at the U.S. Capitol and October 25 at the National Press Club, provided a multitude of points that will heavily factor in the final recommendations USUF and FOUN are providing.

The September 14 forum primarily focused on the critical role of Congress in regard to support of Ukraine. Each member of the House and Senate Ukraine caucuses received a special message that included commemorative stamps issued on the occasion of the 25th anniversary of Ukraine’s independence.

Congresswoman Marcy Kaptur (D-Ohio) said it best: “I view Ukraine as the key to liberty for places far beyond her borders. However, that promise may never be realized without support from other free nations, certainly the United States.”

Congressmen Tim Murphy (R-Pa.), Chris Smith (R-N.J.), and Eliot Engel (D-N.Y.), also addressed the forum, and each spoke to the tenacity of the people of Ukraine and the importance of Congress continuing its bipartisan support.

Ambassador Paula Dobriansky also touched upon the role the next Congress will play in helping Ukraine. It’s important during this transitional time to keep Ukraine on the front pages, and to ensure that it is in the forefront of policymakers’ minds, she said.

Ukraine has struggled long and hard over its 25 years to reach stability, as highlighted by a panel that included Ambassador William Taylor as moderator; Ian Brzezinski, an Atlantic Council fellow; Carl Gershman, president of the National Endowment for Democracy; and George Weigel, a senior fellow at the Ethics and Public Policy Center. These experts presented an image of a valiant country that has fought hard over its 25 years, and one that has a bright future should it be allowed to blossom.

Perhaps most important is how the next Congress and the next administration will specifically address the challenges presented by Vladimir Putin, which was the topic of another panel. Experts on that panel included Damon Wilson, executive vice president of the Atlantic Council; Ambassador Kurt Volker and David Kramer of the McCain Institute; Hannah Thoburn of the Hudson Institute; and moderator Temuri Yakobashvili, the former Georgian ambassador to the U.S. and the president of the New International Leadership Institute. They all concluded that sustained pressure on Mr. Putin is required.

While the September forum discussed the importance of Congress, the October conference spoke more to how the next U.S. presidential administration should address issues surrounding Ukraine. This event at the National Press Club drew a large audience that included representatives of non-Ukrainian diaspora organizations and groups for whom Ukraine and U.S. policy towards the region are of concern.

Forum moderator Orest Deychakiwsky from the U.S. Helsinki Commission introduced the Ukrainian Chargé d’Affaires Oksana Shulyar, who gave a brief overview of some of the recent successes and challenges in U.S.-Ukraine relations.

Opening remarks were also provided by event co-chairs Roman Popadiuk (former U.S. ambassador to Ukraine and currently with Morgan Lewis Consulting) and Temuri Yakobashvili (former Georgian ambassador to the U.S.) Ambassador Popadiuk noted that the humanitarian situation in Ukraine has been virtually forgotten by the international community (as measured by resources required compared to what has actually been provided). Ambassador Yakobashvili stressed the regional and global significance of Ukraine by pointing out that, in contrast to the famous phrase “what happens in Vegas stays in Vegas,” the consequences of what happens in Ukraine are felt far beyond its borders. Ukraine is not and cannot be a parochial concern.

Video of the full panel discussions can be accessed at http://usukraine.org/uwfall2016/images/

One of the highlights of the forum was the appearance of surrogates on behalf of both presidential candidates. Melanne Verveer (former ambassador-at-large for global women’s issues) represented Democratic candidate Hillary Clinton, while Bob Ehrlich (former governor of Maryland) spoke on behalf of Republican candidate Donald Trump.

Ms. Verveer pointed out Mrs. Clinton understands that Ukraine is one of the United States’ most important partners in Europe, that we must help it to succeed, and that the U.S. must be firm and consistent in pushing back Mr. Putin in Ukraine. At a minimum, Ms. Verveer continued, Mrs. Clinton believes sanctions against Russia should be maintained at the current level and even be increased should the situation deteriorate.

Gov. Ehrlich said Mr. Trump prefers a Reaganesque approach and that he believes the world would have been better off if NATO had moved to secure the border between Ukraine and Russia on the heels of the Crimean invasion, and that a helpful U.S. and a stronger NATO will constrain Russia’s expansionist ambitions. Mr. Putin must be made to understand that he will face longer-term and real punishment in the event of renewed belligerence, said Mr. Ehrlich. The U.S. must work towards Ukraine’s long-term peace and security – and that’s the bottom line, he stressed.

Commenting on a recent statement by another Trump surrogate, Newt Gingrich, that a Trump administration would be prepared to sell Ukraine lethal weapons on deferred credit, Mr. Ehrlich replied that that is the position of the campaign and that any statement by Mr. Gingrich on any bilateral issues should be taken seriously because he will play a serious role in any Trump administration.

USUF President McConnell presented each surrogate with a “Sounding the Alarm for Ukraine” bell, which was crafted by blacksmiths from Ivano-Frankivsk.

In keeping with the foundation’s commitment to practical outcomes by translating analyses and recommendations into practice, Ms. McConnell in her concluding remarks announced two additional initiatives to keep “Sounding the Alarm” in support of the people of Ukraine: A Former Members of Congress for Ukraine group that will, among other things, work with the House and Senate Ukraine caucuses in the new Congress in support of a Ukraine policy agenda; and the Nationwide Ukraine Advocacy Network, which is bringing together organizations (including non-Ukrainian American) to conduct grassroots advocacy campaigns during what promises to be a critical year for U.S.-Ukraine relations.

The forum was made possible by grants from the Jurkiw Family Fund and the New International Leadership Institute and with the support of Viktor Vintonyak.

The U.S.-Ukraine Foundation is a 501(c)3 non-profit organization established to support democracy, a free market and human rights for Ukraine. The foundation, with offices in Washington and Kyiv, welcomes interested individuals and organizations to join its efforts in policy advocacy work for Ukraine. Readers may contact USUF by e-mailing info@usukraine.org or by calling 202-524-6551. The foundation’s website http://usukraine.org/ includes information and videos on its events, including both forum events described above.