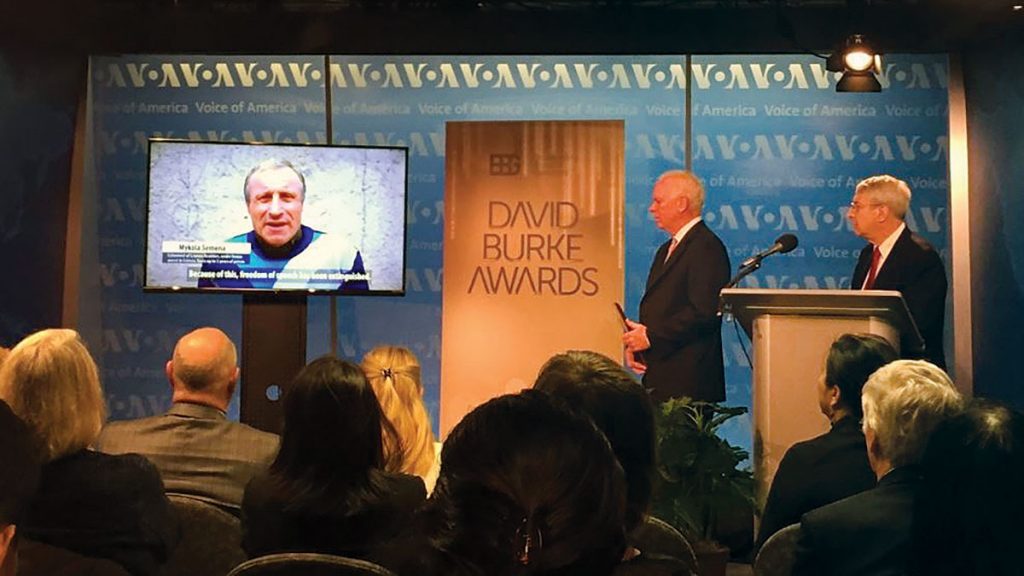 WASHINGTON – The Broadcasting Board of Governors has recognized the professionalism and courage of the RFE/RL Ukrainian Service’s Crimea desk by presenting it with the 2016 David Burke Distinguished Journalism Award.

RFE/RL President Thomas Kent accepted the prize on behalf of the journalists in a ceremony on December 1 presided over by BBG Chief Executive Officer John Lansing. Mr. Kent said the Crimea desk’s work provides “a lifeline for audiences in Crimea cut off from reliable local news” and “serves audiences everywhere that want the truth about what’s happening on the peninsula.”

The BBG paid special tribute to Crimea desk contributor Mykola Semena, who is under house arrest in Symferopol on charges of “extremism” brought by the peninsula’s Russia-backed authorities. Mr. Semena, whose arrest prevents him from leaving the peninsula to receive urgently needed medical care, was awarded the Eastern Partnership Civil Society Forum’s Pavel Sheremet Journalism Award in absentia in Brussels on November 28, and the National Union of Journalists of Ukraine’s Igor Lyubchenko Press Freedom Award on November 2.

Launched in March 2014, just days after Russia annexed the peninsula, the Crimea desk, known locally as Krym.Realii, is virtually the only remaining independent news source on the peninsula. It reports via radio, television, and mobile and digital platforms; its website is published in the Ukrainian, Russian and Crimean Tatar languages.

Krym.Realii’s website has been intermittently blocked on the peninsula since April of this year, and most of the desk’s journalists, having faced harassment and interrogations by Russia’s security service, have relocated to Kyiv out of fear for their safety.

The Burke Awards are named after David W. Burke, founding chairman of the Broadcasting Board of Governors and its leader for its first three years. The awards are presented annually to recognize the courage, integrity, and professionalism of journalists with the BBG.

RFE/RL is a private, independent international news organization whose programs – radio, Internet, television, and mobile – reach influential audiences in 23 countries, including Russia, Ukraine, Iran, Afghanistan, Pakistan, the republics of Central Asia and the Caucasus. It is funded by the U.S. Congress through the Broadcasting Board of Governors.