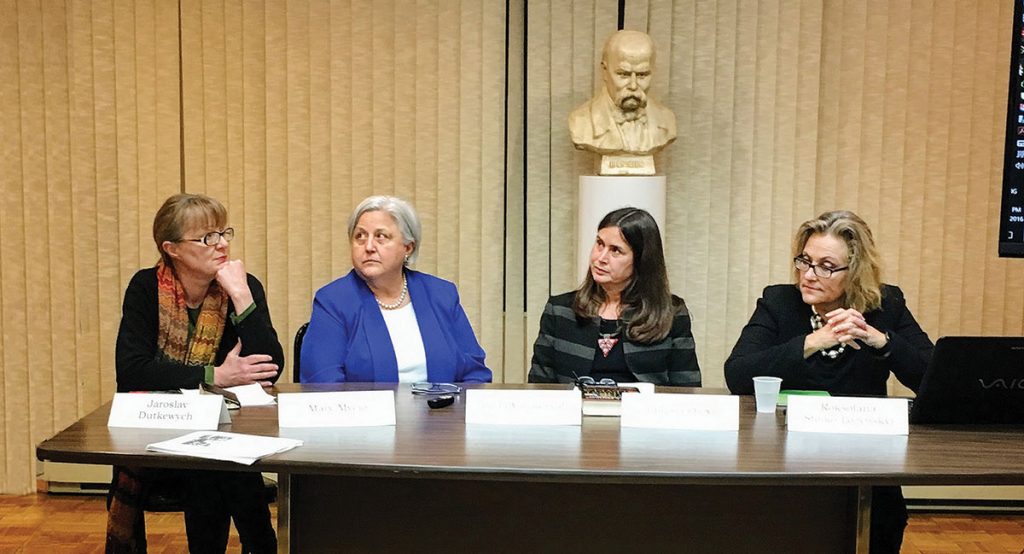 NEW YORK – A special Ukrainian Historical Encounters Series titled “Ukraine at 25: A December 1 Remembrance” was held at the Shevchenko Scientific Society to commemorate the 25th anniversary of the December 1 national referendum, during which more than 91 percent of Ukraine’s electorate voted to confirm Ukraine’s August 24 declaration of independence.

The Historical Encounters Series event brought together scholars, diplomats and eyewitnesses of the events that led to Ukraine’s renewed independence.

Dr. Walter Zaryckyj, program coordinator, opened the event and welcomed the packed hall of guests. “August 24, 1991, may have been the formal date of Ukraine’s declaration of independence. But 25 years ago today – on December 1, 1991 – was the day when the Ukrainian nation actually confirmed the act, opening the door for recognition of the fact by the other nations in the world,” he underscored.

The President of the Ukrainian National Women’s League of America, Marianna Zajac, chaired the first session titled, “August 1991 in Ukraine: As it Happened.” Ms. Zajac underscored that the forum was the culminating event dedicated to the 25th anniversary of Ukraine’s independence and followed a symposium held in September at the Princeton Club to mark the historic anniversary. She introduced the forum’s first distinguished speaker, Taras Hunczak, professor emeritus of Rutgers University.

Dr. Hunczak provided historical context by relaying several personal stories of his participation as an eyewitness to the dramatic events of 1991, including the Verkhovna Rada’s adoption of the Act of Declaration of the Independence of Ukraine and his participation in monitoring the historic December 1 national referendum.

Before introducing the second speaker, panel chair Ihor Dlaboha, editor-in-chief of “The Torn Curtain” blog, harkened back to the New York community’s reaction to the August 24 and December 1 events. The Ukrainian diaspora immediately transitioned from fighting for the independence of Ukraine to solidifying independence. In New York, “the community eagerly rendered ceaseless support to the diplomats and staff of the Permanent Mission of Ukraine to the United Nations, which had shed its ‘SSR’ tag. Likewise, the Ukrainian diplomats began to meet with community members and plan joint activities.”

In 1992, the community’s traditional commemoration of independence on January 22 in the halls of the U.S. Congress in Washington were filled to capacity as participants gathered to hear Ukraine’s permanent representative to the U.N., Ambassador Hennadiy Udovenko, and former independence activist and Soviet political prisoner Stepan Khmara speak about Ukraine’s struggle for liberty and goals for the future.

The featured speaker of the second panel, “Ukraine 25 Years Ago –The December 1 Referendum,” Ambassador Valeriy Kuchinsky, is a distinguished Ukrainian foreign service career officer who served as permanent representative of Ukraine to the U.N. (2000-2006), and currently is adjunct professor at Columbia University. He began his presentation with the statement, “The historic Ukrainian referendum of December 1, 1991, became the second most important event after the declaration of independence that, in fact, legalized Ukraine’s independence and paved the way for international recognition of a new state.”

Ambassador Kuchinsky provided a thorough political analysis of this time, acknowledging that despite Soviet leader Mikhail Gorbachev’s efforts to endorse the All-Union Treaty by attempting to disrupt the Ukrainian referendum, both the referendum and presidential elections in Ukraine were held. He offered an analysis of the situation, which he called the “Great Compromise,” stating “for most of the former Communist elite – independence became a new religion, and Kravchuk its prophet.” Leonid Kravchuk would save them from Moscow’s rage, as well as protect them against the anti-Communists – democrats and nationalists – in Ukraine.

Mr. Kravchuk and independence were complementary parts of the ticket that would allow the former Communist elite to stay in power under a different name. They would do anything to support independence if Mr. Kravchuk became president and likewise do anything to undermine it if he lost to his rivals, Ambassador Kuchinsky observed.

By appearing to reject communism, they hoped to gain credentials as pro-Ukraine reformers and thereby remained in full control of the economic and administrative resources of the country. They could control the pace, scope and direction of any future changes in the country. “This turned out to be a crucial step and continues to plague the country to this day,” Ambassador Kuchinsky stated. “There was no political revolution in 1991” since the same people remained in power, rather “August 1991 marked a fundamental watershed in Ukrainian politics, in Ukrainian history. Ukraine suddenly became independent of Moscow and took an increasingly independent course.”

Mr. Dutkewych knew all of the panel’s speakers personally, a result of his many years of work in Ukraine, and noted that the panelists would present eyewitness accounts. Calling them pioneers from the diaspora, he also noted that most of the early pioneers were women.

The first to speak was Roksolana Lozynskyj, a political and international affairs specialist on the democratic movement in Ukraine, who also serves on the Executive Board of the Ukrainian Congress Committee of America as its director of external affairs. Ms. Lozynskyj opened the panel with her personal reflections on the situation in Ukraine during the glasnost period of the late 1980s and early 1990s. Working with Ukrainian human rights and independence activists, Ms. Lozynskyj said the groundwork was being laid to support independence, starting with the Chornobyl tragedy, which resulted in extreme outrage among the population – a fury that the Ukrainian activists realized could help to fuel their goals for Ukraine.

Along with her remarks, Ms. Lozynskyj showed a video montage of clips and key interviews with various activists of the late 1980s-early 1990s, that highlighted the growing groundswell of support for Ukraine’s renewed independence.

Next to speak was Irene Jarosewich, an editor and journalist, who was invited to work for Rukh, the Popular Movement of Ukraine. Arriving in Kyiv in July 1991, Ms. Jarosewich was tasked with managing the organization’s foreign media relations. In her remarks, which she accompanied with more than 50 photos from her experience, she spoke of Rukh’s role after the August 1991 coup, including Ukraine’s declaration of independence on August 24, the presidential campaign and the December 1 referendum, and tried to convey the excitement and tension of those autumn months.

“I have chosen to speak quickly, moving through many events,” she said, “since I was literally on the ground at many major moments, working with journalists. I want our guests to feel the rapid pace of developments. Rukh was essential in the process of confirming the vote for independence and, through Rukh, the world knew what was going on in Ukraine. The Communist Party was reluctant to speak with journalists. Several hundred foreign correspondents and representatives of diplomatic missions registered with the Information Division of Rukh – and through them our message was sent out worldwide.”

Following Ms. Jarosewich’s presentation, Mary Mycio, an attorney, book author and journalist, described how she became an expert on nuclear weapons in Ukraine. While researching Chornobyl in the late 1980s, Ms. Mycio discovered maps in security archives that showed locations of intercontinental ballistic missiles located in the Ukrainian SSR. “That’s how I became an ‘expert,’ ” she explained. “After Ukraine’s declaration of independence, I knew two facts about nuclear weapons when everyone else knew none.”

Ms. Mycio wrote about the intricacies of weapons systems and nuclear arms treaties as a reporter for the Los Angeles Times. She underscored that many of Ukraine’s challenges in contending with its inherited Soviet nuclear arsenal originated in the Ukrainian SSR’s Declaration of Sovereignty in 1990. “Under the emotional influence of the Chornobyl disaster, they declared Ukraine non-nuclear with absolutely no discussion whatsoever of the enormous technical and geopolitical challenges that would actually involve,” she commented.

Concluding the panel was Tamara Olexy, former president of the UCCA and a community activist, who reflected upon several specific episodes that had an important impact not only on her life but on her understanding of Ukraine’s renewed independence. She relayed personal stories of her time working with Ms. Jarosewich at the Rukh Press Center, drafting English-language slogans for signs intended to greet President George Bush on his one-day visit to Kyiv on August 1, 1991, many of which were quoted in subsequent international news reports and historic recollections; her participation in the Dzvin cultural walk through the southern oblasts of Mykolayiv and Kherson that included a night spent in a militia’s holding cell in Perevomaisk, a city closed to the public because of the intercontinental ballistic missile silos located within; as well as her attendance at the second Chervona Ruta Festival in Zaporizhia, a highly Russified industrial city, known throughout the Soviet period as the “cradle of the proletariat.”

“Twenty-five years ago, I have to admit that I was more optimistic than I probably should have been – I should have realized that the fall of the Soviet Union would not turn a newly reborn country into a prosperous nation overnight – but 25 years is a short period of time in the bigger scheme of things. And, although probably too slow for our liking, Ukraine has made incredible strides – and it is time for the community to work together to help further Ukraine’s reform efforts and to press for continued U.S. support for our homeland Ukraine. It is time we speak with one unified voice.”

Introducing the final session “Reflecting on Ukraine: December 1 – 25 Years Later,” was chair Myron Rabij, a global partner with Denton’s, the world’s largest international law firm. Mr. Rabij worked in Ukraine for more than 22 years. He reflected upon the last 25 years and highlighted the obstacles Ukraine faced in 1991-1992, many of which remain: threats from an aggressive neighbor; the entrenchment of old elites; the status of Crimea and the need for reforms and support from the West, particularly the U.S.; and the challenges ahead.

He added, “Twenty-five years have brought a new generation of young people into the forefront of society – those that never lived under the USSR and know of it only from history class, and others who can barely remember it and frankly know August 24 and December 1 as simply incontestable historical dates. Those young people are now fighting for their country and are building their country (whether at the ATO, in government or in open society) – the only one they have really ever known – with no nostalgia or connection to the Soviet past. That is the legacy of December 1: their present and their future.”

Mr. Rabij introduced the evening’s final speaker, Ambassador Yuriy Sergeyev, who is currently senior fellow at Yale University MacMillian Center and served for nearly three decades as a Ukrainian diplomat, including as permanent representative of Ukraine to the United Nations (2007-2015).

Ambassador Sergeyev brought the evening full circle, tying all of the presentations together. He reminisced about a meeting he had several years after independence with Condoleezza Rice, the author of President George Bush’s infamous “Chicken Kiev” speech. During the meeting, he asked Dr. Rice why she cautioned Ukraine against “suicidal nationalism” in that speech. Dr. Rice responded that in those days the presidential administration was genuinely unsure where Ukraine stood. In April 1991, Ukraine was one of nine republics that agreed to hold a referendum on the All-Union Treaty, unlike the Baltic countries, Georgia and even Moldova who already wanted out of the USSR. She also noted that a peaceful break-up of a nuclear-armed Soviet Union was not so obvious in 1991 and from a U.S. security perspective, dangerous.

Ambassador Sergeyev underscored his regrets that Rukh and presidential candidate Vyacheslav Chornovil, whom he considered to be a true leader, did not push further and mobilize the population to force communists to relinquish power fully, instead agreeing to a compromise. He said he believes the consequences of the compromise between the nationalists and Communists still haunt Ukraine. Such contradictory positions taken by Ukraine – from voting for the union treaty to the declaration of independence in 1991, to remaining a member of the Commonwealth of Independent States yet pushing for European Union association – continue to hamper Ukraine’s progress towards becoming a truly independent and democratic nation.