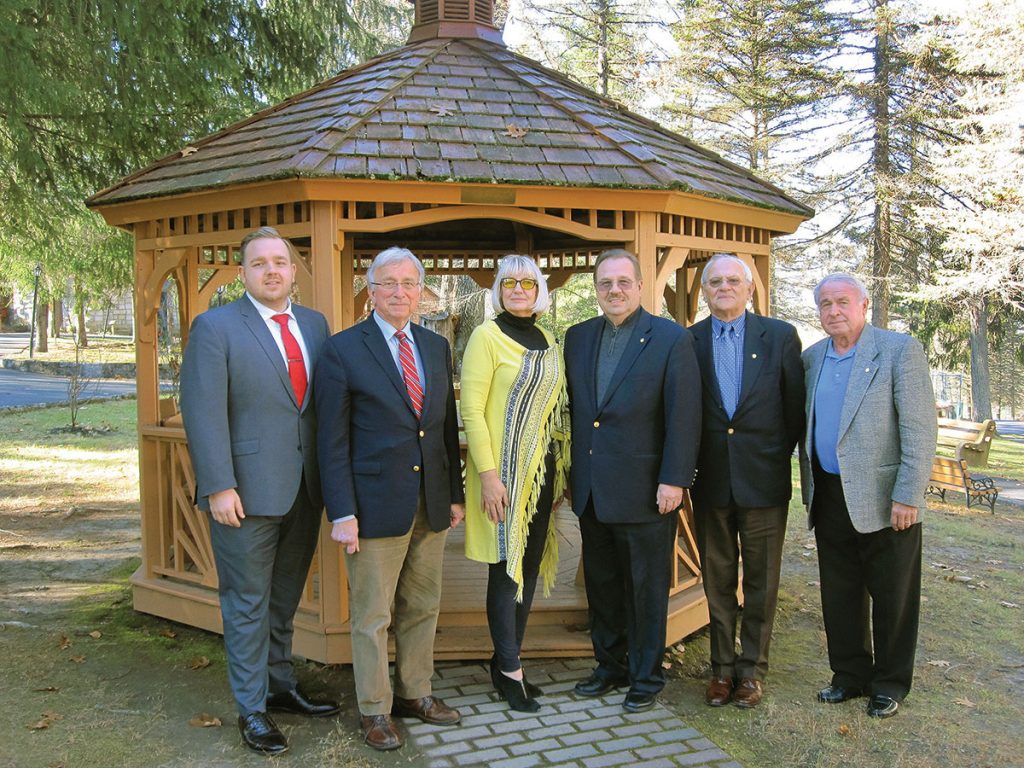 The business sessions were marked by good news about the UNA’s continued progress during 2016 – the fourth year in a row that the fraternal organization has enjoyed net profits. In addition, during the past year the UNA’s surplus has grown by nearly $1 million and is projected to stand at $9.3 million by the end of the year.

Reports were delivered by the full-time executive officers of the UNA, President Stefan Kaczaraj and Treasurer Roma Lisovich, as well as Deputy National Secretary Yuriy Symczyk, who was elected by the General Assembly to serve as national secretary. All other General Assembly members – executive officers, advisors and auditors – as well as the editor-in-chief of the UNA’s official publications, Svoboda and The Ukrainian Weekly, had the opportunity to deliver addenda to their written reports.

At the beginning of the annual meeting, General Assembly (GA) members heard a presentation on the UNA’s investment policy and strategy, which was delivered by Larry White, the managing director and co-founder of AQS Management who is the UNA’s asset manager. Mr. White explained the metrics of the UNA’s investment portfolio from 2015 to date and spoke in detail about the UNA’s diversified holdings. Mr. White noted that when his company began managing the UNA’s portfolio in 2008, the association had nearly $80 million in assets; today it has assets of just under $200 million.

Afterwards, GA members listened to a presentation by Advisor Szul, a lawyer, which updated them on the corporate governance structure that will be required in the near future of all fraternal societies and the UNA’s next steps toward implementing it, including revisions of the association’s by-laws.

The day ended with the calling of General Assembly committees, Organizing/Fraternal, Publications/Advocacy and Financial, and the groups began their separate meetings that evening.

The second day of GA meetings was marked by full-time executive officers’ reports, as well as addenda to reports submitted by other executive officers, advisors and auditors. The editor-in-chief of the UNA’s two newspapers focused on the highlights of her written reports and new developments since that report was submitted.

President Kaczaraj noted the positive trends in the UNA’s surplus, which, as of September 30, 2016, stands at over $9.1 million and has been increasing annually for the past four years. The UNA’s top executive said, “This indicates that the UNA is moving in the right direction thanks to a competent and dedicated staff at the Home Office.”

Mr. Kaczaraj reported on his community activity as president of the UNA, noting that he chairs the National Council of the Ukrainian Congress Committee of America and that he was present at a number of important UCCA-organized meetings, including those with President Petro Poroshenko of Ukraine.

In addition, the president reported that the number of print subscriptions to the UNA’s newspapers was down, while the number of online subscribers continues to grow.

Newly elected National Secretary Symczyk opened his report by thanking GA members for their trust and for giving him the opportunity to further serve the UNA in his new role. He went on to speak of the outlook for 2017, noting that “member retention and membership growth will be the key to our future success.” Mr. Symczyk said he sees the need for training sessions for branch secretaries, as well as for an evaluation of all UNA branches and districts with a view toward making adjustments in order to make them more active and successful in their work. He also said that the three in-house UNA executives will be working on a strategic plan for the UNA.

Mr. Symczyk reported the organizing results for the first nine months of 2016: branch secretaries enrolled new members for a face amount of insurance totaling $1,248,000; Home Office employees sold policies for $985,230 of insurance coverage; and independent agents sold policies for $787,000. He also noted that the total of new business annuity premium for the first nine months of this year was $1,404,930, as compared with $127,262 for the same period a year earlier. That, he explained, is due to the UNA resuming business in the annuities market and the higher rates now offered.

Mr. Symczyk expressed special thanks to the UNA Home Office staff for their patience, loyalty and perseverance in “confidently managing every challenge” the organization faced during the past nine months at a time of uncertainly due to the illness and subsequent death of National Secretary Kozak.

The new national secretary also reported that he and Treasurer Lisovich had participated in the annual meeting of the American Fraternal Alliance held in September. The following month he was elected to the board of directors of the New Jersey/New York Fraternal Alliance.

Treasurer Lisovich told the assembled UNA’ers that the association’s net income reflects four consecutive years of net profits, and that the UNA “continues to benefit from a strong investment portfolio, which has withstood the pressures of the financial crisis and the subsequent languishing market.” She reported that general administration and fraternal benefit expenses were below target – another good piece of news. She also cited the growth in the UNA’s surplus, which surpassed expectations, and noted that building that surplus continues to be a primary goal.

Turning to the matter of sales, Ms. Lisovich said the UNA needs new plans and proper strategies to improve its results in that sphere. Among those plans, she said, is the search for Ukrainian insurance agents who are of Ukrainian descent and could sell UNA products even part-time.

As for the UNA’s community involvement, she pointed to successful steps in restoring the 122-year-old association’s position in the community “as a leader and a player.” She cited as examples the UNA’s various community outreach initiatives, ranging from representation and participation at community gatherings to sponsoring and printing programs for various cultural events; and the UNA’s involvement in public advocacy.

Not far down the road, Ms. Lisovich continued, lies another challenge: implementing a corporate governance structure that will be required in accordance with a decision of the National Association of Insurance Commissioners.

Ms. Lisovich concluded her report by underscoring that the UNA will concentrate on growing its core business – life insurance – in order to create a stable foundation; will design and retool itself to meet current challenges; and is slowly and steadily moving toward a path to prosperity.

Also reporting to the General Assembly was the Auditing Committee, which recently conducted a review at the UNA Home Office. Speaking on behalf of the committee was Chairman Tysiak, who described the most recent audit of the UNA’s contract for management services for the Ukrainian National Foundation and said that a draft report was sent to the UNA Executive Committee for its members’ review and comment. The report will then be issued to the General Assembly.

The editor-in-chief of Svoboda and The Ukrainian Weekly, Ms. Hadzewycz, presented the most significant parts of her report, She informed GA members of the staffing situation at the UNA’s two newspapers, praising her colleagues for going above and beyond in fulfilling their responsibilities. The most important development of the past year, she said, was the introduction in September of the new design for the newspaper’s website, fulfilling a key recommendation of the Publications Committee from the 2015 annual meeting of the UNA General Assembly. The new design mirrors that introduced for The Ukrainian Weekly in June 2014.

She noted the passing of not only Ms. Kozak, who worked closely with the UNA’s newspapers, but also of others associated with them: long-time correspondent of Svoboda and former editor of The Weekly Rostyk Chomiak; Luba Lapychak-Lesko, longtime administrator of the publishing house and print shop of Svoboda and Тhe Weekly; former editorial staffer Lubov Kolensky; and Orysia Paszczak Tracz, a longtime columnist for The Weekly, who had passed away just over a week earlier.

For the first time in 2016, after several years of the editor-in-chief pushing for this, both newspapers ran the special section on UNA scholarship winners in their issues released in time for Labor Day weekend, Ms. Hadzewycz said, thus providing an excellent opportunity for the UNA to present itself in a most positive light to the hundreds of youths gathered at Soyuzivka for that holiday weekend.

Also noteworthy during the report period was the increase in news from diverse venues, for example, the Ukrainian communities in Portugal and Italy. In the past, Svoboda had carried stories from Israel, England, Sweden, Poland, France, Finland, Estonia, Australia, Russia, Belgium, Argentina and others. The ultimate goal is to get more news from diaspora communities worldwide in order to make Svoboda a global newspaper, the editor-in-chief said.

In the closing sessions of the annual meeting, General Assembly members heard the reports of the Organizing/Fraternal, Publications/Advocacy and Financial committees.

The Organizing/Fraternal Committee (Mr. Symczyk, chair; Mmes. Horbaty, Streletsky, Walchuk, Keske and Czerkas and Messrs. Pishko, Koziupa, Fil and Oscislawski, members) recommended that training courses be held for organizers, as well as branch secretaries and district leaders; that the UNA brand needs to be bolstered, including through improvement of its website; that the UNA conduct more outreach to various audiences, for example, parents of students enrolled in schools of Ukrainian studies; that marketing and promotional materials be provided to districts and branches for use in their respective communities; and that Dr. Myron B. Kuropas’s book on the UNA’s history be updated for the association’s 125th anniversary (2019).

The Publications/Advocacy Committee (Mmes. Hadzewycz, Czerkas, Horbaty and Puzyk, Messrs. Koziupa, Pishko and Symczyk, members) recommended that a free three-month trial subscription, in digital form, to either of the UNA’s newspapers be provided to new members; that such trial subscriptions be subject to automatic renewal via credit card; that a reduced cost for digital subscriptions in countries outside of North America be examined; and that member organizations of the Ukrainian World Congress, that is, representations of Ukrainian diaspora communities, be encouraged to submit information on their activities to Svoboda.

After the committee reports were accepted, General Assembly members discussed miscellaneous matters, among them: UNA programs at the Soyuzivka Heritage Center, such as Seniors’ Week and the Adoptive Parents Weekend; promotion of the UNA and the Ukrainian National Foundation at Soyuzivka during the summer; reactivation of UNA branches; and encouragement of UNA’ers of the younger generations to become involved in the organization with a view toward the next UNA convention in 2018.

After adjournment of the meeting, the UNA’ers enjoyed a festive dinner prepared by the Soyuzivka staff.