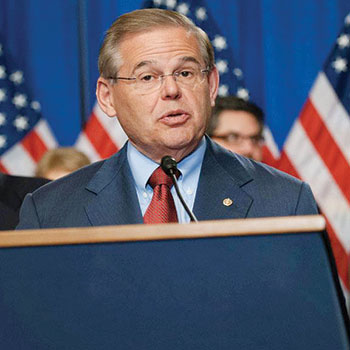 The meeting was coordinated by Mr. Symczyk at the senator’s request. Its purpose was to discuss the Ukrainian American community’s deep concerns regarding the nomination of Rex Tillerson to be the next U.S. secretary of state and the potentially damaging impact his confirmation could have on Ukraine’s struggle to maintain its territorial integrity and independence.

The UABA respectfully submitted to the senator proposed areas of questioning during the confirmation process of Mr. Tillerson with background briefing material for the senator’s consideration and review in preparation for the hearings before the Senate Foreign Relations Committee on January 11.

[Editor’s note: At that hearing, Sen. Menendez repeatedly challenged the nominee on his views about Russia and U.S. policy toward the country, including sanctions. He also elicited a surprising response from Mr. Tillerson, who said he had not yet discussed Russia policy with President-elect Donald J. Trump.]

The briefing documents submitted by the UABA emphasized that The United Nations Charter, the Helsinki Final Act and the various organic documents of the European Union, have had as their linchpin the principle of territorial integrity and security, and the inviolability of borders of independent states have maintained peace and stability on the Eurasian continent for decades.

Moreover, 22 years ago, under pressure from the United States, Ukraine agreed to surrender and destroy its nuclear arsenal. All that Ukraine asked in return was to be given security assurances as to its sovereignty and territorial integrity by the United States, Russia and the United Kingdom upon its accession to the Non-Proliferation Treaty as a non-nuclear weapon state. These security assurances were given on December 5, 1994, and are commonly known as the Budapest Memorandum.

Based on the assurances from all the signatories and with specific reliance on these declarations by each of the signatory states, Ukraine surrendered approximately 1600 nuclear warheads. Russia’s annexation of Crimea and its military invasion into eastern Ukraine constitute overt and blatant violations of these basic agreements and evidence the Kremlin’s intentional defiance of international rule of law.

Sen. Menendez said he recognizes that if the United States fails to take any additional more meaningful and effective action in response to Russia’s annexation of Crimea and its military invasion into eastern Ukraine in violation of international rule of law, it would corrode and undermine America’s credibility in the international arena, destabilize Europe, and greatly fuel Russian international adventurism and expansionism.

After the meeting, Sen. Menendez held a press conference.