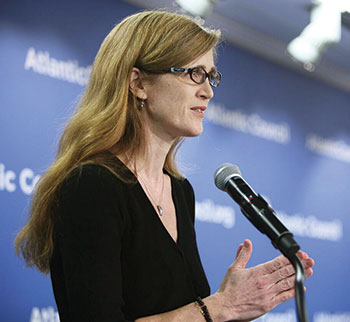 WASHINGTON – The outgoing U.S. ambassador to the United Nations has accused Russia of engaging in aggressive and destabilizing actions that she says are threatening the rules-based international order.

Samantha Power made the remarks on January 17 at the Washington-based Atlantic Council in her last major speech as U.S. ambassador to the United Nations.

She cited the illegal seizure by Russia of Ukraine’s Crimean peninsula and the Kremlin’s intervention in the conflict in eastern Ukraine, support of the Syrian government in that country’s war, and efforts to influence elections in Western democracies through computer hacking and misinformation campaigns designed to influence public opinion.

Ambassador Power said: “Russia’s actions are not standing up a new world order. They are tearing down the one that exists.”

Based on reporting by Russia and AP