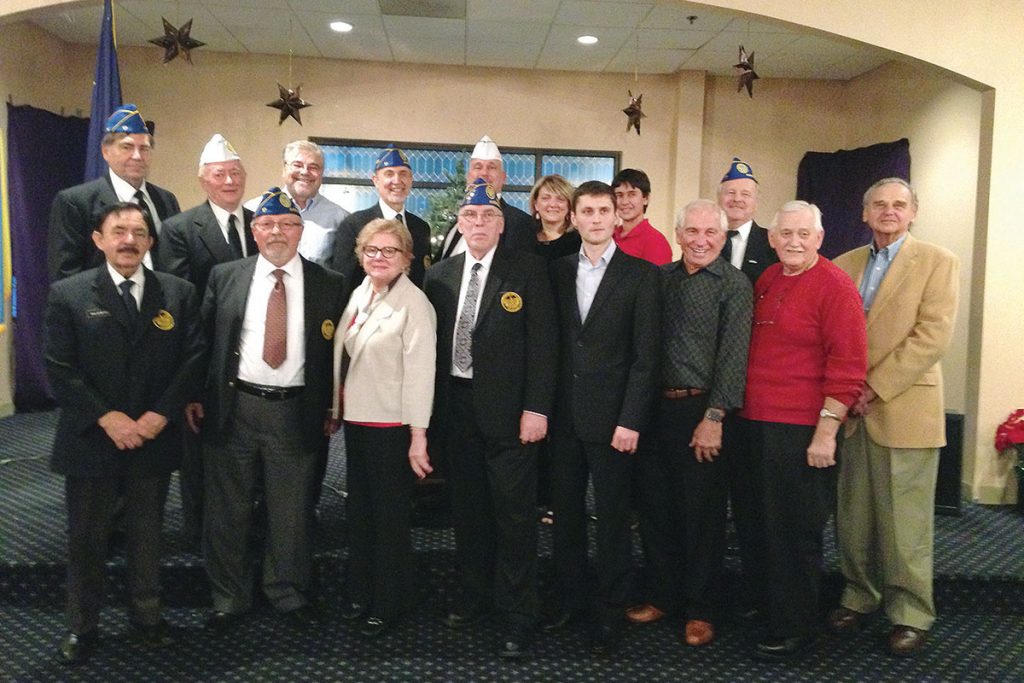 The festivities were organized and presided over by Post Commander Walter Kovbasniuk, who recognized several prominent guests, among them Dr. Olexander Ilchyk, who is starting a two-year residency in the United States studying battlefield medicine to provide care to Ukrainian army casualties conducting anti-terrorist operations (ATO) in eastern Ukraine,.

Mr. Kovbasniuk presented a commemorative Ukrainian American Veterans coin to Roma Hadzewycz, editor-in-chief of The Ukrainian Weekly and Svoboda, for her continuing support of the organization’s efforts.

The Ukrainian American Veterans (UAV) organization was represented by, among others, Michael Hrycak and Andrew Hadzewycz, commander and vice-commander, respectively, of the UAV New Jersey Department, as well as Ihor Rudko, commander of the UAV Connecticut Department and Post Commander Walter Kovbasniuk, Post 17 (Whippany).

Mr. Hrycak shared some memories of a Christmas he shared with fellow soldiers in Iraq 10 years ago, which included a fellow United States Military Academy classmate (class of 1981) of Mark “Franko” Paslawsky (who was killed in action during the battle of Ilovaysk on August 19, 2014, as member of the Donbas Battalion), emphasizing that all veterans are lucky to be with their families this Christmas.

The Christmas party is an annual event open to UAV members, as well as all veterans and their families. Membership in the UAV (see www.uavets.org for application) is open to all veterans of the U.S. Armed Forces of Ukrainian heritage, through blood or marriage, including those still serving on active duty (dues are waived for active-duty and 100 percent U.S. military disabled), either through a post or as a member at large.

To register any U.S. Armed Forces veterans of Ukrainian descent (UAV members and non-members alike), readers may contact: UAV National Registry, P.O. Box 172, Holmdel, NJ 07733-0172; telephone, 732-888-0494; e-mail, or uav.registration@verizon.net. The registry’s Volume I (1998 -2004), dedicated to World War II veterans, was published in 2004; Volume II, dedicated to Korean and Vietnam veterans, is in the process of being published; Volume III is being compiled. There is no fee to register. Families are invited to register their loved ones.