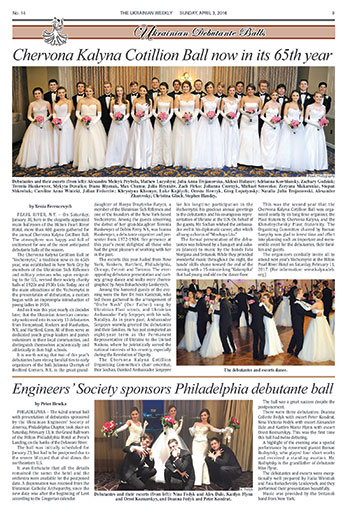 Nothing like starting the year off right! On January 30, Self Reliance New York Federal Credit Union made yet another generous donation to the Ukrainian National Association’s two newspapers, Svoboda and The Ukrainian Weekly, giving each $12,500. The $25,000 donation was noted in the Press Fund reports of both newspapers. (The credit union had made a donation for that same amount to Svoboda and The Weekly in late December 2014.)

Editor-in-Chief Roma Hadzewycz commented that Self Reliance’s donations “have gone a long way toward helping the newspapers continue their mission of informing the world about Ukraine and Ukrainians, and keeping Ukrainian communities in touch with each other.” Thanks to such donations, the complete archives of Svoboda and The Weekly were digitized, and the websites of the two newspapers were redesigned, giving them not only a new look but also a new functionality. (Take a look by visiting svoboda-news.com and ukrweekly.com.)

Self Reliance New York President Bohdan Kurczak wrote that the donation was meant to assist the further development of The Ukrainian Weekly and Svoboda. “We believe that thanks to the newspapers’ presentation of information and events via the Internet, devoted readers have been found not only in America, but throughout the world,” he noted.

He couldn’t be more right!

The Weekly has always encouraged readers and community activists to use our newspaper. In our editorial titled “News from your community” (September 11), we underscored: “We love working with our readers and community activists in producing each week’s issue of The Ukrainian Weekly. This type of collaboration benefits all and enriches our newspaper’s pages.” The editorial also pointed out: “…we always want to publish community news, but it quite often seems that local ‘hromady’ are content to communicate only among themselves instead of sharing the news with others. That is one of the main functions of our newspapers Svoboda and The Weekly. Please keep that in mind… . Such sharing of information and ideas benefits us all; it empowers us as a community and supports our community’s needs and aspirations.”

Our special issues of the year included: the four-part “2015: The Year in Review” published January 17 through February 7; the “Ukrainian Debutante Balls” issue dated April 3; our annual edition of “A Ukrainian Summer,” which this year comprised 24 pages in our May 1 issue; and our two Ukrainian Independence Day issues – spotlighting “Ukraine at 25” – that were dated August 21 and 28.

There were a number of special features during 2016, including “What’s brewing in Ukraine?” by Mike Buryk (yes, this was about beer) in the June 19 issue; and several photo reports on our community festivals, including the St. George Festival in New York City (June 5), Soyuzivka’s Ukrainian Cultural Festival (July 17 and 24), and the Ukrainian Festival at the Whippany-based Ukrainian American Cultural Center of New Jersey (October 23).

To mark the anniversary of the historic events of the Euro-Maidan-turned-Revolution of Dignity, we published a photo essay by Petro Matiaszek who reflected in photos and words on “Memories of the Maidan two years after.” Mr. Matiaszek wrote: “I will never forget my long walk home to the Maidan four days after the shooting stopped. As I made my way on February 24, 2014, down now hallowed Instytutska Street and across the Maidan, the silence and devastation were utterly unbelievable. There was almost nowhere to walk with so much debris and still-smoldering rubble. Scores of everyday people were walking about stunned and silent, some carrying flowers, all crying, stopping at the sites where there were still fresh puddles of blood, bullet-scarred lampposts and trees.”

To celebrate the 25th anniversary of the re-establishment of Ukraine’s independence, we ran a photo report about the momentous events of 1991 in Ukraine (August 21 issue), and in remembrance of the millions killed during the Holodomor, we published a full-page of photos from the memorial event held at St. Patrick’s Cathedral in New York (November 20).

Demographer Dr. Oleh Wolowyna weighed in during the year with two timely articles on Ukrainians in the U.S. during a presidential election year: “Support of Ukraine through political action” (January 17) and “The importance of voting” (July 10).

To be sure, there was much news during this very politicized year about the party platforms of the Republicans and the Democrats, and about the positions and statements of the presidential candidates. Two editorials published in July took a look at the platforms adopted at the two parties’ conventions.

The Weekly published a significant address by the well-known analyst Paul Goble, an expert on the USSR and the post-Soviet space, titled “Ten reasons why we must remain anti-communists” (July 10). The speech was delivered at the Victims of Communism Memorial Foundation’s Triumph of Liberty reception and dinner on June 9 in Washington. The next day, in recognition of his decades of work advancing freedom and opposing tyranny, Mr. Goble was awarded the foundation’s Truman-Reagan Medal of Freedom during a wreath-laying ceremony at the Victims of Communism Memorial.

As is now traditional, The Weekly marked its own anniversary in October with an editorial. The 2016 editorial, however, was dedicated to two anniversaries, as was evident from its title, “The Weekly at 83; Svoboda at 123.”

“…As usual, we take the opportunity offered by the annual anniversary of our founding in 1933 to share some thoughts in this editorial space. This year, we thought it would be appropriate to also note the incredible 123 years of uninterrupted service to our community of our sister publication, Svoboda, founded in 1893. For those unfamiliar with our elder sister, that date – 1893 – seems astounding. And rightly so. How many newspapers can boast of such a history?

“And, in this day and age, when we see newspapers dying, or curtailing their publication, left and right, the fact that the Ukrainian National Association continues to publish Svoboda and The Ukrainian Weekly is not only noteworthy but praiseworthy as well. Clearly, our community still needs these two newspapers that have served Ukrainians for a combined 206 years. …”

Which brings us to a mention about The Ukrainian Weekly Press Fund. We received a total of $26,319 for all of 2016 (almost $4,000 more than in 2015). We greatly appreciate these donations, which ensure that our newspaper continues to be published.

During 2016 there was a changing of the guard for The Weekly in Kyiv. Our longtime correspondent Zenon Zawada, who at one time was chief at our Kyiv Press Bureau and more recently (since 2014) was a free-lancer based in the Ukrainian capital, decided to pursue other opportunities. We were thrilled to announce that he was replaced in July by veteran Kyiv-based reporter/editor Mark Raczkiewycz, who hails from Chicago and has 10 years of journalism experience in Eastern Europe. Our principal free-lance correspondent very quickly made his presence felt – getting the scoop on the appointment of Dr. Ulana Suprun, a Ukrainian American radiologist, as Ukraine’s deputy minister of health – and we trust readers are enjoying and benefiting from his fine reporting.

There was sad news to report about one of our columnists. Orysia Paszczak Tracz, a well-known writer and activist who specialized in Ukrainian culture and ethnology, died suddenly on November 10 in Winnipeg, Manitoba; she had been hospitalized briefly after suffering a stroke. An obituary in the Winnipeg Free Press noted that a local broadcaster had once called her “a walking, talking Ukrainian encyclopedia.” Her column for The Weekly, “The Things We Do,” was enjoyed by readers for many years. Many of those columns appeared in Ms. Tracz’s highly popular book “The First Star I See Tonight,” a collection of her articles on Ukrainian Christmas traditions. Less than two months before her passing, Ms. Tracz had been honored with two major awards of the Ukrainian Canadian Congress: the provincial Bulava Award in Manitoba and the national Taras Shevchenko Medal, the UCC’s highest honor.

The Weekly’s editor-in-chief also was honored this year, receiving the highest award of the Ukrainian Congress Committee of America, the Shevchenko Freedom Award, for “commitment to pursuing the truth regarding Ukraine.” The award was presented in September, during the Congress of Ukrainian Americans. At the same time, Ms. Hadzewycz received the Order of Princess Olha (third degree), which had been announced in an August 2015 decree by President Petro Poroshenko, for “contribution to strengthening the international authority of Ukraine, popularization of its historical heritage and modern achievements.” The Ukrainian state honor was presented by Ukraine’s Ambassador to the U.S. Valeriy Chaly at the congress banquet.

In concluding this last section of our “2016: The Year in Review,” we are pleased to report that the number of “Likes” for our Facebook page as of the end of 2016 was 7,029. In comparison, at the end of 2015 we had 4,300. We’d like to reiterate that what we do on Facebook differs greatly from what we offer on the pages of our newspaper. On Facebook, The Weekly shares links to interesting stories from a variety of sources, lets our friends know when a new issue becomes available online; and allows visitors to take a look at our latest front page. We encourage all our readers to subscribe to our newspaper and to like us on Facebook.

This edition of “The Year in Review” was prepared by Roma Hadzewycz and Matthew Dubas of The Weekly’s editorial staff; our part-time staffer Christine Syzonenko; our Kyiv correspondent Mark Raczkiewycz; our colleagues Chris Guly, Adrian Bryttan and Deanna Yurchuk; and Ihor Stelmach, our sports columnist. Credit for the layout goes to our design artist, Stepan Slutsky.

The articles in this yearender were prepared based on stories about developments in 2016 that were published in The Weekly. The materials used were articles written by our staffers and regular correspondents, news sources like RFE/RL and Eurasia Daily Monitor, and submissions by local community activists. A huge thank you is hereby sent out to all!