2016: Our community mourns their passing 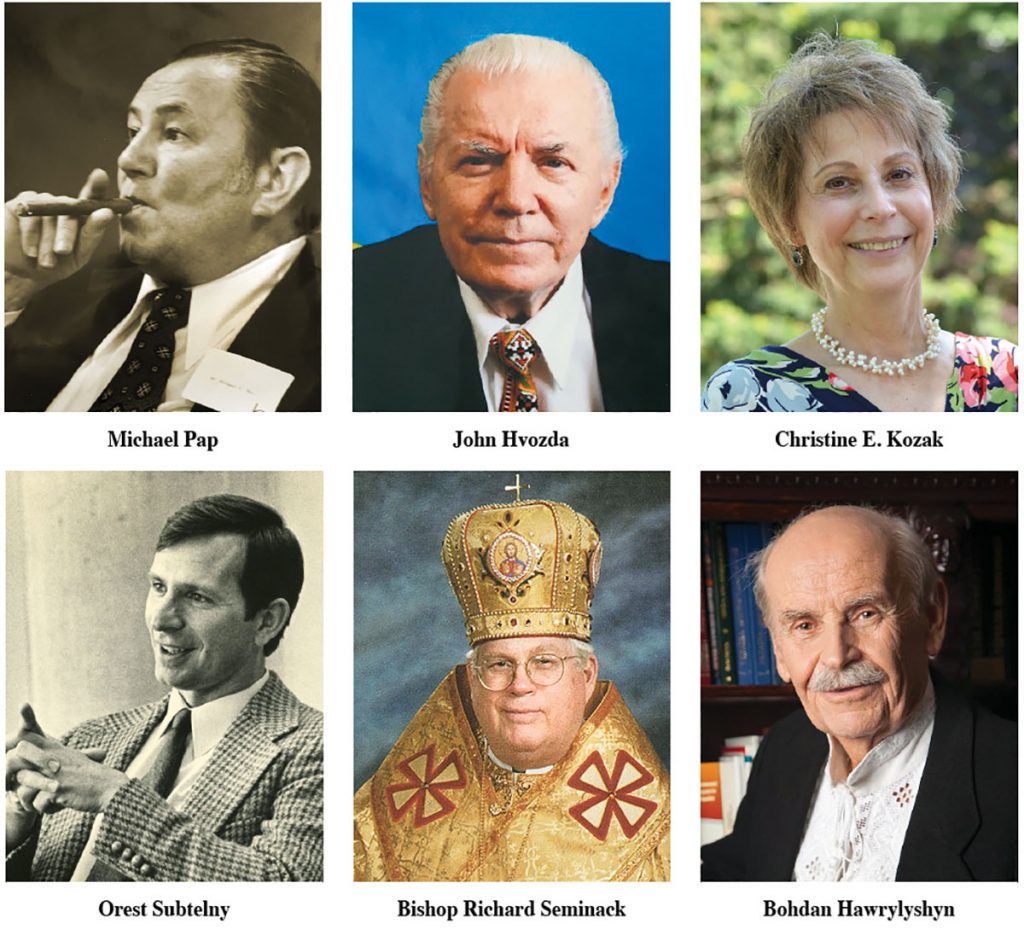 During 2016 our community mourned the passing of many of its prominent members: artists, church leaders, soldiers and community activists. Among them were the following, listed in order of their passing.

Orest Kaczmarskyj, 74, Centerville, Va; pursued an Army career after college, serving for 21 years as an infantry, logistics and foreign area officer throughout the world; known for his fluency in six languages and his intrinsic ability to quickly adapt to native dialects; recipient of the Legion of Merit, the Bronze Star Medal, Meritorious Service Medal, Air Medal, Army Commendation Medal, Vietnam Service Medal, and the Army Good Conduct Medal; with family, friends and soldiers in attendance, was buried with full military honors at Arlington National Cemetery on May 27 – January 8.

Sophia Lada, 74, Toronto, visual artist who explored several media – painting, iconography, textile art; commissioned by the Sisters of St. Basil the Great in Rome to decorate the chapel of their Motherhouse with icons in the Byzantine style; worked on many commissions and took part in various solo and curated group shows; her works are found in collections in Canada, the United States and Europe – February 14.

Walter Baranetsky, 96, Maplewood, N.J., longtime member of the Ukrainian Institute of America, who served multiple terms as president and vice-president; served as head of the non-profit Coordinating Committee to Aid Ukraine; provided invaluable philanthropic support for UIA initiatives in projects, especially those involving the preservation of the institute’s landmark building – February 18.

Ivan Lobay, 104, New Haven, Conn., worked as a university professor and mechanical engineer in Ukraine, Czechoslovakia, Germany, Venezuela, Algeria and the U.S.; was a professor at the College of Engineering at the University of New Haven for 15 years and taught post-graduate courses at Yale University; was appointed official consultant at the Ministry of Education of Ukraine in 1993, at the age of 82 – March 3.

Nina Ilnytzkyj, 91, Oradell, N.J., worked at Prolog Research and Publishing Corp. in New York from 1965-1990, where her duties included administering the journal Suchasnist, as well as translating, proofreading and editing; was instrumental in publishing the memoirs of UPA veteran Ivan Dmytryk, titled “In the Forests of the Lemko Region,” in 1976, as well as those of another soldier, A. Plechen, in 1987, titled  “Nine Years in a Bunker” – March 14.

Michael Pap, 95, Ishpeming, Mich., professor at Notre Dame University and at John Carroll University in Cleveland, where he founded the Institute for Soviet and Eastern European Studies in 1961, which became a center for scholarship and public outreach; served as director of human resources and economic development in the administration of Cleveland Mayor Ralph Perk in 1972-1974; founder and longtime head of the Ukrainian American Association of University Professors, president of the United Ukrainian Organizations of Cleveland 1969-1970; honored by the Ukrainian Congress Committee of America with its Shevchenko Freedom Award in 1964 – April 1.

John Shmerykowsky, 79, born in Yaremche, Ukraine; architectural engineer; partner at Weiskopf & Pickworth in New York before founding Shmerykowsky Consulting Engineers in 1966; led construction projects up and down the East Coast in addition to high-rises on Park Avenue, Fifth Avenue and Maiden Lane in New York; Fellow of the American Society of Civil Engineers; was actively involved in the Ukrainian Engineers Society of America and the Ukrainian Institute of America – April 2.

Bohdan Kotys, 89, Plainsboro, N.J.; earned a degree in architecture from the prestigious Karlsruhe Institute of Technology in Germany; worked as an architect in New Brunswick, N.J.; active in the Ukrainian Engineers’ Society and The Ukrainian Museum in New York, where he served on the board of directors in 1981-1986 and 1995-1998 – May 26.

Luba Lapychak-Lesko, 91, Morristown, N.J.; worked for the Ukrainian National Association 1950-1991; longtime administrator of the publishing house and print shop of the UNA’s newspapers, Svoboda and The Ukrainian Weekly – June 24.

Christine Kozak, 62, Pompton Plains, N.J.; national secretary of the Ukrainian National Association since 2002; oversaw the staff of licensed insurance professionals at the UNA Home Office in Parsippany, N.J. and organized insurance courses for the UNA’s branch secretaries; added several new policies to the UNA’s portfolio of products; produced the UNA’s life insurance illustration software, co-created the resource center for branch secretaries and field agents and created the UNA rate book tutorial; produced the “UNA and the Community” magazines in 2013 and 2014 – June 27.

Vasyl Slipak, 41, near Debaltseve, Ukraine; born in Lviv; considered a musical prodigy; graduated from the Lysenko National Music Academy; moved to France in 1996, where he had a successful career with the Paris National Opera for almost 20 years; in 2014, returned to Ukraine and joined volunteers fighting the Russian-backed forces in the country’s east, saying he was inspired to serve his country by the popular uprising on the Maidan; killed by sniper fire in an attack launched from Debaltseve – June 29.

Osyp Holynskyj, 92, Livingston, N.J.; born in the Sambir region of Ukraine; part of the post-World War II immigration to the United States; served as “khorunzhyi” of the 1st Ukrainian Division “Halychyna”; businessman and community activist – July 2.

Pavel Sheremet, 44, Kyiv; a Belarus-native killed by a car bomb in what was a most high-profile murder of a journalist; winner of numerous journalism awards during an illustrious career in Belarus, Russia and Ukraine (since 2011); founder of Istorychna Pravda, a sister site of Ukrayinska Pravda that is devoted to Ukrainian history; host of a weekday political talk show on Radio Vesti; blogger for Ukrayinska Pravda – July 20.

Orest Subtelny, 75, Toronto; noted historian and political scientist, university professor, scholar and author; completed his Ph.D. at Harvard in 1973, the first doctorate in the newly formed Ukrainian Studies Program; professor of history and political science at York University in Toronto from 1982 until retirement in 2015; author of six books on East European and Ukrainian history, the most important of which was “Ukraine: A History,” published in 1988; presented with the Order of Merit by the government of Ukraine in 2001; awarded the Shevchenko Medal by the Ukrainian Canadian Congress – July 24.

Lubov Kolensky, 93, Sloatsburg, N.Y., journalist, author; worked as an editor of Svoboda for 25 years; wrote novelettes, short stories, sketches, dramas and poetry, with several of  her works published by Svoboda Press; was recognized for her literary work in 1982 with an award from the Ivan Franko Literary Fund in Chicago – August 14.

Bishop Richard Seminack, 74, Chicago; fourth bishop of the Chicago Eparchy of the Ukrainian Catholic Church; ordained as a priest in 1967 and served the faithful in several Philadelphia-area parishes; served as chaplain for the Sisters of St. Basil the Great and campus minister at Manor College in Jenkintown, Pa., and chaplain in the U.S. Navy; ordained to the episcopacy by Cardinal Lubomyr Husar, then major archbishop of Lviv, on March 25, 2003 – August 16.

Joanna Ratych, 90, Somerset, N.J.; teacher of English and German in the displaced persons camp in Bayreuth, Germany; completed her doctorate at the Ludwig-Maximilian University in Munich, before emigrating to the United States; a professor of German language and literature at Rutgers University, where she was among the first tenured female professors and became the director of the Department of German Studies – September 5.

Bohdan Hawrylyshyn, 90, Kyiv, economist, thinker, benefactor and advisor; born in the Ternopil Oblast and uprooted by World War II, he immigrated to Canada; director of the International Management Institute in Geneva, 1968-1986; in 1988 helped found the International Management Institute in Ukraine, the first in the former USSR to offer an MBA program; authored two books and more than 100 academic articles on management and economic and political environment; helped found the World Economic Forum in Davos; consulted governments of various countries as well as corporations such as General Electric, IBM and Phillips; advised Ukraine’s first president, three prime ministers, and four chairmen of parliament – October 24.

Orysia Paszczak Tracz, 71, Winnipeg, Manitoba, writer, translator, researcher, lecturer and story-teller; accumulated a vast knowledge of Ukrainian traditions, ethnography and song; most recently published “The First Star I See Tonight,” a collection of her articles on Ukrainian Christmas traditions; translated 10 books from Ukrainian into English and wrote numerous articles for Canadian and American publications, including the column on why Ukrainians do “The Things We Do” in The Ukrainian Weekly; laureate of the Taras Shevchenko Medal awarded by the Ukrainian Canadian Congress, for “outstanding national contribution to the cultural and artistic development of the Ukrainian Canadian  community” – November 10.

Orest Rudzik, 80, Oakville, Ontario, professor, lawyer, community activist; active in the Civil Liberties Commission in 1984-1987, when the Ukrainian Canadian community challenged unfounded allegations about war criminals in their midst; spent a sabbatical year in Kyiv shortly after independence as director of law training for young Ukrainian professionals under the auspices of the Ukrainian Legal Foundation – December 8.