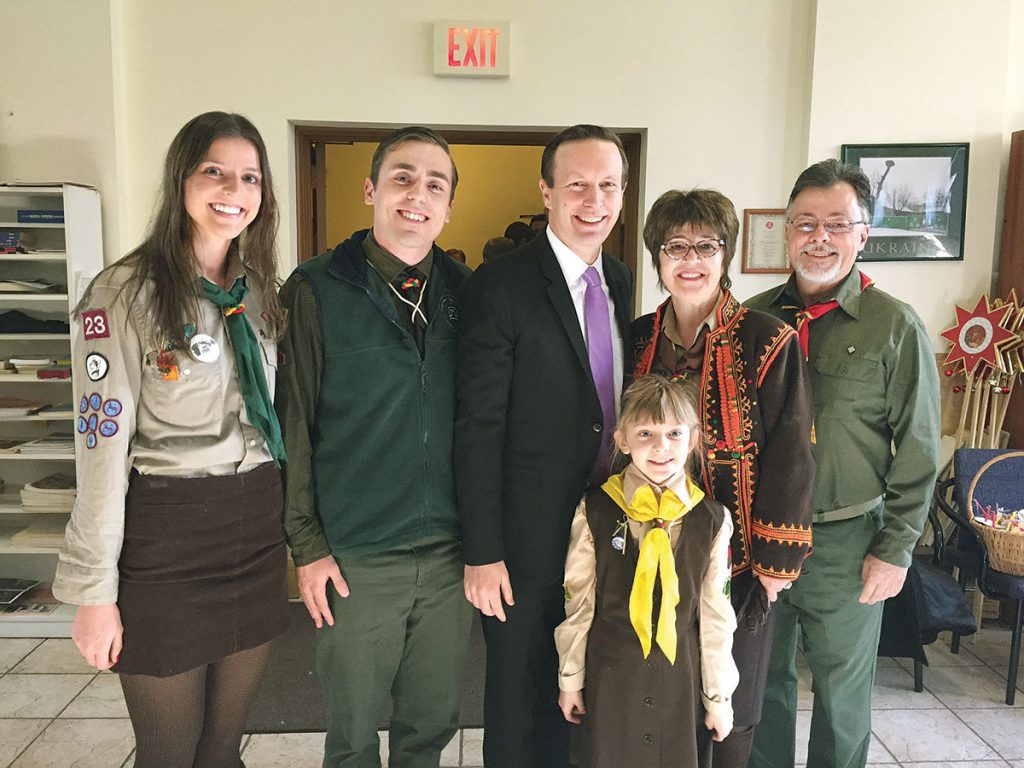 HARTFORD, Conn. – On Sunday, January 15, U.S. Sen. Chris Murphy (D-Conn.) visited St. Michael’s Ukrainian Catholic Church in Hartford to share his concerns about the security situation in Ukraine, and to share his perspective on the latest developments in Washington.

Sen. Murphy told the audience that he planned to vote against the confirmation of former Exxon-Mobil executive Rex Tillerson who had been nominated by President Donald Trump to serve as secretary of state. The senator stated that he had strong reservations about Mr. Tillerson’s affinity for Russia’s President Vladimir Putin, and his extensive business dealings with Russian oil and gas interests that could inhibit his ability to stand up to Russian aggression.

Since 2013, Sen. Murphy and other members of Connecticut’s Congressional delegation have been frequent visitors to Ukrainian churches in Hartford, New Haven and Stamford. Connecticut’s Ukrainian community activists have also made repeated visits to Washington and district offices in various Congressional districts, to insist on stronger U.S. support for Ukraine’s sovereignty, and humanitarian and military aid to help rebuild Ukraine’s economy and to help Ukraine resist attacks from Russian forces.

Sen. Murphy recalled his visit to Kyiv at the height of the Maidan – the Revolution of Dignity – in 2013, when he and Sen. John McCain (R-Ariz.) addressed a crowd of nearly a million protesters amassed on Independence Square.

In March 2015, Sen. Murphy held a joint town hall meeting with Sen. McCain at the Ukrainian National Home in Hartford to show bipartisan support for Ukraine’s sovereignty and united opposition to Russia’s annexation of Crimea and its continued terrorist activity in the Donbas region.

Sen. Murphy has made several return trips to Ukraine as a member of the U.S. Foreign Relations Committee.

During his latest visit to St. Michael’s Church, Sen. Murphy voiced deep concern about President Trump’s stated willingness to lift sanctions against Russia. The senator reaffirmed his commitment to resist any policy that might lend any legitimacy to Russia’s desire for a “sphere of influence” over Ukraine or other former Soviet republics, and he emphasized that sanctions against Russia must be kept in place until such time as Russia withdraws all its troops from Ukraine and respects Ukraine’s right to self-determination.

In response to a question from one of St. Michael’s parishioners, Ivan Kebalo, regarding European nations’ weakening resolve against Russia’s expansionism, Sen. Murphy reminded the audience that President Barack Obama was an “enthusiastic proponent” of sanctions and noted that it will take the same level of enthusiasm to keep European nations united against Mr. Putin’s machinations. Unfortunately, said Sen. Murphy, President Trump has expressed doubts about the vital importance of the NATO alliance.

Sen. Murphy also stated that Congress would hold hearings to determine the extent of personal and business ties between Mr. Trump, his surrogates and Russian oligarchs, to ensure that these have not compromised the president’s ability to put America’s interests first.