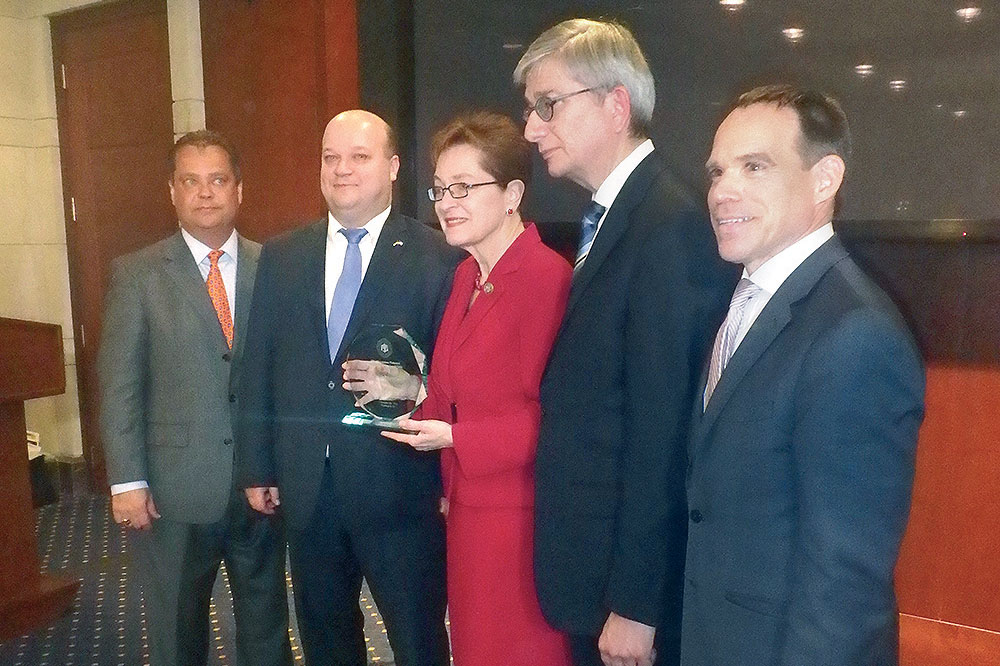 The Ukrainian Americans were also joined by community leaders from the Central and East European Coalition (CEEC), representing communities of Central and East European heritage, as well as the Syrian American community. Students from the Philadelphia-area Ukrainian studies school’s civics group also participated in the advocacy event. It was an opportunity for them to experience government civics in action.

“Normally, Ukrainian Days are held once a year and is a time during which Ukrainian Americans meet with their elected representatives to discuss concerns related to U.S.-Ukraine relations,” noted event organizer Michael Sawkiw Jr., executive vice-president of the Ukrainian Congress Committee of America (UCCA) and director of the Ukrainian National Information Service (UNIS), the UCCA’s public affairs office. “But, since the election of a new Congress and president in November 2016, as well as renewed Russian aggression in Ukraine, the past several months have been extraordinarily difficult for Ukraine and, once again, Ukrainian Americans must send the message that Ukraine’s fight for democracy and independence is not a battle that it can fight alone – Ukraine must be supported vigorously by the United States.”

The advocacy event began with a morning briefing session, which included presentations by former U.S. Ambassador to Ukraine John Herbst, director of the Dinu Patriciu Eurasia Center at the Atlantic Council, and former U.S. Ambassador to Georgia William Courtney, adjunct senior fellow at the RAND Corporation. Bishop John Bura of the Ukrainian Catholic Church, Philadelphia Archeparchy, led the participants in a prayer for Ukraine and the welfare of the Ukrainian American community.

Each speaker provided an overview of the current political climate between the United States and Russia, as well as a review of Ukraine’s reform efforts. Maintaining the sanctions regime against the Russian Federation is a high priority for Congress as evidenced by the many congressional bills that have been introduced. The speakers’ counsel for the advocacy participants was to concentrate their efforts on Congress with a message of why Ukraine’s sovereignty and independence are critical to U.S. national security interests.

Briefing papers were distributed to Ukrainian Days participants that included an analysis of “How Congress Can Assist Ukraine.” The briefing notes provided a summary of legislation that has been introduced in Congress since the beginning of the year: Russian Sanctions Review Act; STAND for Ukraine Act; Crimea Annexation Non-Recognition Act; as well as two resolutions calling for an end to the violence in Ukraine and expressing the unwavering commitment of the United States to NATO. A listing of the members in the Ukraine caucuses in the House of Representatives and the Senate was also circulated to encourage greater membership in these bipartisan legislative groups.

Most Members of Congress joined their respective staffers to acquaint themselves with the community representatives’ concerns about the current situation in Ukraine and acts of increased Russian aggression.

Students from the Philadelphia school also popped in to various congressional offices during their trek on Capitol Hill to advocate for greater U.S.-Ukraine relations.

Myron Kolinsky, a representative of the Connecticut Ukrainian community and a participant of Ukrainian Days held since the Revolution of Dignity, mentioned the importance of the advocacy events and making the effort to come to Washington: “The Connecticut community has met with its elected officials locally several times since the revolution in Ukraine. They recognize our concerns and are grateful for our advice and counsel. However, our concerns are amplified when we travel to Washington to relate the dire circumstances in Ukraine and the need for U.S. assistance. I urge everyone to participate in future Ukrainian Days advocacy events.”

The daytime advocacy activities were bolstered by an evening congressional reception held in the Capitol Visitor Center. Ukrainian Days participants and guests were warmly welcomed by UNIS Director Sawkiw, who introduced Bishop Paul Chomnycky of the Ukrainian Catholic Church, Stamford Eparchy, to deliver the invocation. Following the “Prayer for Ukraine,” Mr. Sawkiw introduced one of the newest co-chairs of the Congressional Ukrainian Caucus, Rep. Andy Harris, M.D. (R-Md.), who is of Ukrainian ancestry. The congressman expressed pride in his Ukrainian heritage and spoke of his trip to Ukraine in the summer of 2016 to visit his ancestral roots. Rep. Harris stressed the resiliency of the Ukrainian people and clearly stated that Congress, on a bipartisan basis, will stand with Ukraine to defend its sovereignty and independence.

In conjunction with each advocacy event, the Ukrainian National Information Service (UNIS) presents the “Friend of UNIS” award to those in Washington who have promoted or advocated for sustained support for Ukraine. This year, several Members of Congress were recognized for their support: Rep. Kaptur – for her leadership at the helm of the Congressional Ukrainian Caucus and numerous initiatives in support of Ukraine; and, Rep. Gerry Connolly (D-Va.) – for his sponsorship of the Crimean Annexation Non-Recognition Act in the U.S. House of Representatives.

The two honorees highlighted their work in Congress in defending international principles of freedom and sovereignty, noting that increased Russian aggression in the region must be stopped.

Ukraine’s ambassador to the United States, Valeriy Chaly, expressed his “gratitude to the U.S. Congress for its support of Ukraine throughout Ukraine’s 25 years of independence,” but most noticeably since the Revolution of Dignity. The ambassador acknowledged the increased levels of assistance to Ukraine in past years and urged increased measures to assist Ukraine in its reform efforts and security challenges.

UCCA President Andrew Futey and Ukrainian World Congress (UWC) President Eugene Czolij spoke next, expressing thanks and encouragement to the community participants of Ukrainian Days, and especially to members of Congress for hearing the Ukrainian American community’s pleas for assistance to their ancestral homeland.

Every four years, the UCCA presents the Shevchenko Freedom Award to those who have excelled in their support of Ukraine-related issues and took an active role in shaping policy towards Ukraine. Sen. Murphy was unable to attend the UCCA Congress in Hartford last year and was presented his award at the Ukrainian Days reception in Washington.

The senator was introduced by former UCCA President Tamara Olexy, who spoke of his many accomplishments in advancing Ukraine-related issues in Congress. The senator thanked the Connecticut community for its activism on Ukraine and pledged that he, along with his colleagues, will stand with Ukraine in its time of need.

Many congressional staffers and guests, such as representatives of the Syrian American community and the Central and East European Coalition attended the reception. The CEEC is a coalition of national ethnic organizations that represent between 20 million and 22 million Americans, and has been an ardent supporter of Ukraine and its struggles against Russian aggression.

On Thursday morning, advocacy participants divided into two groups to attend a House Foreign Affairs Committee hearing titled: “Undermining Democratic Institutions and Splintering NATO: Russian Disinformation Aims” and a briefing with Ukraine-desk officials at the U.S. Department of State. Both occasions were an opportunity for the community members to acquaint themselves with U.S. foreign policy objectives in the legislative and executive branches.

Testifying that morning at the hearing were: Toomas Hendrik Ilves, former president of the Republic of Estonia; Lincoln P. Bloomfield Jr., chairman emeritus and distinguished fellow at The Stimson Center , former assistant secretary for political military affairs at the State Department; Peter B. Doran, executive vice-president at the Center for European Policy Analysis; and Ambassador Daniel Baer, former U.S. representative to the Organization for Security and Cooperation in Europe.

Members of Congress questioned the witnesses about Russia’s disinformation campaign in Europe aimed at de-stabilizing NATO and other European allies.

The two-day advocacy event concluded with a briefing session at the Embassy of Ukraine. Ambassador Chaly thanked the participants for their endeavors to advocate for greater assistance to Ukraine and for not forgetting about the illegal annexation of the Crimean peninsula. UWC President Czolij and UCCA President Futey expressed their gratitude for the efforts of everyone who came to Washington to promote the concerns of the community and seek further assistance from the U.S. government. UNIS Director Sawkiw commented that “all politics is local,” noting that Ukrainian Days must continue on a local level through regular meetings with elected officials, and he encouraged his audience to use the local media to disseminate information about Russia’s aggression in Ukraine.

As March 9 is known as “Shevchenko Day” since it is the birthdate of Ukraine’s greatest bard, Taras Shevchenko, the Ukrainian Days participants and Ukrainian Embassy personnel assembled at the Shevchenko Memorial in Washington. Flowers were laid at the monument to honor the ardent 19th century defender of Ukraine’s freedom by the ambassador of Ukraine and his wife, Ludmila Mazuka, as well as by UWC President Czolij and UNIS Director Sawkiw.

Bishop Bura offered a prayer for peace in Ukraine, while Ambassador Chaly and Mr. Czolij presented brief remarks on the life and work of Shevchenko. The day concluded with the singing of the Ukrainian national anthem.