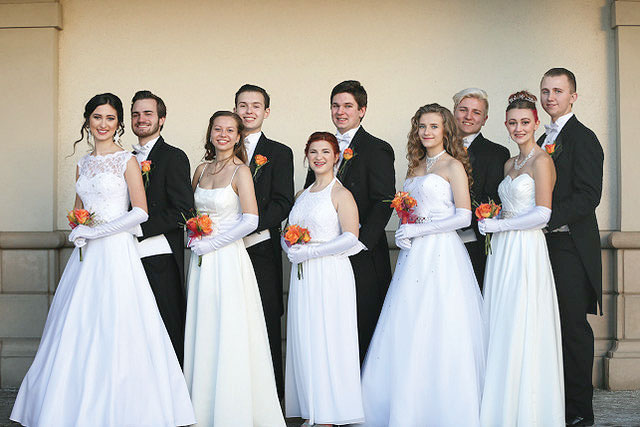 INDEPENDENCE, Ohio – The Plast sororities Buryverchy and Shostokryli hosted their debutante ball at the Holiday Inn – Cleveland South, in Independence, Ohio, on February 18. This year, five young women, all in their lovely white gowns and accompanied by their escorts, were presented to Cleveland’s Ukrainian community before a packed ballroom.

The evening began as emcees Maria Zachary Kyffin (of the Buryverchy) and Taissa Zappernick (of the Shostokryli) presented the debutantes as they walked in, listing each one’s many accomplishments.

Approximately 300 dinner guests, some from as far away as Arkansas and Ontario, watched as each debutante walked to center stage on the arm of her father to take the traditional bow before many family members, friends and guests.

Right afterwards, the band Klopit from Chicago started the “zabava” (dance) with expert playing that kept everyone on the dance floor for the entire evening.

At their presentation, the debutantes were encouraged to continue their activity in the Ukrainian community of Greater Cleveland. Each debutante was presented with an original woodcut depicting a traditional Ukrainian “Tree of Life,” created by local artist and member of the Buryverchy Daria Hulak Kulchytsky.

Many guests, especially the youth, danced well into the night to the lively music of Klopit, making this debutante ball a lasting memory for the debutantes, their families and guests.