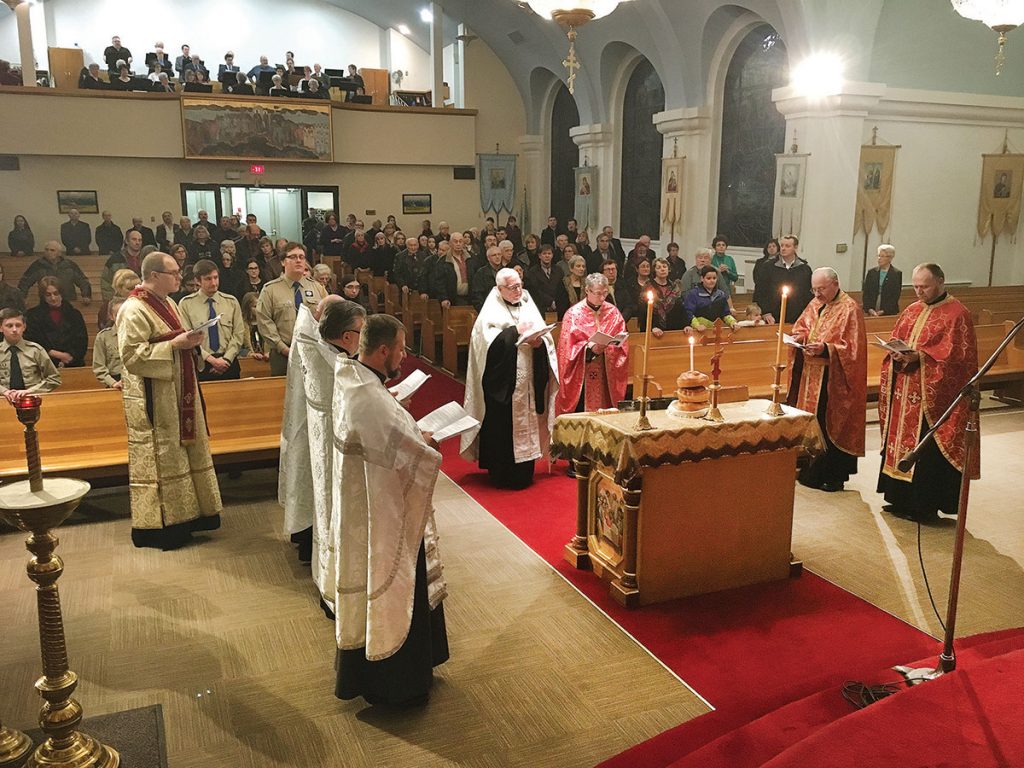 The choir of St. John’s Orthodox Cathedral sang the Panakhyda and led the faithful present in prayer.

A brief and meaningful homily delivered by Father Zubritsky discussed the importance of giving of oneself. He noted how those who had died on the Maidan and those who have died since defending Ukraine against Russian aggression have sacrificed everything, giving their lives for their native land. He reminded the congregation that, particularly during the upcoming Lenten period, it is our opportunity to give as well.

After the service, a short program was held at St. John’s Cultural Center. Young adult members of the Edmonton chapter of the Ukrainian Youth Association participated, providing a symbolic honor guard. Master of ceremonies for the evening was Taras Podilsky, executive member of the Edmonton chapter of the League of Ukrainian Canadians. He spoke movingly about the spontaneous awakening of the Ukrainian people in the winter of 2014 that has come to be known as the Revolution of Dignity.

The attempt by government forces to suppress peaceful mass demonstrations that erupted when President Viktor Yanukovych refused to sign the Association Agreement with the European Union ended with the death of over 100 unarmed protesters who are known as the “Nebesna Sotnia” – the Heavenly Brigade. Mr. Podilsky said the slaughter of these unarmed citizens on the Maidan in Kyiv has inspired the Ukrainian nation to continue its struggle for dignity and for a nation founded on respect for human rights, democratic principles and justice.

The keynote speaker for the evening was Edmonton radio personality and lifelong community volunteer Roman Brytan. He recounted the historic events of the Revolution of Dignity and the subsequent killings of protesters and eloquently presented a rich collection of commentary, excerpts and quotes by numerous writers, authors and journalists who analyzed and memorialized the events of the Maidan.

Four students of the Ivan Franko School of Ukrainian Studies presented moving poems written since the events of the Maidan. Natalya Kohut read the now well-known poem “Mamo, Ne Plach, Ya Povernusia Vesnoyu” (Mother, Do Not Weep, I Will Return in the Spring) by Oksana Korabel. Kiara Berezovsky read the very poignant “A Sotniu vzhe Zustrily Nebesa” (The Heavens Have Already Met the Brigade) by Liudmyla Maksymiuk. The poem “Heroyam Nebesnoyi Sotni” (To the Heroes of the Heavenly Hundred) by Lubov Hrynyk was expressively recited by Solomia Myc. The poem “Plyvut Hroby Po Moriu” (The Graves Float on the Sea) by Mariana Savka was touchingly delivered by Adrianna Dzus.

Several video clips about the Heavenly Hundred and the Maidan were interspersed with the poems. The visual and musical selections were stirring reminders that the brutal killings on the Maidan that outraged the Ukrainian nation, were only the beginning, as Ukraine is now in the third year of its fight against Russian aggression.

The evening was concluded with the singing of Ukraine’s spiritual hymn “Molytva za Ukrayinu” (Prayer for Ukraine) by Mykola Lysenko and the Ukrainian national anthem.

Donations were solicited for the Guardian Angels Ukraine Humanitarian Project. This non-profit project, initiated by the League of Ukrainian Canadian Women under the auspices of the International Council in Support of Ukraine, provides urgent medical services and rehabilitation for veterans and civilians, injured as a result of Russian military aggression against Ukraine. Details about the life-changing project can be found at www.guardianangelsukraine.com.