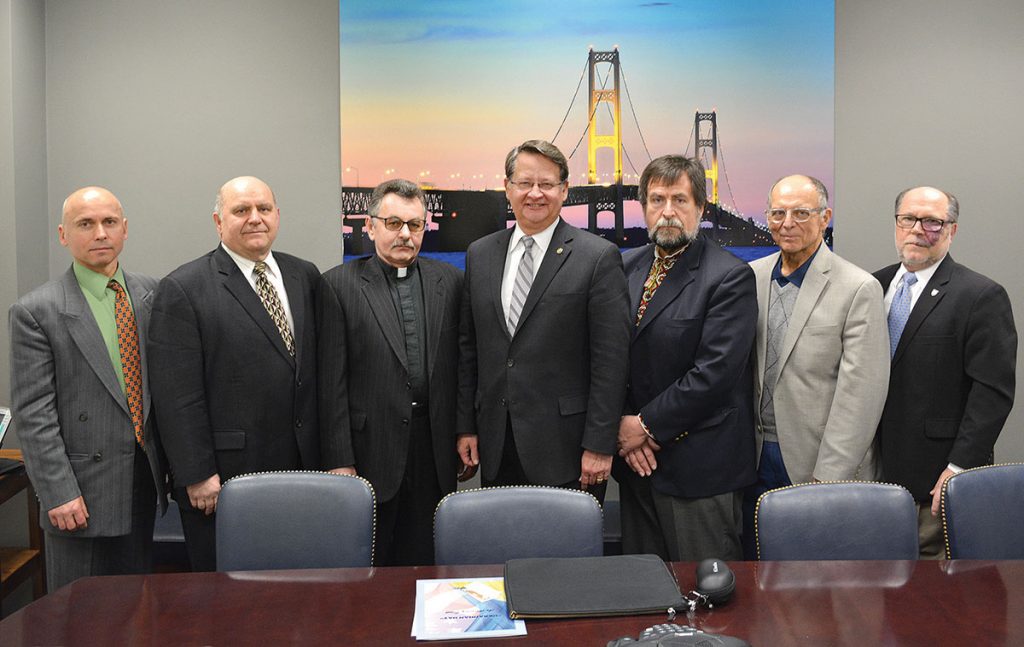 WARREN, Mich. – Ukrainian Americans of Michigan sent a strong delegation to Washington on March 8-9 to participate in the first of several Ukrainian Days planned for 2017. A long-standing national initiative of the Ukrainian Congress Committee of America (UCCA) and Ukrainian National Information Service (UNIS), such advocacy events provide for Ukrainian communities to collectively converge on Washington to simultaneously conduct meetings with their members of Congress and to hold a number of joint events.

The six-member delegation from Michigan was organized by the president of the UCCA’s Michigan chapter, Vasyl Perets, and Membership Committee Chair Michael Andriashko. The trip was sponsored by a generous donation from the Ukrainian Future Credit Union (Vera Kuzyj, president, and Andrew Jakymowych, CEO).

The delegation targeted both Michigan senators, Gary Peters and Debbie Stabenow, and three representatives, Sander Levin, Debbie Dingell and Dan Kildee – all Democrats. Sen. Peters is a member of the Senate Ukraine Caucus, and Reps. Levin, Dingell and Kildee are members of the Congressional Ukrainian Caucus in the House, with Rep. Levin serving as CUC co-chair since its inception in 1997.

Delegation members were direct and forthright in sharing their hopes and fears for Ukraine. Father Valeriy Kandyuk, pastor of St. John the Baptist Ukrainian Catholic Church, noted that his parish was the first Ukrainian church in Michigan, established 110 years ago. “Having a priest that is a new immigrant directly from Ukraine serve as pastor to the oldest Ukrainian church in Michigan with many parishioners going back five generations, underscores the unity of Ukrainians throughout the world,” he said.

Similarly, Mykhaylo Dyachun, also a new immigrant, noted how inspiring it is for himself and other Ukrainian immigrants to be a part of a community that has so many members who were born in Michigan but who care so deeply about their ancestral homeland.

Yaroslav and Michael Andriashko noted that their father helped build the Mackinac Bridge, at the time the longest suspension bridge in the world, linking Michigan’s lower and upper peninsulas. “Our dad and his whole generation of World War II political refugees that fled to America from Soviet Russian tyranny taught us to love America and to never forget Ukraine. Today, it is time for our fellow Americans to understand that Ukraine is as important to the U.S. as the U.S. is important to Ukraine.”

Roman Zubar and Borys Potapenko, both native Michiganians, stressed the importance of continued bipartisan support for Ukraine in Congress. “The critical role of the Congressional Ukrainian Caucus and the Senate Ukraine Caucus in maintaining the unprecedented unity of Republicans and Democrats on Ukraine cannot be overemphasized,” Mr. Zubar said.

Sen. Peters and Reps. Levin, Dingell and Kildee made clear their commitment to support all of the legislation currently before Congress, including strong support for providing lethal weapons to Ukraine. Sen. Stabenow’s senior advisers said that the senator will give very serious consideration to relevant bills before the Senate, as well as joining the Senate Ukraine Caucus, noting “Sen. Stabenow is a strong supporter of Ukraine and the Ukrainian community in Michigan.”

Members of the Michigan delegation also met with Herman Pirchner and Ilan Berman, president and vice-president, respectively, of the American Foreign Policy Council.

Just as the delegation started its long road-trip home to Michigan, Rep. Sander Levin called to say that as ranking member of the all-important Ways and Means Committee, he was in meetings dealing with healthcare reform that went all night until 4:30 a.m. that were then followed by a closed-door intelligence briefing. He called to continue the discussion from the day before concerning the highly charged political environment inside the beltway involving the Trump administration, Russia, Ukraine and the uncertainties that continue to fuel controversy.

The CUC co-chair wanted to reiterate that he and his colleagues in the caucus from both sides of the aisle will continue to press ahead on the U.S.-Ukraine strategic partnership, including all facets of cooperation and assistance. The delegation responded that Ukrainians in Michigan and throughout America and the diaspora as a whole deeply appreciate that Mr. Levin is our congressman, a great and trusted friend, and the most authoritative voice in Congress on U.S.-Ukraine relations.

Cooperation among communities is vitally important. In this regard, the UCCA’s Michigan chapter and the UCCA Illinois Division coordinate many local advocacy initiatives, programs and projects. Mr. Potapenko from the UCCA Michigan serves on the external affairs committees of both local branches of the UCCA, as do Marta Farion and Pavlo Bandriwsky of the UCCA Illinois. Ms. Farion and Mr. Potapenko recently became members of the External Affairs Committee of the UCCA National Executive.

Illinois Ukrainians are in a special relationship with their delegation to Congress, obviating the need to make frequent visits to Washington or to send large delegations. Their senators and representatives often visit the Ukrainian community, regularly attend community events and frequently meet with community leaders at the Ukrainian Cultural Center in Chicago. The UCCA Illinois in recent weeks hosted at community events and/or held face-to-face consultations with Sen. Dick Durbin and (until January 22) Sen. Mark Kirk, as well as Reps. Mike Quigley, Peter Roskam, Danny Davis, Jan Schakowsky and Bobby Rush.