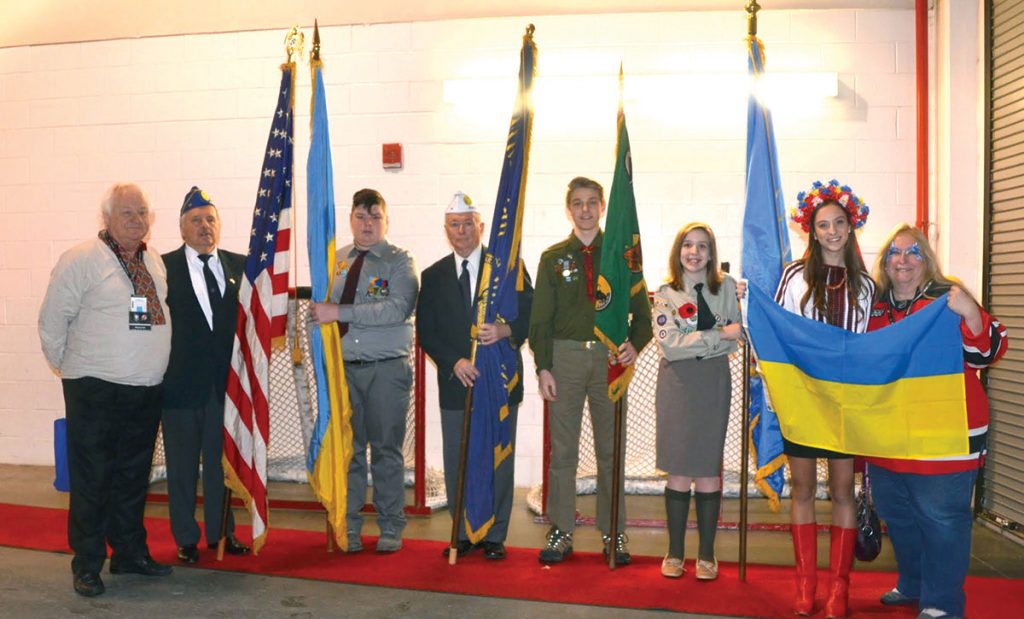 NEWARK, N.J. – Hundreds of Ukrainians attended the fourth annual Ukrainian Heritage Day during an NHL match between the New Jersey Devils and the Columbus Blue Jackets at the Prudential Center on March 19. More than 18,000 people were in attendance.

Prior to the match, as well as during the period intermissions, as part of the afternoon’s entertainment on the concourse level, Ukrainian dance groups performed various dances from multiple regions of Ukraine. Many passersby were curious and stopped with camera phones out to shoot some video or pictures, while others clapped to the music and dancing.

Andrij Cybyk, who is artistic director of the Iskra Ukrainian Dance Ensemble and Academy in Whippany, N.J., served as master of ceremonies and a cultural ambassador for those unfamiliar with Ukraine. He introduced the stage performances by: the Trembita Dance Group of Yonkers, N.Y., under the direction of Orlando and Larisa Pagan; Syzokryli Ukrainian Dance Ensemble of New York; Voloshky School of Philadelphia; and Reechka dance group of Assumption Ukrainian Catholic School in Perth Amboy, N.J., under the direction of Alex Kopczyk and Anna Lawrence.

Dances included Ukrainian favorites, such as “Kozachok,” “Halychanka,” “Arkan,” “Bukovyna,” and of course, “Hopak.” And the performers were all smiles as they proudly showcased Ukrainian culture through dance.

Athena Zhe, a Ukrainian American professional make-up artist, provided face painting for people of all ages. Judging from the long lines, it was a major success.

The three younger flag-bearers (Soltys, Pencak and Krysyna) had the opportunity to ride the Zamboni prior to and during the intermissions, with each rider draped in a Ukrainian flag and waving to the crowd.

During the second period, the stadium rose to its feet as U.S. Army Lt. Col. (ret.) Michael Hrycak, who is N.J. state commander of the Ukrainian American Veterans, was recognized as  “Hero of the Game.” Mr. Bytz and his wife, Chris, and N.J. Devils personnel presented Mr. Hrycak with a plaque recognizing his service to the U.S., and Mr. Bytz invited people to visit the Ukrainian Sports Museum and Hall of Fame in Whippany. Mr. Hrycak was also presented an official N.J. Devils jersey with his last name emblazoned on the back.  Mr. Hrycak is a decorated combat veteran who served in Iraq (Operation Iraqi Freedom).

The match, itself, was a dreadful 1-4 loss for the Devils that clinched a playoff spot for the Blue Jackets. Suffering goals on two penalty shots (the third time that had ever happened in NHL history [1982, 2009]) early on, the Devils’ Adam Henrique answered late to end the first period 1-2. The Blue Jackets notched another goal in the second period, and a final goal in the third.

The Ukrainian National Association had set up an area to inform guests about the organization, distributing booklets, the latest copies of The Ukrainian Weekly and Svoboda newspapers, as well as Ukrainian flags.

Organizers have agreed to the request by the N.J. Devils for a fifth Ukrainian Heritage Day. A date will be announced in the future.