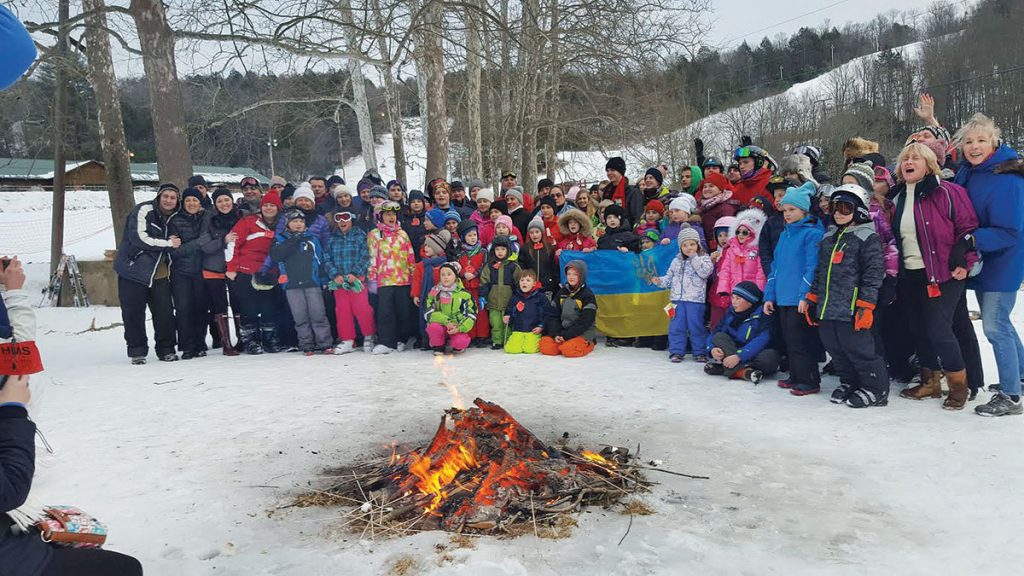 Every year, more and more scouts attend what has become a tradition for younger scouts. Sixty-five cub scouts and scouts, who along with their families totaled over 100 participants, took advantage of gorgeous weather and group discounts to enjoy skiing as beginners or novices on the trails of the beginner-friendly ski mountain. Many older scouts first learned how to ski during previous trips and now return to enjoy their progress. Snow tubing was also available for everyone.

The ski trails and tubing tracks were generously covered with freshly fallen snow, allowing for a full day of snow sports. The day started with official Plast opening ceremonies. The younger scouts fulfilled the requirements for merit badges in wintertime activities and skiing. After lunch, the organizers presented a talk about the history of skiing and ski safety.

In keeping with Plast tradition, the day concluded with a large bonfire built by the Holiday Mountain staff for the Plast group. The participants warmed up with songs and filled up with chocolate s’mores. The organizers guided members of the audience in acting out the Ukrainian folk tale “Ripka” (The Turnip) to everyone’s applause. The cub scouts were awarded their merit badges to take home. The bonfire ended with the traditional song “Nich Vzhe Ide” (“Night is Coming”) and an “iskra” (spark) message that passed through the hand-linked chain that united the attendees. The scouts and their families all left very pleased with the day’s outing.