Vigil in Washington remembers heroes of the Heavenly Brigade 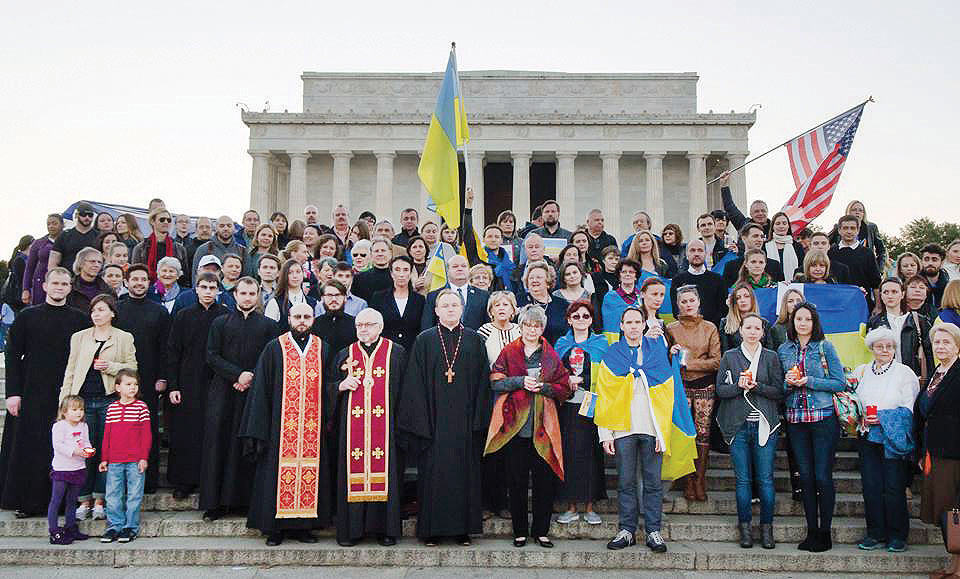 Yuliya Murashko
Participants of the memorial service for the Heavenly Brigade in front of the Lincoln Memorial.

WASHINGTON – United Help Ukraine, in cooperation with the U.S.-Ukraine Foundation, Razom, the Embassy of Ukraine and local Ukrainian churches, organized a memorial vigil in Washington on Sunday afternoon, February 19, to commemorate the third anniversary of the sacrifice by “Nebesna Sotnia” or the “Heavenly Brigade,” who lost their lives during the Euro-Maidan protests.

In February 2014, government forces under the control of then President Viktor Yanukovych shot and killed more than 100 peaceful protesters during what has become known as the Revolution of Dignity.

Approximately 150 members of the Ukrainian community and others in the Washington area gathered in front of the Lincoln Memorial. Among those present were Ukraine’s ambassador to the United States, Valeriy Chaly, who shared memories of his participation in the Euro-Maidan.

Ambassador Chaly stated that Ukrainians must be worthy of the memory of those who gave their lives for a better future for Ukraine. He stressed that the struggle for Ukraine continues, now against Russia’s aggression. Ambassador Chaly thanked everybody for their unity and solidarity with Ukraine.

Nadia McConnell, president of the U.S.-Ukraine Foundation, noted that February 19 this year fell during President’s Day weekend in the United States and this vigil was being held in front of the Lincoln Memorial. She quoted from President Abraham Lincoln’s Gettysburg Address, that those soldiers at Gettysburg “…gave their lives that that nation might live… The world will little note, nor long remember what we say here, but it can never forget what they did here. It is for us the living, rather, to be dedicated here to the unfinished work which they who fought here have thus far so nobly advanced. It is rather for us to be here dedicated to the great task remaining before us – that from these honored dead we take increased devotion to that cause for which they gave the last full measure of devotion – that we here highly resolve that these dead shall not have died in vain.”

Anna Kovalenko, leader of the 39th Euro-Maidan Self-Defense Brigade (Sotnia) spoke also and remembered her friends who had been killed during the Euro-Maidan and those who were killed in the war defending Ukraine from the Russian invasion. She noted that it was unimaginable that, in our time, in the center of Europe, civilian people including women, the elderly and students, were killed by policemen during a peaceful protest.

She also noted that those responsible for the deaths on the Maidan still have not been brought to justice. Pointing out that the war will soon enter its fourth year, she said it was unthinkable that the Russian leaders who must be held accountable for the deaths of tens of thousands of Ukrainians were still travelling to world conferences and were even considered to be members of some coalitions.

Anastasiia Rybytska of Razom also referenced the war entering its fourth year. She said that everyone has a personal reason to help sustain Ukraine’s defense and provide assistance to those affected by the war, and that all who are doing so need to stand together to maximize support for Ukraine.

Ruslan Zamaray of United Help Ukraine also spoke about the reasons that those present had for attending and for continuing to support Ukraine’s defense. United Help Ukraine is a Maidan-born organization that sprang up as a result of the sacrifice the Ukrainian people have made to fight for their independence, freedom from tyranny and for their European future.

Attendees brought candles that they lit, Ukrainian and American flags, and photographs of Ukraine’s new heroes. Additional candles supplied by the Ukrainian Embassy were arranged in the shape of a tryzub around which vigil participants stood in mourning.

United Help Ukraine is a charitable non-profit 501(c)(3) organization that is 100 percent volunteer-based. It helps those at the frontlines protecting Ukraine from the Russian invasion, helping the families of wounded and fallen heroes, and people who have been forced to leave their homes and are in need of temporary assistance. The group focuses on fund-raising and raising awareness of the crisis in Ukraine by engaging individuals, organizations, private and government institutions, and media in the United States.

The U.S.-Ukraine Foundation is a Washington-based 501(c)(3) nonprofit, nongovernmental organization established in 1991 to support democracy, a free market and human rights for Ukraine.

Razom (“Together” in Ukrainian) is a Ukrainian American 501(c)(3) non-profit organization supporting the people of Ukraine in their pursuit of a democratic society with dignity, justice, and human and civil rights for all.