A celebration of Ukrainian women’s voices at the United Nations 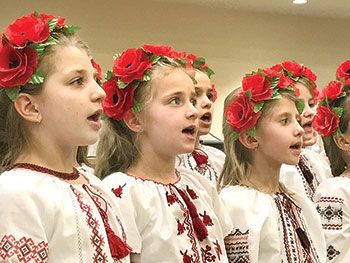 UNITED NATIONS – The Permanent Mission of Ukraine to the United Nations, along with two U.N.-accredited NGO partners, the World Federation of Ukrainian Women’s Organizations (WFUWO) and the Ukrainian World Congress (UWC), organized “A Celebration of Women’s Voices” in honor of International Mother Language Day on March 10 at the U. N. Headquarters in New York City.

International Mother Language Day was proclaimed by the General Conference of UNESCO in November 1999 “to promote the preservation and protection of all languages used by peoples of the world,” and active commemorations began in 2007. This year, on the eve of the 61st Session of the U.N. Commission on the Status of Women, the Ukrainian celebration of International Mother Language Day honored the legacy of women’s voices in Ukrainian arts and literature.

Following greetings by Ambassador Volodymyr Yelchenko, Undersecretary-General Catherine Pollard in her remarks underscored the importance of women and their communities to the United Nations’ mission. Dr. Martha Bohachevsky Chomiak, an authority on the history of the Ukrainian women’s movement and author of “Feminists Despite Themselves: Women in Ukrainian Community Life 1884-1939,” delivered the event’s keynote address.

Dr. Chomiak spoke about the evolution of human communication from basic elements into the sophisticated systems we recognize as modern languages capable of expressing the highest of concepts. She noted the universal recognition of the concept of “mother language” as the language acquired first in the family and then in the community that provides one with a group identity. Language alone, more than any other characteristic, is a group identifier – a fact well understood by those who, over the years, had hoped to destroy the Ukrainian language, she noted.

The program also included a gripping clip from the forthcoming feature-length drama “Julia Blue,” written and directed by Roxy Toporowych. Ms. Toporowych and film producer Nilou Safinya were on hand to speak about the film project. Shot entirely on location in Ukraine, the film is a love story about a bright, idealistic and determined young woman from the western region of Ukraine, a student activist and participant in the Revolution of Dignity, and a wounded soldier returning from the war in the Donbas in Ukraine’s eastern region. The film, due to be released in 2017, recently earned its director the Calvin Klein Spotlight on Women Filmmakers grant at the 2016 Gotham Film Awards.

Additional elements of the program included the poetry of Lesia Ukrainka (1871-1913), recited in Ukrainian by Nadia Tatchin and Lesya Topolya, as well as the work of Ayshe Ake and Sabriye Erejepova, read in the Crimean Tatar language by Zulfire Asanova and Lillia Memetova. A musical accompaniment to the readings, as well as a short performance, was provided by violinists Iryna Kit and Anastasia Antoniw, members of New York Virtuoso Orchestra.

Halyna Bodnar and Julia Stupen offered an excellent performance on Ukraine’s national instrument, the bandura. The program closed with a truly masterful performance by the young members of the all-girls Soloveiky Chorus of Philadelphia.

Co-sponsors of the event were the Self-Reliance New York Federal Credit Union, the Ukrainian Congress Committee of America, the Ukrainian National Women’s League of America and the Volya Institute for Contemporary Law and Society.