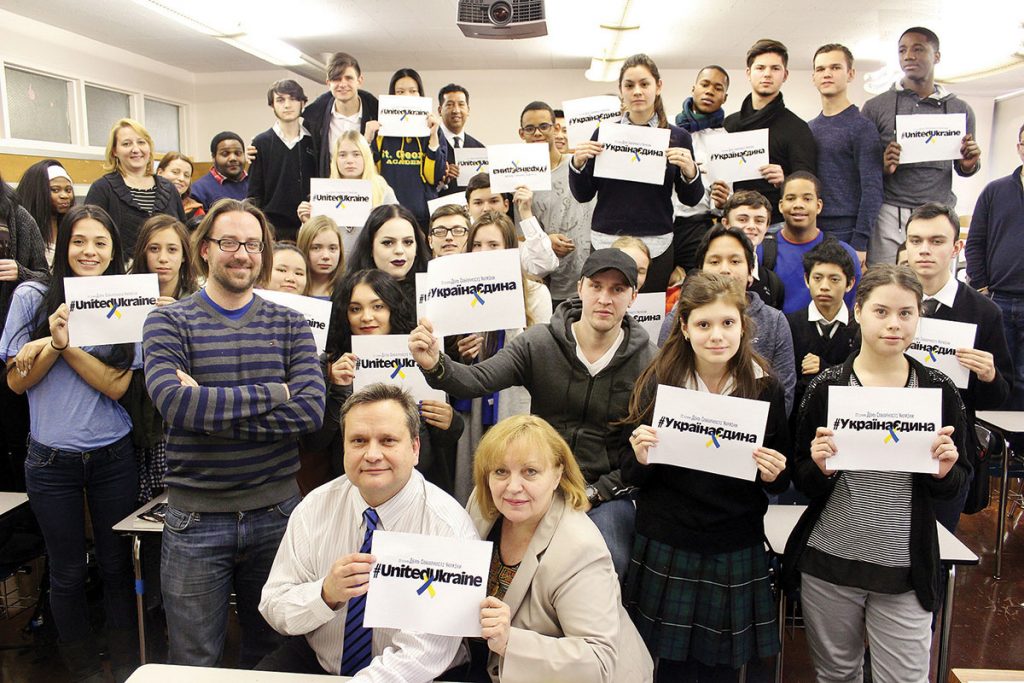 NEW YORK – “This is not the SGA that I remember” seems to be the popular phrase lately for alumni who periodically pop in to their alma mater at 215 E. Sixth St. to visit with former teachers and reconnect with fond memories of their bygone teenage years.

In fact, the many visitors who, in the last 18 months, have stepped through the large glass doors of St. George Academy (SGA) in New York City’s East Village have been pleasantly surprised by the changes to the school, not only in its appearance, but in its atmosphere.

“I’ve noticed the school is more vibrant,” said alumna Klara Kurti, “and there is more student involvement that wasn’t present in previous years.”

The vibe of the school has indeed changed, thanks to its spirited and energetic new principal, Andrij Stasiw, an active member of the Ukrainian American community and resident of the East Village. Since he became SGA’s principal in September of 2015, he has launched the school into a renaissance the likes of which it has never seen before.

Mr. Stasiw began to make changes almost from day one. He revamped the classrooms by installing state-of-the-art Smartboards and new desks in every room. He then installed a high-tech security camera system throughout the school. The halls were brightened with a coat of paint in the new SGA colors, red and green (another change initiated by the new principal), and a modern logo was introduced as well.

As part of their journalism class, the SGA senior class now publishes a newspaper, The SGA Harbinger, which comes out on a quarterly basis, while the administration publishes a quarterly bulletin that is distributed to the parishioners of St. George Ukrainian Catholic Church, as well as members of the Ukrainian American community.

In the past 18 months, the students have had numerous opportunities to meet with renowned guests from outside the school community.

Most recently, the student body met with Maryna Poroshenko, the first lady of Ukraine, and Mamuka Mamulashvili, leader of the Georgian National Legion, which has been fighting beside Ukrainian soldiers in eastern Ukraine since the onset of the Russia’s war in Ukraine.

“There is always an opportunity here for students to learn something new – not just in their regular day-to-day courses, but about current events both here and abroad,” commented Dr. Kim Halverson, SGA’s math teacher.

SGA teachers have thrown their support eagerly behind their new leader. They are a dedicated group of professionals who are committed to providing a safe and caring environment, while offering the highest quality of education for their students. Most of the teachers have years of experience, as well as doctorates or master’s degrees in education from universities such as New York University, Columbia and Pace. Together with Mr. Stasiw, they are enthusiastic about the changes at SGA.

“We want people to understand that we are not the same SGA that they remember. We are a new and improved boutique school which has a lot to offer our Ukrainian and non-Ukrainian students,” Mr. Stasiw explained.

For the past several years SGA has shared its building with La Salle Academy, an all-boys high school which occupies the fourth and fifth floors of the school building. SGA occupies the first three, while the gym and cafeteria are a shared space. Although the two schools share the facilities amiably, SGA is very much its own entity and has often been referred to by La Salle students as “the unicorn school,” a phrase that has come to mean the ideal school where students and teachers are always happy.

Although the student body at SGA represents a healthy mix of cultures, SGA remains a school with a unique Ukrainian flavor. In fact, it is the only school of its kind in the nation. Specifically, it is fast becoming the ideal school for foreign students, both from Ukraine and other parts of the world. With its strong English as a Second Language (ESL) program, and its excellent teacher-to-student ratio, the school offers a safe and comfortable environment for foreign students who are transitioning from one culture to another.

“It is too easy for foreign students to get lost within the public school system. Our school provides the perfect atmosphere for students from Ukraine, and other parts of the world, to learn English in a safe and caring environment,” said Principal Stasiw.

In the past decade, SGA has been a haven not only for students from Ukraine, but also Poland, Georgia, China, Togo and Mali to name a few. Since Mr. Stasiw became principal, full and partial scholarships are available to Ukrainian and Ukrainian American students.

Principal Stasiw, together with his staff and faculty, has great plans and further improvements in store for St. George Academy in the near future.