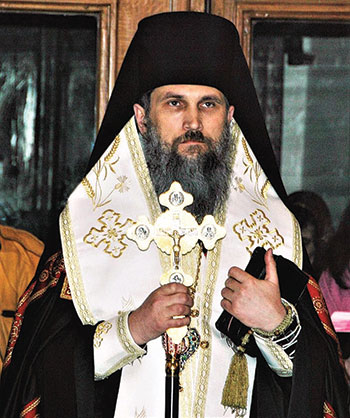 PHILADELPHIA – Archbishop Stefan Soroka, metropolitan of Ukrainian Catholics in the United States, on April 20 announced the appointment of Bishop Venedykt (Valery) Aleksiychuk, M.S.U., as the bishop of the Ukrainian Catholic Eparchy of St. Nicholas in Chicago.

Bishop Aleksiychuk has up until now served as auxiliary bishop of Lviv. He will be the fifth bishop of St. Nicholas Eparchy, succeeding Bishop Richard Seminack, an American-born bishop who served the St. Nicholas Eparchy for 13 years until his death on August 16, 2016, as a result of illness. The St. Nicholas Ukrainian Catholic Eparchy includes most of the central and western United States, as well as Hawaii and Alaska.

Bishop Aleksiychuk was born in Ukraine on January 16, 1968, and is a Ukrainian Studite monk. He was ordained a priest 25 years ago in Lviv and as a bishop on September 5, 2010. He will be installed as the eparch of St. Nicholas in the coming months.

“Let us ask offer prayers of thanksgiving to Almighty God for the blessing of a new chief shepherd for the St. Nicholas Eparchy. Let us offer prayers for Bishop Venedykt as he joyfully undertakes this new journey, under the protection and guidance of the Mother of God,” Archbishop-Metropolitan Soroka said in his official statement.