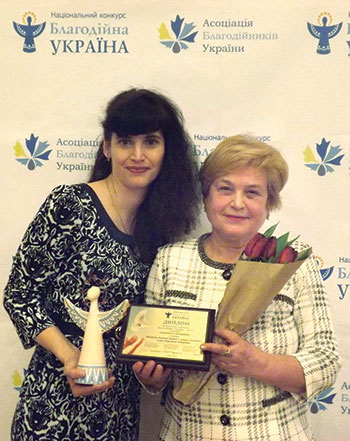 NEW YORK – The Ukrainian National Women’s League of America (UNWLA) was honored on March 29 by the Association of Charities of Ukraine with its top award in the category Aid from Abroad.

The annual awards recognizing groups and individuals active in charitable endeavors have been held since 2012, although the Charitable Ukraine competition was founded in 2007.

This year’s Charitable Ukraine competition had a record number of applicants – 744. It was divided into 15 main, three individual and four special categories, one of which was Aid from Abroad. The statuette presented to honorees is an angel decorated with folk designs and amber called the Angel of Goodness.

The goal of the annual competition is to spur development of charitable activities in Ukraine by popularizing charitable work, patronage of such activity and volunteerism, as well as by informing the public of such good works and their results.

The UNWLA was presented its award by Ukraine’s Vice Prime Minister for European and Euro-Atlantic integration Ivanna Klympush Tsintsadze in a ceremony held at the Kyiv City Administration. Also vying for the top award in the Aid from Abroad category were organizations from Poland and Turkey.

Representing the UNWLA at the ceremony were Dr. Maria Furtak, UNWLA representative for social welfare in Ukraine, and Olena Vlasenko, president of the Zhytomyr branch of the Ukrainian Women’s League of Ukraine.

UNWLA President Marianna Zajac commented: “This recognition is a great honor for us, confirming that the longstanding ideals, goals, faith and work done by our organization and previous generations of the Ukrainian diaspora did not go unrecognized.”

Many special guests were present at the awards ceremony, including representatives of five religious denominations active in Ukraine; First Lady of Ukraine Maryna Poroshenko; the chairman of the Supervisory Board of Ukraine 3000 Foundation Kateryna Yushchenko; Minister of Culture Yevhen Nyschuk; Minister of Education and Science Liliia Hrynevych; poet and publisher Ivan Malkovych; the leader of the band Mandry, Serhiy Fomenko; and other public figures.

A summary of the UNWLA’s humanitarian aid and cultural work for the year 2016 was listed on the reporting form for the Charitable Ukraine competition. Among the information provided was the following.

• In January of 2016 two camps sponsored by the UNWLA were held in Yaremche and in Lviv for families of soldiers serving in the anti-terrorist operation (ATO).

• In cooperation with Dr. Ulana Suprun (the organizer of Patriot Defense and now Ukraine’s acting minister of health), the UNWLA financially supported training courses held in public hospitals related to the assessment and treatment of traumatic injuries.

• The UNWLA became the major donor to the trauma therapy Center of Hope at the Institute of Psychiatric Health at the Ukrainian Catholic University in Lviv.

• Representatives of the UNWLA board visited injured soldiers in hospitals in Kyiv, Dnipro, Zhytomyr, Lviv and Zaporizhiaa and gave them financial aid directly.

• The UNWLA, under the auspices of Children of the Sun in Zhytomyr, gave financial aid for the care of children with Down syndrome.

• The UNWLA became the sponsor of the summer camp “Don’t Be Afraid! Be Free” for children from the ATO zone.

• The UNWLA donated a robot-simulator, “Taras M,” for the medical educational training of the 80th Brigade.

• Six physicians and two nurses from Shriners Hospital in Boston, organized by Dr. Gennadiy Fuzaylov from Massachusetts General Hospital, travelled to Lviv to examine 140 pediatric burn victims from all over Ukraine. They operated on 37 of these children. The medical treatment was free of charge. This mission took place with the financial support of the UNWLA.

• The UNWLA financed the purchase of 240 beds and mattresses for the Ivan Bohun military high school in Boyarka (Kyiv region).

• The UNWLA continues its long-established humanitarian projects, among them: aid to orphanages and orphaned children in Ukraine, and aid to aged, needy individuals and families who cannot afford necessary medical care.

• Under its “Adopt a Family of a Fallen Hero” project, the UNWLA sends quarterly financial assistance to 12 families.

• Humanitarian aid as part of the program “Aid to Victims of the Ukrainian War of Dignity” continues.

The above-mentioned humanitarian and cultural projects benefit all of Ukraine. In order to raise funds for these projects, to inform the American public about Ukraine’s history and present-day issues, and to share Ukrainian culture, members of UNWLA branches throughout the United States hold a variety of programs, including literary evenings, auctions and holiday bazaars.

The UNWLA comprises 70 branches, all of which carry out their work on a volunteer basis. Many Ukrainian and American institutions in the United States partner with the UNWLA by generously donating goods, services or finances. In addition, on the initiative of UNWLA members, students in Ukrainian schools аnd other children have written letters to Ukrainian soldiers serving in the ATO, sending their prayers and love to these defenders of Ukraine.

The story above was prepared on the basis of information submitted by Sofia Soroka and Ulana Zinych on behalf of the UNWLA.