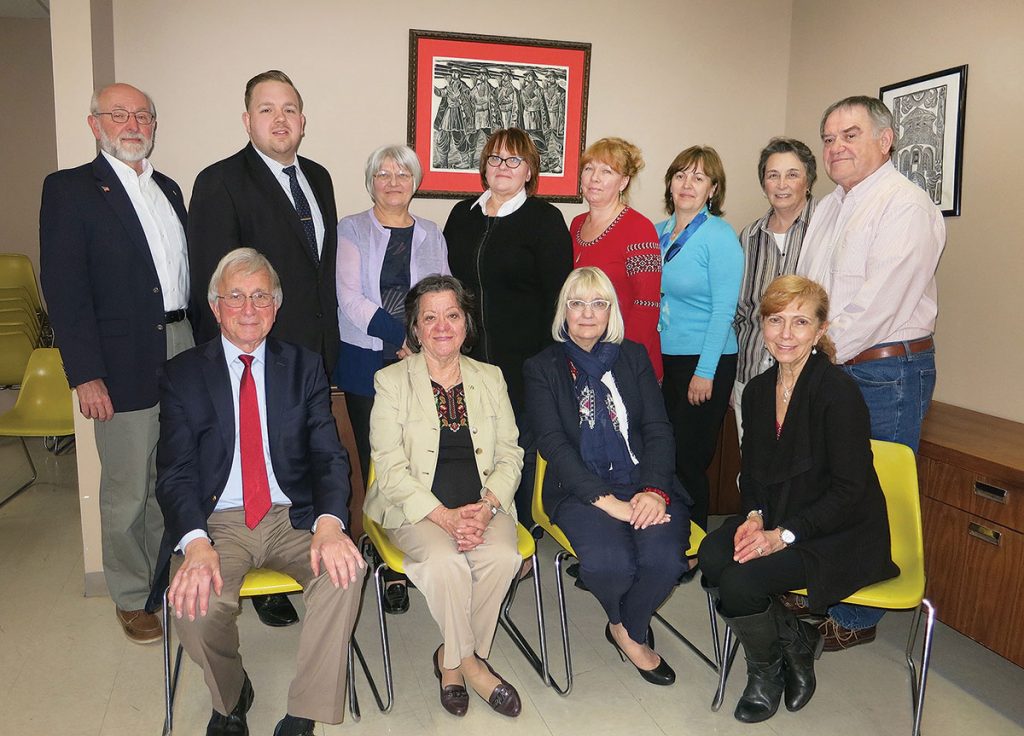 District Chairman Oksana Stanko opened the proceedings by welcoming all to the meeting. Meeting participants voted a presidium consisting of Yuriy Symczyk as chairman and George Stanko as secretary.

The UNA Executive Committee was represented by President Stefan Kaczaraj, National Secretary Symczyk and Treasurer Roma Lisovich. Also present was Luba Walchuk, a UNA advisor and secretary of UNA Branch 362, which is based in neighboring Pennsylvania.

After the meeting’s agenda and the minutes of the previous annual meeting were accepted, Ms. Stanko delivered a report on the district’s activity, citing its members’ presence at area festivals, where they manned UNA information tables. She also noted that district members participated in the Ukrainian Heritage Day at the New Jersey Devils hockey game on March 19.

Also noted were the Petrykivka workshop held under UNA sponsorship at the Ukrainian American Cultural Center of New Jersey in Whippany and the “World of Garlic” presentation at St. Nicholas Ukrainian Catholic Parish in Passaic.

Ms. Stanko spoke about the district’s organizing activity, reporting that 29 new policies were sold for a total face value of over $915,000 and congratulating Valia Kaploun for selling eight of those policies and thereby becoming the district’s top organizer.

Michael Bohdan, the district’s organizing director, then offered his brief report and comments, informing his colleagues that he was working to establish contacts with parishes in New Jersey and to get other UNA’ers involved in representing the organization at various local events.

The financial report was delivered by the district treasurer, Walter Honcharyk.

Reporting for the district’s Auditing Committee, Ms. Kaploun noted that all books are in order. The officers’ reports were unanimously accepted by the meeting participants.

UNA President Kaczaraj spoke briefly about the UNA’s financial status, noting that it continues to improve, as evidenced by the growth of the surplus over the past four years and the fact that last year alone it grew by nearly $1 million. However, he added, the UNA has to increase sales of its products.

UNA Treasurer Lisovich provided some more details about the financial status, noting that all indicators point to the UNA attaining $10 million in surplus by the end of this year. She reported a fourth consecutive year of net profits, which last year were $1.2 million; a 41 percent increase in total premium income; and a 2 percent decrease in total liabilities as the UNA continues its expense-management initiatives. Ms. Lisovich added that the UNA benefits from a strong investment portfolio.

UNA National Secretary Symczyk spoke about organizing matters., reporting that the New Jersey District succeeded in brining in annual premiums of $40,638. During 2016 the UNA over all sold 125 life insurance policies for a total face value of $4.5 million (and annual premiums of over $122,000) and 56 annuities for approximately $2.3 million. In addition, Mr. Symczyk spoke about the UNA’s Facebook page, now being regularly updated with posts by Christine Syzonenko, which has resulted in more likes for the page as well as for individual posts – all of which raises the UNA’s visibility.

During a discussion that followed the reports, branch representatives exchanged ideas on how to improve organizing efforts, promote the UNA and make it more visible in the Ukrainian community.