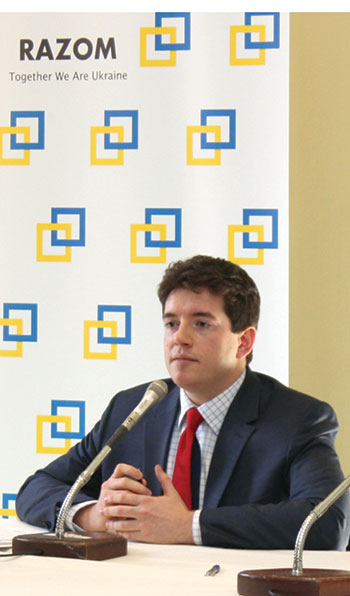 Alex Horbachov
Mykola Murskyj, Razom project lead for the report on U.S. policy towards Ukraine, presented the findings and led a discussion on Capitol Hill on February 23.

Razom for Ukraine, a U.S.-based non-profit organization, in collaboration with experts in Ukrainian policy and international affairs, recently issued its report “U.S. Policy on Ukraine: Challenges and Opportunities.” Launched on February 23 in Washington on Capitol Hill, the report is intended as a comprehensive survey for policymakers and their staff; it offers the both an analysis of current policy and concrete recommendations moving forward.

Below, Mykola Murskyj, who managed the production of the report, discusses its goals and key take-aways with Lesya Pishchevskaya.

Mr. Murskyj is a Belfer International and Global Affairs Student Fellow at Harvard University’s John F. Kennedy School of Government, where he is completing his master’s degree in public policy in international affairs. He is a managing editor of the Kennedy School Review.

Ms. Pishchevskaya is a Razom volunteer who was born in Kyiv and moved to the U.S. in 2005. She graduated with honors from Berkeley with an M.S. in business administration and an M.A. in mass communication; and recently graduated from the Columbia Graduate School of Journalism. She is director of account management at 4C, a data-science and technology company pioneering the intersection of social and television advertising.

How did your team come up with the idea of creating this report?

“U.S. Policy on Ukraine: Challenges and Opportunities” is our way of contributing to a larger conversation about U.S. policy on Ukraine. We thought that it would be important for people who can influence American policy towards Ukraine to have more complete and nuanced information about what’s going on there and why it matters to the U.S.

What is the structure of the report?

The first half of the report is a primer, so to speak, on Ukraine. It contains sections reviewing the Maidan in the context of Ukraine’s history, the Russian-led separatist movement in Ukraine’s easternmost regions, as well as U.S. policy toward Ukraine since 2014. The “primer” tries to provide readers with information that might help them parse the labyrinthine coverage of Ukraine in the media, as well as the geopolitical arguments put forward by politicians, academics and activists. This part of the report was written by the production team, which comprises a number of graduate students and young professionals, including Razom board members who helped curate the effort.

The sections of the second part, written by eight experts from the U.S. and Ukraine, take a deeper dive into key policy issues – for example, what the U.S. can do to help Ukraine with anti-corruption reforms. Part II contains sections on everything from Ukraine’s economy to judicial reform.

What is the overarching theme or idea?

The entirety of the report is underpinned by the recognition that Ukraine, its stability and security, and the security of Eastern Europe generally, are key U.S. interests. In the similar way that, for example, stability in the Middle East and maintaining access to energy supplies are national interests, the stability of Eastern Europe is as well. In addition, it’s important for the U.S. to stand up for the rules-based world order, in which sovereignty, self-determination and territorial integrity are the foundation of international relations.

What role does the report play?

“U.S Policy on Ukraine” is meant to be our contribution to a larger conversation. This report does not, for example, say which legislation to support and which not – that’s neither our goal nor our place. Instead, it attempts to dispassionately outline that if the U.S. wants to further its interests in Eastern Europe, including the region’s security and stability, then such and such are the steps that would need to be taken. The report is not intended for lobbying or advocacy; rather, it’s a guide – here are the American interests in the region and here is how to pursue them.

Why is now the right time to release this report?

The political changes happening in Washington and around the world leave much of our domestic and foreign policy canon up for renegotiation. Whether this is good or bad is beside the point – if the U.S. is going to be re-evaluating its role in the world, it’s important that its interests in Eastern Europe be accounted for and that there be continuity in U.S. support for Ukraine’s democratization.

The report makes the following recommendation: “To break the deadlock in the Donbas War’s peace process, the U.S. should push for progress to be made in parallel on the security, political and humanitarian directions.” What do you believe would be the best way to enact this recommendation for the current administration?

First and foremost, there needs to be a sustained ceasefire; the shelling should stop, and civilians, soldiers and people living in the conflict zone should stop dying. After that, progress needs to be made simultaneously on security, politics and humanitarian concerns. For example, electricity and water supplies for Donbas residents must be restored even as banned heavy weapons are being withdrawn.

The current administration can play a key role in encouraging Ukraine, Russia, and the separatists to implement the various obligations that they have both to the people suffering in the Donbas, as well as to the international rules-based order.

The international community should, of course, do all it can in support of a sustainable ceasefire. Once there is a sustainable ceasefire, there are different initiatives that need to take place: the authorities, whoever they may be, must absolutely defend the humanitarian needs of Donbas residents, they need to rebuild schools, they need to restore the water supply, they need to make sure that people feel safe in their own homes and that they have the means to provide for themselves and for their families. People need water, shelter, security and healthcare immediately.

As we see around the world – from the foreign fighters joining ISIS to gang violence in the U.S. – insecurity, persistent unemployment, and a sense of hopelessness are the ingredients of radicalization. This toxic mix makes the young people of the Donbas susceptible to radicalization and thus sustains the ranks of the separatist militias.

The report contains the recommendation, “The United States should encourage the Ukrainian government to focus on top-priority reforms and avoid political infighting.” Should the U.S. allocate more funding to the Ukrainian non-governmental organizations?

It seems that there are two things that should be done here: First, the amount of funding that is given to civil society organizations in Ukraine should be increased, and the set of organizations receiving this funding should be diversified to include those regional NGOs not based in Kyiv. Second, the allocation of funds to the Ukrainian government must continue to be strictly conditioned on specified, concrete progress on reforms.

Which findings in the report do you suspect the readers will find most interesting or surprising?

People in Ukraine are getting frustrated with the slow pace of reforms. As Natalie Jaresko pointed out during a talk at Harvard University last fall, although Kyiv has indeed pushed through very important reforms, many of them are largely structural and not readily visible to the general public. The worry is that Ukrainians, impatient for economic growth and the rebuilding of infrastructure, might soon get frustrated with Ukraine’s Western choice.

To that end, it would be smart for the West to increase the visibility of its aid. If the U.S. were to contribute more visibly to the rebuilding of infrastructure, helping with the healthcare reform, education reform, that would be very important for preserving Ukrainians’ enthusiasm for the Western choice that they made in 2014.

One of the important take-aways of the report is that many reforms are contingent on the success of judiciary reforms. It’s great if we can restructure the hydrocarbon market, say, but if the courts remain ineffective, the reforms will not really be meaningful. How can I preserve my livelihood if I have nothing but corrupt courts in which to defend my property rights? How can Ukraine lock in the reforms it has already passed without a properly functioning judiciary?

You had a formal launch event in Washington on February 23. What’s next for the team that wrote the report?

Yes, we presented the report on Capitol Hill and are now holding follow-up meetings with both staffers and other stakeholders. We’ll be meeting with the Ukrainian Embassy to get more input from them, and we’re also working to update the report online (check out www.razomforukraine.org/policyreport). I’m very grateful to all the volunteers who continue to work on this important project, as well as to the donors who made the report’s production possible.