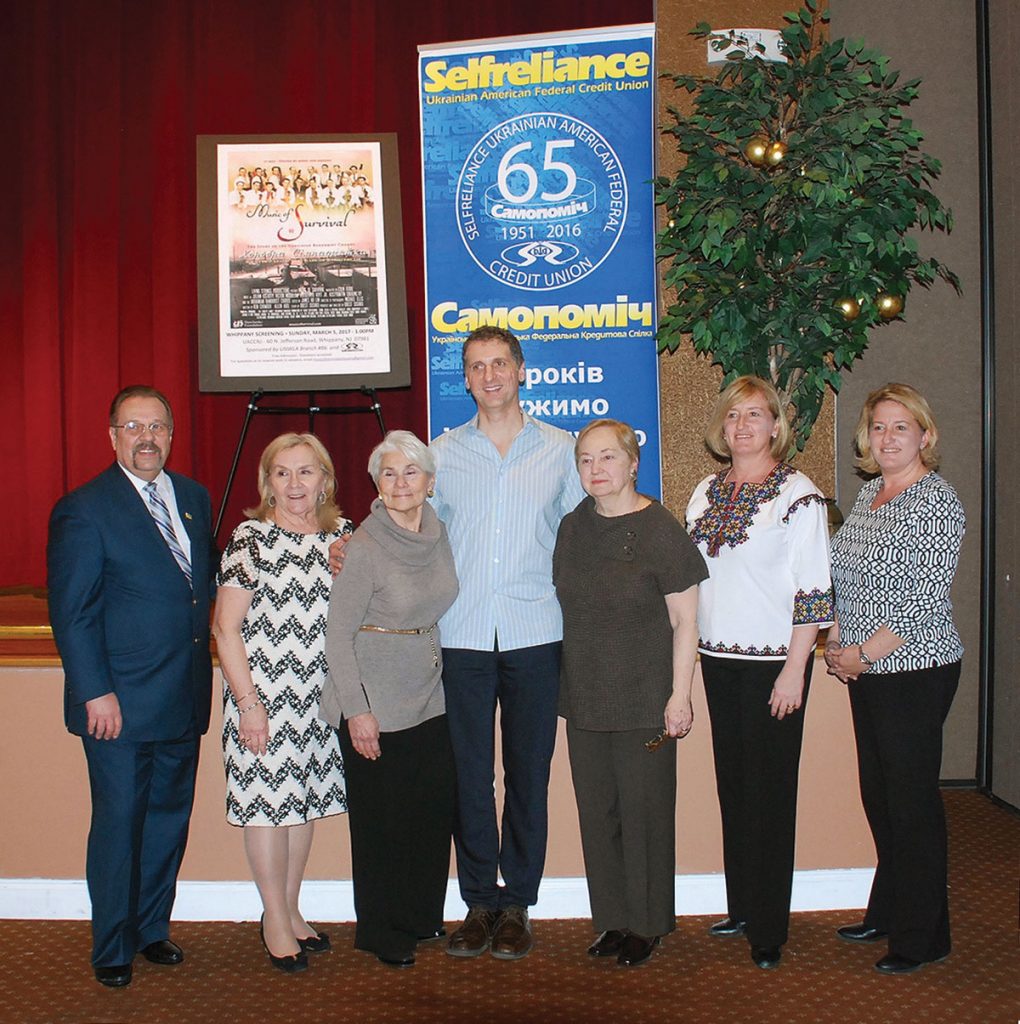 WHIPPANY, N.J. – Sunday, March 5, saw a full house at the screening of “Music of Survival” at the Ukrainian American Cultural Center of New Jersey in Whippany. The film is the triumphant story of the original 17 members of the Ukrainian Bandurist Chorus (UBC) who survived World War II as a musical ensemble. The film examines the roots of the unique musical tradition of the bandura and the harrowing journey of the chorus, and poignantly tells the story of how the musicians were used and abused by political regimes.

The event, free to the public, was sponsored by Ukrainian National Women’s League of America Branch 86 and Selfreliance Ukrainian American Federal Credit Union. The audience of over 100 Ukrainian and non-Ukrainian attendees was visibly moved by the film, giving a rousing standing ovation to the film’s producer, Orest Sushko, who was in attendance from Toronto.

Mr. Sushko, an independent motion picture and film professional with a 30-plus- year career in production, shared during his post screening discussion with the audience that his motivation for making the film was to leverage his professional skills to create a tribute to both the “Brave 17” members of the early chorus and the memory of his father and grandfather, who were his inspiration to create the film.

Mr. Sushko’s father, Makar Sushko, was the first Canadian member of the Ukrainian Bandurist Chorus. Having studied at the Lviv Conservatory, and liturgical chant in Kremenets, Makar Sushko was invited by chorus musical director Hryhory Kytasty to join the ensemble – first in Germany and then, once again on its first cross-Canada tour in 1949-1950.

Orest Sushko’s grandfather Pavlo Stepowy was a blacksmith and master craftsman who began crafting banduras in the 1950s, eventually creating more than 75 instruments in his lifetime. One of his banduras resides in the Museum of History and Civilization in Ottawa, the capital of Canada. Mr. Stepowy became an honorary patron of the Ukrainian Bandurist Chorus through his devotion to the preservation of the noble musical legacy of the bandura

“Music of Survival” had its world premiere in Toronto at TIFF Bell Lightbox, the home of the Toronto International Film Festival in 2014, where it was very well received. Jesse Wente, director of film programs at TIFF Lightbox, wrote: “Music of Survival is a testament to the enduring power of art and the human spirit, even in the face of the greatest of horrors. Its music uplifts, informs and indeed transforms the spirit and the mind, shedding much-needed light on a story of cultural survival that resonates even more deeply today.”

The film has since played across Canada including Montreal; Windsor and Hamilton, Ontario; Winnipeg, Manitoba; Saskatoon and Regina, Saskatchewan; and Edmonton and Calgary, Alberta; and in many U.S. cities, including Cleveland, Detroit, Chicago, New York, Lexington Md., and Stamford, Conn., as well as at several universities including Columbia, Wesleyan and Memorial University, and will be playing at the University of Toronto in March. The film also recently played in Dusseldorf, Germany, and work is under way for the film to screen in Ukraine as well.

As a legacy to educate future generations, Mr. Sushko and the Ukrainian Bandurist Chorus are creating an educational packet, including a DVD copy of the film, to be gifted every year to all graduating students of schools of Ukrainian studies in the United States and Canada. A pilot program involving Ukrainian school screenings combined with this initiative is currently under way.

For more information about the film and how to bring it to your community, go to: http://musicofsurvival.com/ or e-mail musicofsurvival@gmail.com.