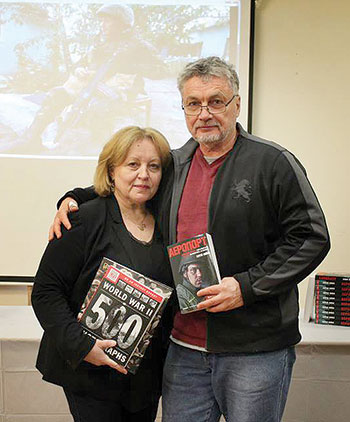 NEW YORK – On Monday, March 13, the United Ukrainian American Organizations of New York, the New York City branch of the Ukrainian Congress Committee of America (UCCA), hosted an evening discussion with Sergei Loiko, renowned journalist, war correspondent and author. Speaking to a packed audience, Mr. Loiko presented his novel “Airport,” a fictionalized account of the four days when he was imbedded with the Ukrainian “Cyborgs” during the 2014 Donetsk Airport siege.

Mr. Loiko, who has been to 25 warzones, began his comments by stating that being in Donetsk was different than any other warzone he had been to because this war “is built on lies” spread by Russian television. Although his book is a fictionalized account, Loiko underscored that it is based on what he witnessed while spending four days with the Cyborgs, and that many of the book’s characters and plot lines were inspired by the people he met and events he personally experienced. In describing his book he noted that he needed a thread that would tie all his vignettes together, and since he himself is a journalist, he used a journalist as the character that connected the various events together.

Accompanying his presentation, Mr. Loiko screened a montage of pictures, with a soundtrack by Svyatoslav Vakarchuk, that he shot during his time at the Donetsk Airport – some of the fiercest fighting between Ukrainian government troops and Russian separatists. Captured through the camera lens, Mr. Loiko’s images communicated not only the horrors of the war but also the heart-wrenching human side of the soldiers in battle.

Mr. Loiko then asked Alexander Cigale, one of the top American translators of poetry, whose work has appeared in many prestigious literary journals and who translated his book from Russian to English, to read an excerpt from the novel “Airport.”

In his closing remarks, Mr. Loiko explained that he wanted to have his book translated into English because that will greatly benefit English-language readers by informing them about the complexities of the ongoing conflict in the heart of Europe. He concluded by stating that, in addition to wanting to create awareness about the Russian-Ukrainian war and the Donetsk airport siege in particular, he wanted to commemorate the heroism of the Ukrainian Cyborgs who defended the airport.

Ukrainian language copies of Mr. Loiko’s novel “Airport” may be purchased at the UCCA National Office. To purchase a copy, send a check or money order made out to “UCCA NYC Branch,” with a note in the Memo stating “Airport,” in the amount of $25 (includes shipping and handling) to: UCCA National Office, 203 Second Ave., New York, NY 10003.