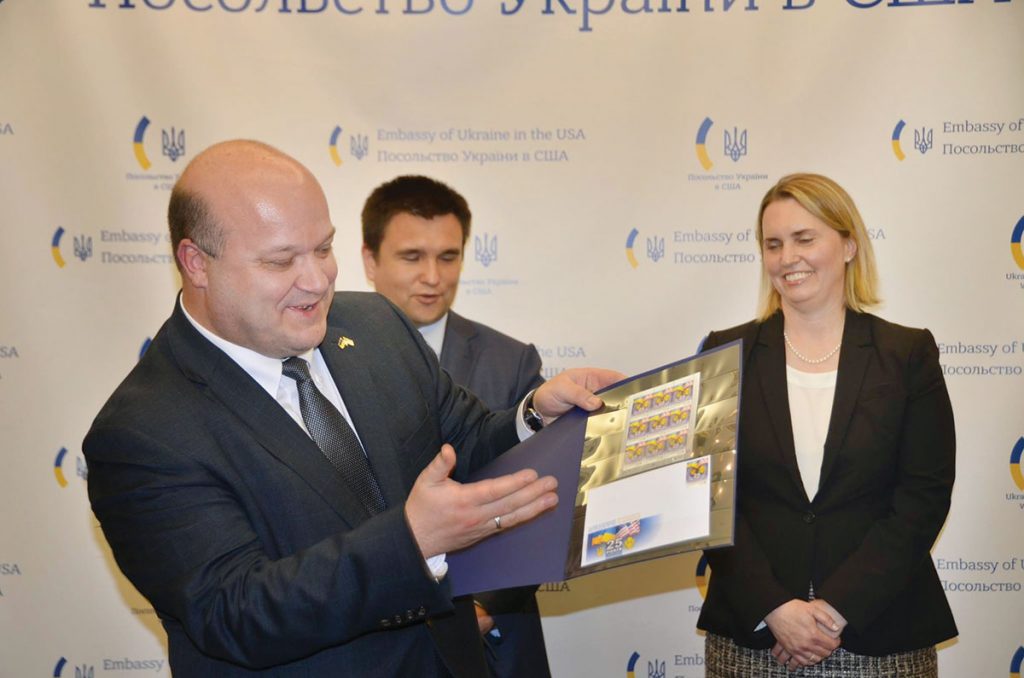 WASHINGTON – While visiting the U.S. capital May 8-10 for meetings with representatives of the Munich Security Conference, Ukraine’s Foreign Affairs Minister Pavlo Klimkin also participated in the celebration of the 25th anniversary of U.S.-Ukraine diplomatic relations at the Embassy of Ukraine on May 8.

During that evening reception, he also presented his country’s Order of Princess Olha to Melanne Verveer, the executive director of the Georgetown University’s Institute for Women, Peace and Security, and witnessed the presentation of the Embassy’s awards to five prominent individuals for their work in assisting Ukraine and positively developing its relations with the United States.  Also on the agenda was the first-day-of-issue signing ceremony of the Ukrainian postage stamp marking the 25th anniversary of U.S.-Ukraine relations.

In his opening remarks before introducing Foreign Affairs Minister Klimkin, Ukraine’s Ambassador to the U.S. Valeriy Chaly expressed his country’s appreciation for the political and economic support Ukraine has been receiving from the United States and the Ukrainian American community.

“I appreciate that today we have the bipartisan support of Congress, the support of the State Department, Pentagon, White House,” he said, pointing out the presence at the event of Deputy Assistant Secretary of State Bridget Brink, who heads the Bureau of European and Eurasian Affairs.

Minister Klimkin recalled how he joined the Ukrainian Foreign Affairs Ministry 24 years ago and visited the newly established U.S. Embassy in Kyiv. “It was a very good feeling of developing cooperation and friendship,” he said. “And if you ask the average Ukrainian in Kyiv today about who is Ukraine’s best friend, the answer will be the United States.”

It has been a history of “ups and downs” in politics, Minister Klimkin added. “But it’s always about values and coming together as friends, as allies.”

He recalled the 1994 Budapest Memorandum, in accordance with which Ukraine gave up its nuclear weapons in return for security assurances, and how Ukraine’s relations with Russia have gone downhill since then – especially in the past few years with Russia’s annexation of Crimea and the continuing conflict in eastern Ukraine.

“And we have to fight it together,” he stressed. “Because at the end of the day it will be our victory, it will be a victory for our freedom. But it will be our common victory, and also a U.S. victory, because it’s about our common understanding how decent people would live decently in this world of freedom.”

“We will definitely celebrate, but not today. It’s important,” he said, “to fight for the future.”

The Ukrainian foreign affairs minister noted that earlier that day, he laid a wreath at the Tomb of the Unknown Soldier at Arlington National Cemetery.

In her brief remarks, Deputy Assistant Secretary Brink noted that this is her 21st year working in diplomacy. Why? Because of the “American commitment to freedom,” she said, no matter whether the U.S. government is controlled by the Democratic or the Republican party.

The Trump administration’s policy and commitment to Ukraine “is very clear,” she stressed. “And it is a commitment to supporting Ukraine’s territorial integrity, its internationally recognized borders.”

“It’s a commitment to supporting the partners who are trying to find peace in eastern Ukraine, supporting the Minsk agreement, and also maintaining sanctions on Russia until those agreements are fully implemented,” Ms. Brink  said.

She noted that Ukraine’s reform efforts are a big part of this commitment. “It’s our judgment that that will guarantee Ukraine’s future.”

Foreign Affairs Minister Klimkin returned to the center of attention once again, this time to present – on behalf of President Pedro Poroshenko – the Order of Princess Olha (II Degree) to Ms. Verveer “for significant personal contributions for the strengthening of international authority  of the Ukrainian state,” its scholars and historical and present day achievements.

He pointed out that Ms. Verveer is a “renowned advocate of gender issues” and how women can achieve power, and is a member of Ukraine’s international advisory council. She is also the first U.S. ambassador for global women’s issues, named to that post by President Barack Obama.

Accepting the award, Ms. Verveer expressed surprise at receiving it, noting that it could well have gone to many of the other persons standing in the Embassy’s reception hall for their work.

As a granddaughter of Ukrainian immigrants, with their values imbued in her, she recalled the privilege of accompanying President Bill Clinton to Ukraine.

“It was one of those moments I shall forever cherish: that this granddaughter of immigrants, who had to come to this country because of economic needs, could go back with the president of the United States two generations later,” she noted.

“Has always been a great gift for me to do whatever I can for the Ukrainian people, and particularly for women in Ukraine, who, I feel, still have not gotten the justifiable recognition that they deserve.”

There were more awards to be presented that evening as Ambassador Chaly recognized five prominent Washington activists for their work in assisting Ukraine and positively developing its relations with the United States:

The evening concluded with the first-day-of-issue signing ceremony of the postage stamp honoring the 25th anniversary of U.S.-Ukraine relations by the managing director of the U.S. Postal Service, Franca Davis, and the general director of UkrPoshta, Ihor Smilyansky.