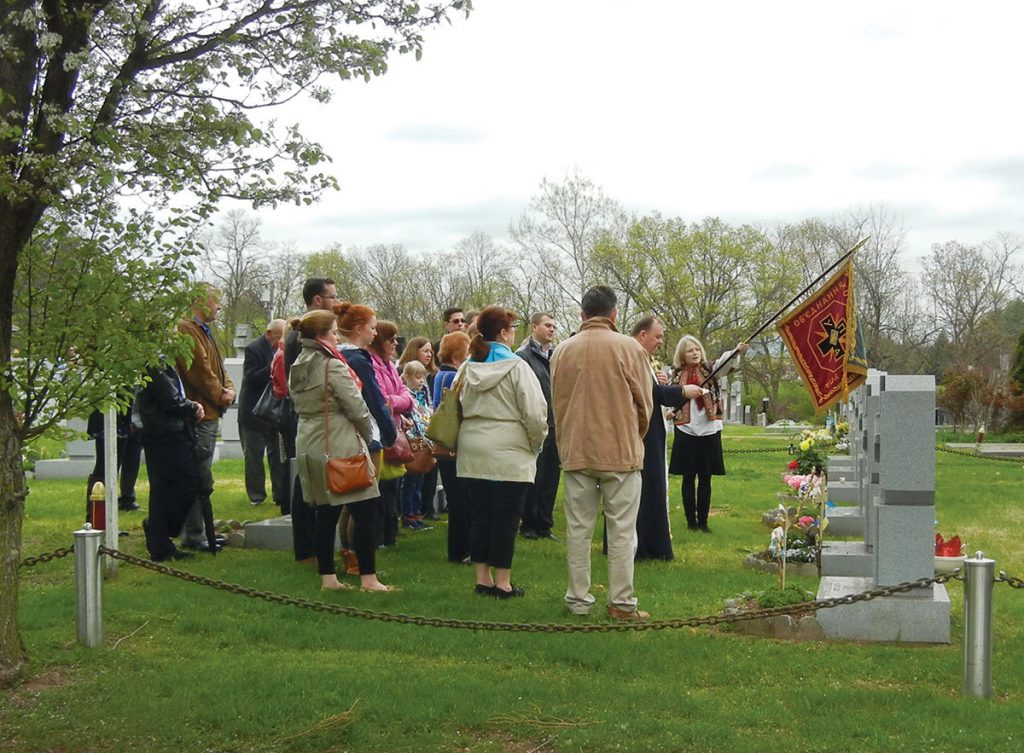 Yuri Turchyn
Family members pay homage to their loved ones in the UPA memorial section of St. Andrew Cemetery.

SOUTH BOUND BROOK, N.J. – St. Thomas Sunday, one week after Easter, annually brings together family members honoring their loved ones at St. Andrew Cemetery in South Bound Brook, N.J. The UPA family also came together that weekend, with the Rev. Andriy Dudkevych reading the names of deceased Ukrainian Insurgent Army members during a panakhyda (memorial service) at the UPA memorial.

The commemoration focused on the sacrifices made by the UPA and the 75th year since its founding; the 70th year since Akcja Wisla, the forced deportation of over 150,000 Ukrainians from their ancestral lands then located in Polish territory; and the 70th year since the Great Raid – the UPA’s final directive in 1947 to save and spread primary source material about the UPA struggle for Ukraine’s independence to the West.

According to Litopys UPA (Chronicle of the Ukrainian Insurgent Army), Volume 53, the UPA raid into Western Europe was the final chapter in the activities of the Ukrainian Insurgent Army in the Czech Republic. During the second half of 1947, several units of Ukrainian insurgents crossed Czechoslovak territory and reached the West. This march was undertaken as a result of a general Communist Polish government offensive against the UPA. Beginning in April 1947, the goal of Akcja Wisla (Operation Vistula), a forced resettlement operation, was the total deportation of the Ukrainian minority population from southeastern Poland (also known as Zakerzonnia), which would result in the ultimate liquidation of the Ukrainian resistance movement in the country.

A recent initiative by Ukrainian community organizations, along with the Society of Veterans of the Ukrainian Insurgent Army Inc. and Former Members of Ukrainian Insurgent Army – UPA, took place to plan a cultural evening of solidarity and a commemoration with a focus on the two aforementioned events for Saturday, October 14, the Day of the Holy Protectress, which is historically identified as the date when the UPA was created.

This is a commemorative year and a national committee has issued an appeal to the Ukrainian diaspora to plan community events. For more information about the academic and cultural events scheduled for October 14, readers may contact Zenia Kowalczyn Brozyna at UPA.Wisla@gmail.com. For matters regarding Litopys UPA (Chronicles of the Ukrainian Insurgent Army-UPA), contact Christina Kotlar,  christinakotlar1@gmail.com.