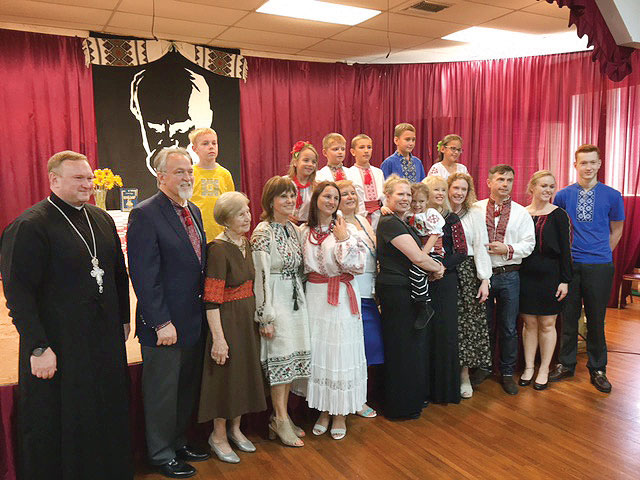 On March 12, a program paid tribute to Taras Shevchenko. Father Andrij Romankiv prefaced the program with a prayer and an introduction expressing eternal memory to the bard of Ukraine.

Oksana Piaseckyj, program organizer, followed with a brief summary of the themes in the afternoon program. The first theme was Shevchenko’s romanticism in his poetic description of the beauty and turbulence of nature. Readings by Maria Pivsetok, Daryna and Matvijko Karachun, and Anya Wenglowsky highlighted Shevchenko’s sensitivity. The choir of the Assumption Church, under the direction of Donna Maksymowich-Waskiewicz underscored the drama of nature with its rendition of “Reve ta Stohne” (The Mighty Dnipro).

The second theme, Shevchenko’s love for Ukraine and his pleas to awaken his people, was captured in readings given by Paul Galadza and Alex Veshtebej. The church choir continued with the song “Dumy Moyi.”

Several children from the parish drew pictures that corresponded to Shevchenko’s poetry, displayed them and then recited poems. They were Danylko Nehoda, Ivan Tsenki, Kyrylko and Askold Romankiv. Maria Lysobej, the community’s poet in residence, recited her poem to the bard, “Taras, Do Not Leave Us.” The program ended with the Maksymowich Trio leading the audience in singing “Zapovit.”

On March 19, a program honored the heroines of the Maidan. With their love of their country and their steadfastness, these brave women sustained the Revolution of Dignity. For months they withstood the bitter cold and remained loyal to the people on the Maidan by feeding, clothing, encouraging and keeping them warm.

With the showing of the film “Women of Maidan” produced by photojournalist Olha Onyshko and Petro Didula, the Ukrainian community of Miami was brought back to those chilling but uplifting days. The film was an honorable tribute to these women. Olha Sperkacz, president of UNWLA Branch 17 in Miami, introduced the film, which was sponsored by donations from members of the branch.