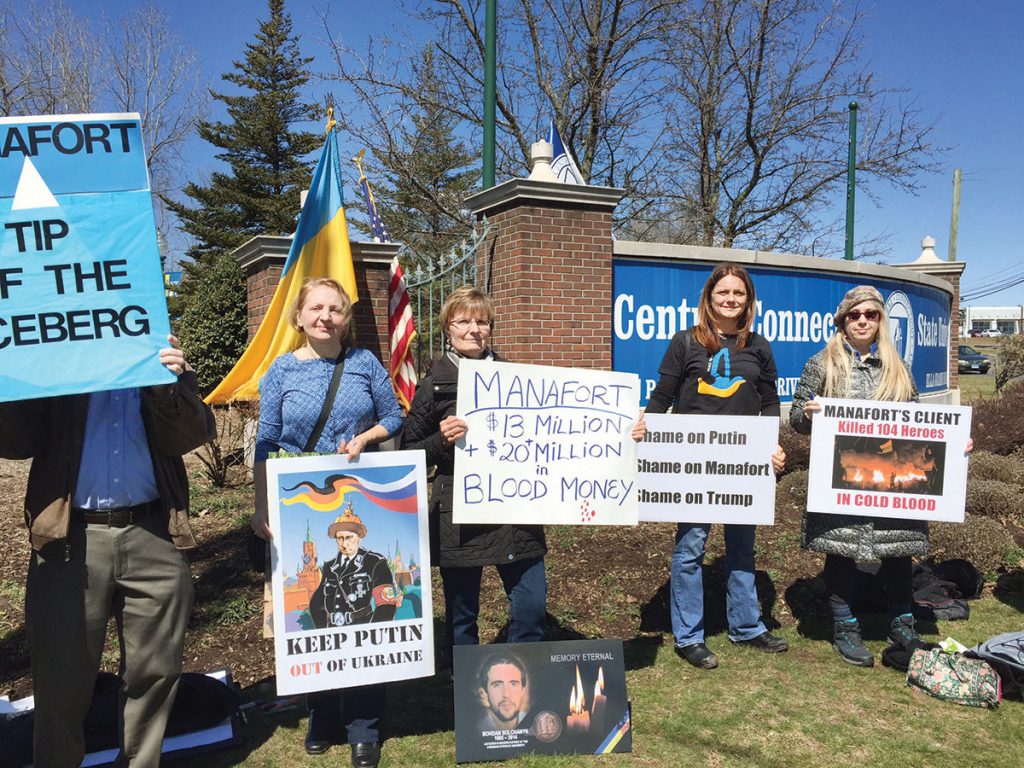 Organized by the newly formed group Ukrainian-Americans for Compassion, Truth and Transparency (UACTT), the protest focused on new revelations by the Associated Press published on March 22 which reported that beginning in 2005 Mr. Manafort had received tens of millions of dollars from Russian oligarch Oleg Deripaska, a close ally of Vladimir Putin, to develop a strategic plan for promoting Russian national interests and penetrating the American political process.

In these newly revealed communications with Mr. Deripaska, Mr. Manafort promised to exert Russian influence “at the highest levels of power, including the White House, Congress and the State Department.” Mr. Manafort also helped the Russians to develop an ambitious political strategy to undermine anti-Russian opposition in former Soviet republics, including Ukraine. These revelations countered Mr. Manafort’s claims that he had never knowingly promoted Russian interests.

“Manafort wanted to fill his pockets with the Russians’ money against the Ukrainian people,” said Valerie Menditto of Berlin, Conn., a Ukrainian American who grew up in Mr. Manafort’s hometown of New Britain.

Mr. Manafort was forced to resign as Mr. Trump’s campaign chair last August after the Republican convention, when it was revealed that he received nearly $13 million from pro-Russian oligarchs.

The protesters demanded that the U.S. Justice Department bring Mr. Manafort to justice for his blatant violations of the Foreign Agents Registration Act requiring lobbyists to register and report their services on behalf of foreign powers. Violations of this act can carry penalties of up to five years in prison. They also demanded that Mr. Manafort be fully investigated by an independent prosecutor for potential acts of treason and tax evasion for millions of dollars in earnings from a hostile foreign power.

“My issue with Manafort is that he has a long history of supporting unsavory regimes,” said Bohdan Pokora of Glastonbury, Conn. Holding a sign that read “Putin & Manafort – no conscience, no morals, no class,” Mr. Pokora told the Hartford Courant that he believes Mr. Manafort is guilty of treason.

“It’s bad enough that Manafort served Viktor Yanukovych at a time when the Ukrainian president sought to crush the pro-democracy movement in Ukraine,” said Alex Kuzma of Glastonbury. “Manafort’s client ordered the brutal murder of more than 100 demonstrators on the streets of Kyiv before fleeing the country to Russia in 2014. But now we’re learning that Manafort’s agenda went much deeper – to undermine democracy and support Putin’s policies in the United States and other countries.”

The protesters assembled at the crossroads of Connecticut Route 175 and Taras Shevchenko Highway (Route 9) in front of a sign directing drivers to Paul Manafort Drive, named after Mr. Manafort’s father, a former mayor of New Britain.

Protesters also urged President Trump to denounce Vladimir Putin for his war of aggression against Ukraine. They also demanded that Mr. Trump denounce Mr. Putin for the Russian government’s brutal violations of human rights, including the imprisonment of Ukrainian and Crimean Tatar activists, as well as Russian pro-democracy activists, and for the murders of Boris Nemtsov, Anna Politkovskaya and other journalists, whistleblowers and opposition leaders.

“Donald Trump has stated repeatedly that he is a great admirer of Putin,” said Roma Romaniv, a member of UACTT and a senior at the University of Connecticut. “The president ignores the fact that Putin is responsible for the deaths of over 10,000 Ukrainians in a war of aggression that he launched in 2014. The American people deserve to know how much Manafort and other Russian sympathizers continue to exert influence on the president and his Cabinet.”

The protest received extensive coverage in the local Connecticut media, including a front-page photo and story in the Local Section of the Hartford Courant, the New Britain Herald, WTIC Radio and Fox-61 Evening News.

When Manafort was contacted by the Hartford Courant for his comments on the protest, he was quoted as saying: “When people say that I was involved in a pro-Putin administration, number one, they don’t understand that Yanukovych and Putin were enemies for most of the four years of his term. Number two, the main accomplishment of Yanukovych was to set the stage for Ukraine to be in Europe, which is pro-American and pro-Western, not pro-Russian.”

“Manafort’s rebuttal is totally misleading,” said Eugene Babij, a protester from Manchester, Conn. “Calling Putin and Yanukovych enemies? In his first year as president, Yanukovych in 2010 agreed to extend the Russian naval base lease in Sevastopol from 2017 to 2042. Putin must have loved his ‘enemy’ for that. And then in 2013 Yanukovych betrayed his promise to join the European Union, which was the catalyst for the anti-government demonstrations at the Maidan. I guess Putin must have pulled his ‘enemy’ puppet’s string really hard. And then here was the Deripaska connection, where Manafort worked through him to promote Putin’s policies in the U.S. Whatever Manafort’s direct role in all of this, it certainly had nothing to do with pro-Western interests.”

The protest drew support from beyond the Ukrainian community as well. Sunny Torres and Bruce Baldwin, members of the group Democracy Awakens, drove down from Harwinton, Conn., when they heard of the protest. Holding a sign that read “Judas, Benedict Arnold, Paul Manafort,” Ms. Torres said she wanted to show her disdain for a man who betrayed America’s national interests.

Lew Rakowsky drove all the way from Rhode Island. As one of UACTT’s founding members, he told a reporter from the New Britain Herald that his parents fled Ukraine and knew firsthand what a country without democracy could be. “The Trump administration does not believe in truth,” said Mr. Rakowsky. “When we lose track of what’s true, we lose trust, and when we lose trust we lose the ability to have rule of law. Ultimately, we lose our democracy.”