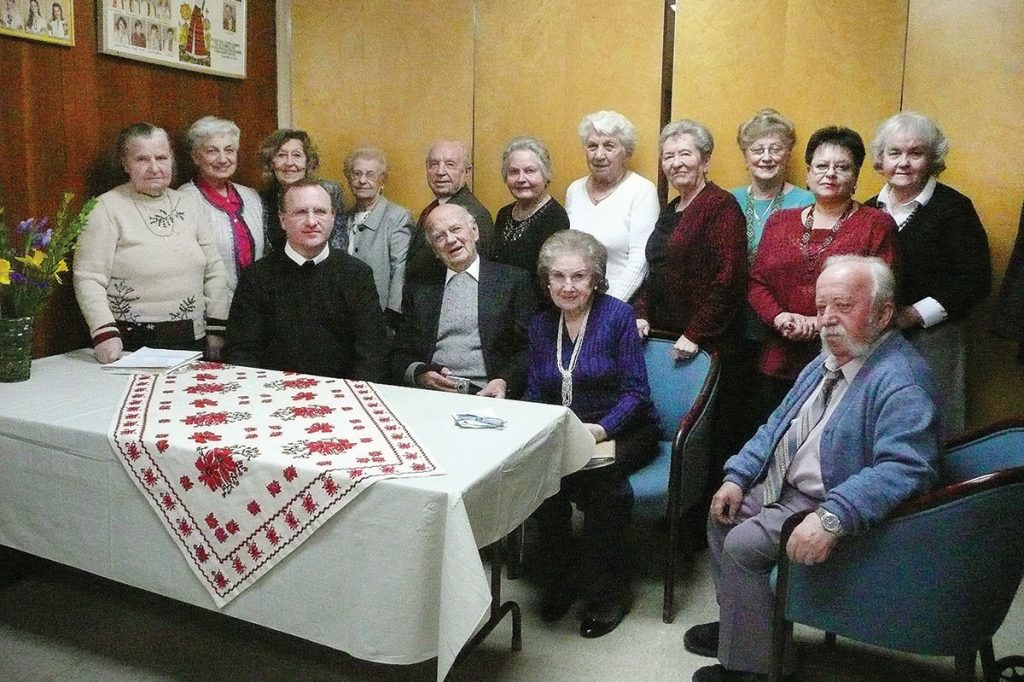 Jurij Stecko
The executive board of the New York branch of the Selfreliance Association of American Ukrainians, the meeting presidium and a participant from New Jersey; seated at the table (from left) are: The Rev. Artemiy Novitsky, Natalia Duma and Oleh Lopatynsky.

NEW YORK – The regular general meeting of the New York Branch of the Selfreliance Association of American Ukrainians (SRAAU) was held on Sunday, April 2. The meeting was significant because it was held on the 70th anniversary of its founding in 1947 by post-war Ukrainian immigrants coming to the U.S.

Ever since its establishment, the association has worked for the good of the Ukrainian American community, including by providing social service programs for the elderly and newly arrived emigrants as well as sponsoring the Self Reliance School of Ukrainian Studies. The Selfreliance Association of American Ukrainians Inc. is also the initiator of an organization of Ukrainian professionals in the U.S. as well as the Self Reliance Ukrainian Federal Credit Unions.

The branch president, Natalia Duma, opened the meeting by welcoming the attendees and the president of the SRAAU board of directors, Oleh Lopatynsky. An invocation was offered by the Rev. Artemiy Novitsky, OSBM, and a minute of silence honored the memory of deceased members. Thereafter, Motria Milanytch was elected as the meeting’s chair and Daria Rekucha as the secretary. The minutes from the previous meeting were read by Daria Drozdowsky and the reports of branch officers followed.

The financial officer, Anna Safian, reported in detail the income and expenses for the past year and subsequently presented the aims of the budget for 2017.

The office administrator, who is also the recreational and social services officer, Oksana Lopatynsky, spoke about her everyday managerial work and assistance to elderly members, in particular, those who find themselves in difficult circumstances or immigrants who do not speak English, who come to the association with a variety of problems. As a social welfare officer, she said she received many letters from Ukraine requesting assistance. As a recreational officer, Mrs. Lopatynsky said her emphases were weekly exercises, crocheting, bingo games, excursions and holiday events such as the Thanksgiving dinner that is well attended by the seniors.

The program officer Irene D’Alessio, who worked at the office two days a week as a volunteer, presented the particulars of the program for the elderly for which she submitted grant proposals to New York City Councilwoman Rosie Mendez in order to continue receiving funds, which the association has been receiving for the past 20 years. The goal of the program is to enrich the lives of seniors with a variety of activities. In the social services area, she talked about the advice she was giving seniors and their families regarding social assistance, as well as her visits to members with serious health problems in their homes or nursing homes. Ms. D’Alessio expressed her appreciation to volunteers and recognized Neonila Onuferko, who joined the team.

Rounding out the reports was the president, Mrs. Duma, who gave a short summary of the branch’s activities and expressed her sincere appreciation to all the officers for their contribution to the success of the association’s activities.

The Comptrollers Commission and the Mediation Board also presented reports. Participants unanimously upheld the comptrollers’ motion for a vote of confidence for the governing body.

On the proposal of the Nominating Committee, consisting of Ms. Safian (chair), Olha Gnoj and Bohdanna Slyz, the participants unanimously re-elected Mrs. Duma as the president of the branch executive board and Ms. Drozdowsky, Ms. D’Alessio, Donna Lopatynsky, Oksana Lopatynsky, Ms. Milanytch, Ms. Onuferko, Ms. Safian, Ms. Sawczuk and Jurij Stecko, M.D., as members. Elected to the Comptrollers Commission were: Wolodymyr Kornaha, Wolodymyr Safian and Ihor Stecko; and to the Mediation Board: Ms. Onuferko, Kateryna Pliszak and Stefania Semuchak.

At the end of the meeting, Mrs. Duma thanked the attendees and invited them to socialize at an early dinner procured by Mmes. Lopatynska and Safian.