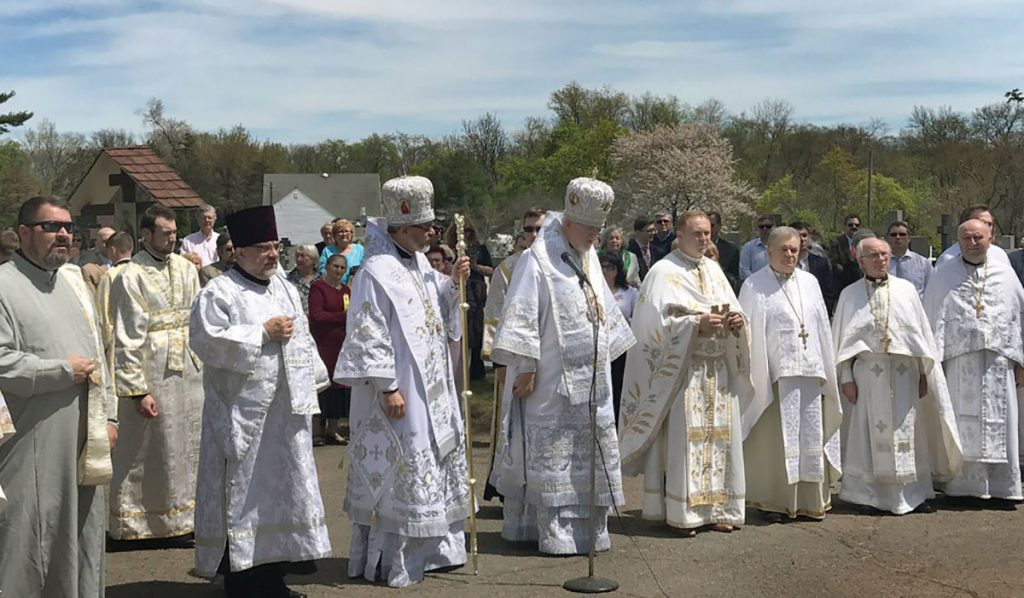 SOUTH BOUND BROOK, N.J. – Early Saturday morning, as the robins were singing their songs and the geese were flying overhead, silhouetted against the darkening clouds, the words “Христос Воскрес/Christ is Risen“ echoed cheerfully through the Metropolia Center of the Ukrainian Orthodox Church of the U.S.A., echoing through the damp air across the complex.

As the bells of St. Andrew Memorial Church began to chime, the faithful made their way up the steps and with awe entered the newly renovated church.  The icons twinkled in the candlelight as Archbishop Daniel began the divine liturgy.  The church was filled with the members of the Metropolitan Council, who had remained after their meeting that had concluded on Friday, as well as individuals who had arrived for the St. Thomas weekend activities.

After divine liturgy, Archbishop Daniel along with the faithful proceeded to the cemetery to serve memorial services at the gravesites of loved ones. While serving a “panakhyda” at the grave of Protopresbyter Michael Zemlachenko, the heavy grey skies opened up, drizzling cool sweet water over the faithful, hiding the tears of many of the mourners.

Throughout the cemetery, umbrellas popped open and while the conditions became wet, it did not dampen the spirits of the faithful who carefully walked among the graves, visiting and praying for the departed.  As the sweet chords of “Christ is Risen” traveled in the damp air over the river and to the Metropolia Center, a multitude of vendors were arriving and setting up shop in the Ukrainian Cultural Center.  With damp hair, but warm hearts, those present happily prepared for Sunday’s warmer temperatures, and anticipated greater crowds.

Nearly 100 people arrived at St. Sophia Theological Seminary for a picnic, sponsored by the Ukrainian Orthodox League. Seminarians treated everyone to the traditional barbeque. The evening concluded with the celebrations of vespers at the Seminary’s Three Holy Hierarchs Chapel.

As the bells of St. Andrew Memorial Church began to peal, echoing throughout the Metropolia Center, the faithful who had arrived for the St. Thomas Sunday festivities gathered at the foot of the church steps to greet their hierarchs. The children of St. Andrew Memorial Church School under the leadership of Director Halyna Martynec, dressed in Ukrainian “vyshyvanky” (embroidery), squirmed and rehearsed the words they would say upon greeting Metropolitan Antony and Archbishop Daniel.

The hierarchs, preceded by clergy from local parishes, where resplendent in their Paschal white vestments as they walked up to the steps to the church. Both hierarchs smiled broadly as the youth of the parish came forward greeting them and handing them bouquets of roses.  Having happily accepted the gifts, the hierarchs spread their arms wide enclosing the children in a wide group hug.

The hierarchs were welcomed to the parish by “Pani Matka” Lesia Siwko, along with the parish elder Dmytro Kozluk, and finally by the parish pastor, the Very Rev. Yurij Siwko. Metropolitan Antony thanked everyone, and prayed that God blesses the parish family of St. Andrew Memorial Church, along with all the guests, with much health, happiness and many blessed years.  With the clergy leading the way in to the church, the choir, under the leadership of Dr. Michael Andrec, exploded in a joyous and magnificent rendition of “Christ is Risen”!

The divine liturgy, which is always glorious, seemed even more so, with both hierarchs concelebrating, surrounded by a cloud of clergy and altar servers. The faithful filled the church, pushing forward as far as they could, while many overflowed onto the front porch and entry steps.

At the conclusion of liturgy, Metropolitan Antony took the opportunity to remind everyone of just how blessed we are here in the United States, living in relative peace and comfort, while others in the world are suffering, wars are raging, and people are dying.  He instructed us to be kind, loving and generous, concluding by assigning us all with a relatively simple, yet, crucial duty.

Before concluding the service and heading outside, the hierarchs took a moment to greet a couple of special guests – Rem Bahautdinov and his wife, Margareta. Mr. Bahautdinov had created a large bronze icon, which now hangs on the wall near the church entrance, depicting the history of Christianity in Kyivan Rus’.  In addition to the above-mentioned iconographic depiction, Mr. Bahautdinov presented the Metropolia Center of the Church with six other works, which will be displayed at the Ukrainian Historical and Educational Center of New Jersey. The faithful made way as the hierarchs headed to the back of the church, where they blessed the icon, as well as the newly renovated side chapel.

The faithful then poured out of the church, milling about the steps, awaiting their hierarchs, who emerged and led the procession around the church, through the St. Andrew Cemetery to the Great Memorial Cross in the center that in 1971 was erected in memory of those who gave their lives fighting for the independence of Ukraine.  Here, the hierarchs stopped and served a short memorial service, asking God’s mercy on the souls of those who have fallen asleep in the Lord.

Completing the service, the hierarchs led the way down to Holy Resurrection Mausoleum to serve a panakhyda at the tomb of Patriarch Mstyslav. Gathering around his tomb, Metropolitan Antony’s, and Archbishop Daniel’s voices swirled around the small chamber, echoing off the marble walls, carrying through the halls of the mausoleum and up through the open doors to the faithful standing outside.

While some people lingered at the patriarch’s tomb to pray, others walked to the side room to look at archives pertaining to the patriarch’s life, including his vestments and miter. The hierarchs proceeded back to the front of the church property to the Ukrainian American Veteran’s Memorial, where they served yet another memorial service in gratitude to all those who laid down their lives protecting their country and loved ones.  With flags sharply flapping in the breeze, people prayed as Archbishop Daniel censed the monument, and Metropolitan Antony placed a wreath before the memorial. Everyone fell silent at the conclusion, as a lone trumpet played Taps.  The lonely melody echoed off the black marble of the monument, touching the hearts of all present.

As the hierarchs walked back towards the church, having concluded the general ceremonies, the people spread out along the cemetery, to visit various gravesites. The cemetery, which is usually thought of as a dark and lonely, if not spooky place, reserved for the dead, was overflowing that day with life.  People were singing, talking, re-telling stories and episodes from the lives of the departed, as priests prayed at various graves, and children darted among the headstones, squealing with joy and laughter. The cemetery was not dead today, but very much alive.

For those who did not pack a meal, the Sisterhood hall was once again offering super delicious Ukrainian fare.  The hall quickly filled to capacity as patrons enjoyed varenyky, holubtsi, pork cutlets, sauerkraut, sausage, and countless other dishes and desserts.

Having prayed for their loved ones, many people walked over the bridge to the Consistory Complex, climbing the steps to the Cultural Center, pausing to take photos at the “Ukrainian Hut,” and then wandering inside the center to purchase any number of Ukrainian gifts.  The stalls overflowed with jewelry, embroidered shirts, pysanky, T-shirts, scarves, embroidered tablecloths, as well as all manner of religious items such as icons, service and prayer books, and church supplies such as incense, candleholders and icons.

The day concluded peacefully with an ice-cream social, as the hierarchs, along with many from their flock, relaxed on the veranda of the St. Sophia Theological Seminary, enjoying refreshments as the youth played soccer below, while other children played with balloons, balls and yet others enjoyed their second bowl of deliciously cold ice-cream.

As the sun began to set in the west, painting the sky in various shades of purple and red, the faithful began packing up and departing the Metropolia Center.  The hubbub of human laughter and activity was slowly replaced by the songs of the birds, and the honking of the geese.  Hours of festivities seemed to fade away in minutes.