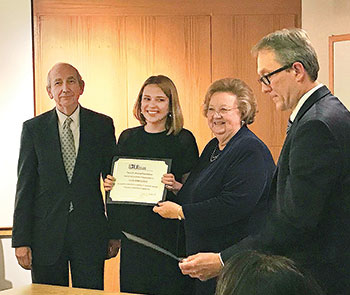 WASHINGTON – On May 3, the U.S.-Ukraine Foundation organized an event marking World Press Freedom Day, an annual international observance established by the United Nations General Assembly in 1993.

On this date, the global community celebrates the fundamental principles of press freedom, assesses press freedom around the world, recommits to defending the independence of news media and honors journalists killed in the line of duty.

The keynote speaker at the USUF event was Roman Popadiuk, the first U.S. Ambassador to Ukraine and a deputy press secretary in the White House during the Reagan and Bush presidencies. Ambassador Popadiuk discussed the crucial role of journalists in a democratic society and shared some highlights from his days in government as the Soviet Union collapsed and Ukrainians established their independence.

The event included an awards ceremony recognizing about two dozen Washington-area journalists from the Voice of America, The Ukrainian Weekly, 1+1 TV, the Ukrinform New Agency, the Atlantic Council’s “Ukraine Alert” and other media, for their “exceptional dedication in covering U.S.-Ukrainian relations.”