WFUWO participates in 61st session of U.N. Commission on the Status of Women 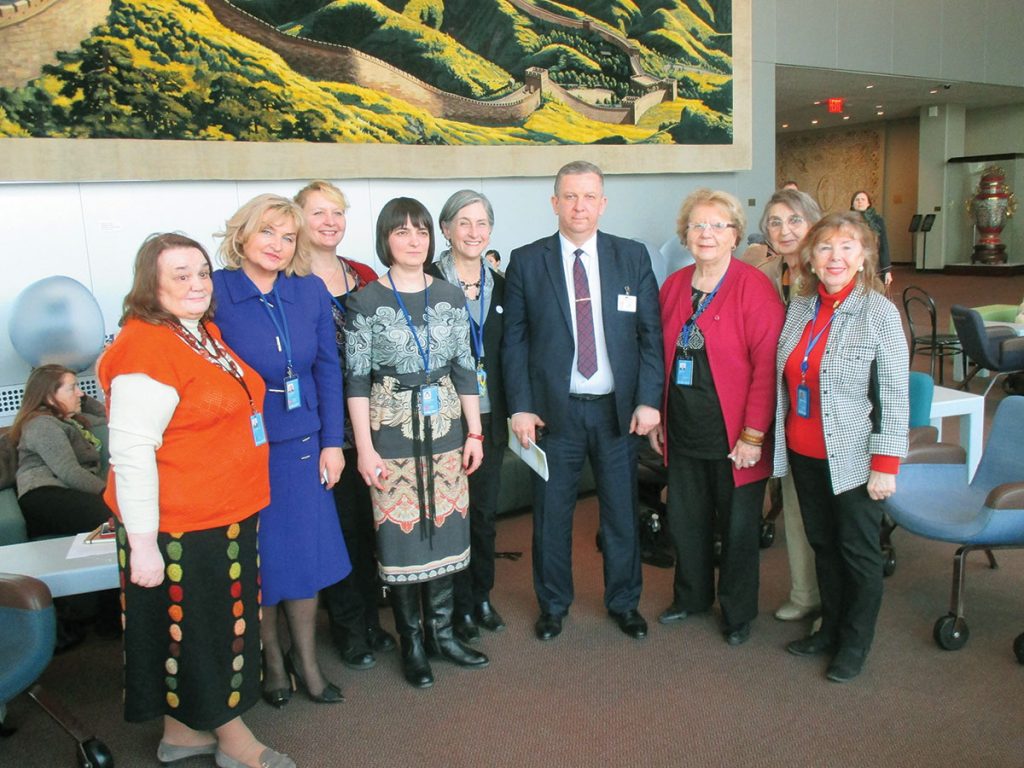 UNITED NATIONS – The United Nations event that annually draws the highest number of participants to U.N. Headquarters in New York City is not the opening session of the General Assembly in September, with the dramatic arrival of diplomats, ministers and presidents, but the Commission on the Status of Women (CSW) that is held annually in March.

This year, CSW 61, a two-week event on March 13-24, attracted close to 4,000 participants from 580 civil society organizations from 138 countries, 165 U.N. missions and representatives of government and non-governmental organizations. Panels and cultural events were held at more than 100 venues throughout New York City.

This annual event, noted Dora Chomiak, a board member of Razom for Ukraine and a participant in this year’s CSW, “is the uber-networking event for women internationally,” a place where bonds and friendships are established and sustained for years.

Whereas the World Federation of Ukrainian Women’s Organizations has been involved with U.N. initiatives for almost 70 years, beginning with the establishment of the WFUWO in 1948, since gaining official affiliation with the U.N. Department of Public Information in November 1990 and with the U.N. Economic and Social Council (ECOSOC) in 1993, the WFUWO has been the lynchpin organization at the U.N. for events of concern for Ukrainian women worldwide. The WFUWO often works in close cooperation with the Permanent Mission of Ukraine to the United Nations.

In the mid-1990s, the WFUWO was one of the first international organizations to focus attention on the problem of sex trafficking of women from Eastern Europe that began after the collapse of the Soviet Union. Over all, WFUWO-organized events and expert panels have served to cultivate greater awareness about numerous issues that impact Ukraine and Ukraine’s women in their striving for full democracy, sustainable development and gender equality.

Among the topics raised during the meeting were Ukraine’s plan for implementing U.N. Security Council Resolution 1325 on Women, Peace and Security, which was passed in 2000.

Ukraine’s National Action Plan (NAP) for UNSC Res 1325, adopted in February 2016, aims to eliminate the barriers that hinder the full participation of women in all aspects of negotiations and resolution of conflicts and/or matters of peace and security at the national level – a particular timely and essential issue for Ukraine given Russia’s continuing aggression against Ukraine. Women and children in Ukraine have been most adversely affected by Russia’s invasion of eastern Ukraine and its occupation of Crimea, representing a disproportionate number of the 1.5 million internally displaced persons. Women need to be included in discussions and actions regarding the resolution of these conflicts and discussions of restitution. Input from women must be sought in any resolution of the political and humanitarian crisis.

Further underscoring the importance of UNSC Res 1325 for Ukraine, the WFUWO was among the co-organizers of an event hosted on March 16 by the Permanent Missions of Austria, Finland, Kazakhstan and Ukraine, and moderated by Ambassador Melanne Verveer, to publicly introduce the Regional Women’s Peace Dialogue Platform in Southern and Eastern Europe and Central Asia. The WFUWO is an original partner, together with the United Methodist Women, of a Women’s Peace Dialogue Project, which began as a bilateral Ukraine-Russian Federation encounter between representatives of civil society – in particular, women’s NGOs, and subsequently was expanded to countries across the region. The goal is to cultivate mutual understanding, share concerns, establish a network of women peace-building practitioners and a pool of women experts in conflict resolution, mediation and prevention.

During the 10 days of CSW, the WFUWO was among the co-sponsors or host of several additional events, including a session organized by the U.S. League of Women Voters devoted to the fuller participation of women in the world’s parliaments; a panel organized by the U.N. NGO Committee on Mental Health on March 23, in which Mrs. Kurowyckyj and Dr. Porokhnyak Hanowska participated; a panel on women’s entrepreneurship; and an evening at the Shevchenko Scientific Society devoted to the presentation of a new publication in Ukrainian about domestic violence, both of which were held March 18.

The topic of regaining empowerment after displacement due to war was the theme of a panel titled “Women’s Entrepreneurship in a Context of Displacement: Focus on Ukraine” that was organized by the WFUWO and held on March 18 at the U.N. Church Center. Women in all economies – especially those in conflict or crisis where women are displaced – require special encouragement to venture into economically empowering projects, undertake beneficial career moves and cultivate business involvement.

Speakers offered insights from a spectrum of possibilities, from technology to crafts, of providing women with opportunities by sharing ideas and tools to provide economic and political empowerment.

The women most severely impacted by the crisis in Ukraine, noted both Dr. Porokhnyak Hanowska and Ms. Gershon, are older women, whose employment depended on a particular location or business and have difficulty transferring their skills, or finding a similar job in cities to which they have relocated because of the war. Dr. Porohnyak Hanowska noted that the small stipends that mothers and wives of men serving in the war receive are often a dislocated family’s only source of income; thus, they survive at a below-poverty level.

Project Kesher, with branches in 70 locations throughout Ukraine, has been working in Ukraine for more than 20 years, originally reaching out to women in Ukraine of Jewish descent. Over the years, Project Kesher has expanded efforts, becoming a critical partner in Ukraine’s network of social welfare organizations. Through its centers, Project Kesher offers basic computer training to women who previously had worked in factories or in agriculture and have no such skills with technology. These women have been displaced twice – first by war and then by a worldwide revolution in technology – and are struggling as sole providers for their relocated families. Ms. Gershon underscored Dr. Porohnyak Hanowska’s point that Ukraine is undergoing a huge humanitarian crisis that the existing social welfare infrastructure is ill-equipped to resolve without major international support.

Ms. Shykalova and Ms. Rohachova, representing a younger generation that is very proficient with modern personal technology, noted that training women in technology and offering portable jobs skills (such as graphic design, accounting, software design or computer programming) means that women can work locally, nationally and even internationally, and that new technologies offer the greatest tools of flexibility and empowerment for women. They concurred with comments that Ukraine is currently experiencing a brain drain among young people because of the war and that those who have education or other possibilities search for options outside Ukraine. Whereas earlier, after the dissolution of the Soviet Union, many Ukrainian women left to perform unskilled, menial labor abroad in domestic work and the caretaking field, women today are more often seeking professional employment.

Ms. Polansky noted that Ukraine has risen rapidly in the fashion world, that Ukrainian fashion – design and production – could become an important avenue of trade for Ukraine. She noted that Ukraine’s creativity and its rich history in textiles that are mass-produced, individually crafted or even made as fine art can be channeled and developed as a source of employment and empowerment for women. The ability to establish cottage industries in crafts exists in Ukraine, and there is ample international experience and models in other countries to serve as examples. However, public or private ventures need to support such start-ups and improve the ability to deliver products to markets.

The violence is not only spousal, with husbands beating their wives as the most well-known scenario, but also includes examples of parents beating their children (especially fathers/step-fathers and sons), elder abuse and violence between siblings. Poverty, high rates of alcoholism, a legal system that is accepting of many forms of violence, and local law enforcement that is unresponsive, all contribute to this situation.

Among the panel speakers were Dr. Pauline G. Rankin of Carleton University, author of the introduction to the book and consultant to the Canadian project Quality and Accessible Legal Aid in Ukraine that is funded by the government of Canada; Dr. Kateryna Levchenko, executive director of LaStrada-Ukraine, one of two main NGO participants of the project, who authored the preface and other aspects of the book; and Olha Dunebabina, an actress and activist involved in LaStrada’s outreach and domestic violence hotline.

This volume is the inspiration of Larysa Denysenko, the book’s managing editor, a journalist with Hromadske Radio in Ukraine. Hromadske Radio became a partner in the overall project through its “Combat Violence in Families” radio program. WFUWO President Sushko, a Canadian citizen and formerly the equity coordinator for the Hamilton Public Board of Education and chair of the Hamilton Status of Women Committee, lauded the project, expressing her pleasure over her government’s involvement, and her pride, as former chair of the WFUWO Committee on Human Trafficking, in the WFUWO’s efforts on this issue. The panel was moderated by Dr. Kebalo, who also introduced the guests from the International Council of Women with which the WFUWO is associated and has been in partnership frequently over the years.

At the end of the first week of CSW 61, the WFUWO was also represented among the shareholders attending the annual meeting of Self Reliance (NY) Federal Credit Union on Sunday, March 19. Attending from WFUWO were Orysia Sushko, Oksana Sushko, Dr. Kebalo, as well as WFUWO UN/ECOSOC Representatives Sofika Zielyk and Dr. Daria Dykyj. Speaking before those gathered, WFUWO President Sushko thanked the board of directors for their many years of support for WFUWO initiatives, particularly those related to WFUWO’s work at the United Nations and in the New York area.

The March 18 panel on economic empowerment of displaced women can be viewed at: https://www.youtube.com/watch?v=xjs-gzSfRRs.

A free download of the publication “Pro Nas” is available at: https://hromadskeradio.org/sites/default/files/media/161 130_1458_pronas_site-1.pdf.

The book launch of “Pro Nas” can be viewed at: https://www.youtube.com/watch?v=CZoV5OM-v7U.