INTERVIEW: Ukrainian writer Serhiy Zhadan on his background and his work 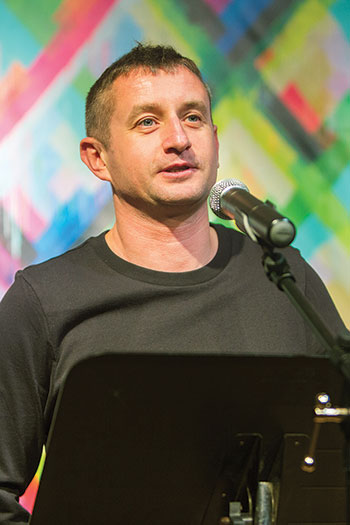 Serhiy Zhadan is a Kharkiv-based internationally known poet, novelist, musician and activist. He will be performing in “1917-2017 Tychyna, Zhadan & the Dogs,” a new Yara Arts Group piece at La MaMa Experimental Theatre Club on June 9-25. He was interviewed in New York in April during his U.S. reading tour, which included The Ukrainian Museum in New York, Yale University, San Diego, San Francisco, Stanford University, and in Chicago at the University of Chicago Bookstore and the Ukrainian Institute of Modern Art.

You were born in Starobilsk, in Luhansk Oblast, and lived there until you were 17 years old, when you moved to Kharkiv for university studies. Did you speak Ukrainian at home and in school?

At home we spoke surzhyk – a Ukrainian-based surzhyk with some Russian mixed in.  In Starobilsk we don’t speak literary Ukrainian, but we don’t really speak Russian. I went to a Ukrainian school where I studied language and literature. When I was in 11th grade I won the Ukrainian language “Olympiada” competition. I represented my school and then the Luhansk Oblast where I got second place.

What did your parents do, and what was it like growing up in Starobilsk? Was there much cultural or political activity?

My father was a driver, and my mother worked in a store. My older brother and parents still live in Starobilsk.  It was a small town. There were 40,000 people, but there were three bookstores and there was a “Palats Kultury” (cultural center) and a library. In Soviet times we had three local poets and they were published in the local newspaper, which was called Under Lenin’s Flag. Two of them were Ukrainian and one was a Russian-language poetess. They would come to school and visit. There were a lot of cultural activities, singing and dancing, like it was everywhere under the Soviets.

When did you begin writing poetry, was it in university or before then?

I started writing in high school. I did write some little poems but, no, I don’t have the poems that I wrote then. They’re definitely not worth reading at this point. When you write them you’re not thinking about eternity or the future. But I always wanted to be a writer. I was especially encouraged by my aunt on my mother’s side, Oleksandra Kovalova, who was a poet and translator. She gave me interesting books to read, for instance, Lina Kostenko, Vasyl Stus and Ivan Svitlychny, who was also from Starobilsk. In my last years at school I visited my aunt in Kharkiv, where she taught at the Kharkhiv Pedagogical University, which I eventually attended.

At university you wrote about Mykhaylo Semenko, the famous futurist writer. What did you discover about him?

When I first came to Kharkiv as a freshman, I discovered the Kharkiv Literary Museum. It’s an institution dedicated to preserving and popularizing Ukrainian literature. I started working there with a group of friends. At the “Lit Muzey” I had access to the archives of many writers, the literature of the 1920s and 1930, to the manuscripts of [Volodymyr] Svidzinsky, [Pavlo] Tychyna, [Volodymyr] Sosiura, Semenko. The atmosphere of that era was very important to me. This wasn’t simply literature, it became our world. So when I had to write a dissertation, I started writing about this period.

What other writers from the 1920s most interested you?

There were many. My thesis was about modernism and the avant-garde. I really liked them as poets, and at that point there was very little written about them. They initiated much of the Ukrainian literature that would become important for the next 100 years. Even today we still feel the influence of the 1920s. It was an unusually creative period which was cut off. Many interesting things still remain from that period and it’s important for us to take a look at them.

While you were studying literature, there were also historical events happening in Ukraine. When did you become politically active?

When I came to Kharkiv I became acquainted with the Ukrainian  community. I met a whole circle of people who were very politically active, who were constantly doing some kind of demonstrations, events. That circle started up in the 1980s, and they defended Ukrainian language and rights, democratic reform. There was Rukh, the Prosvita Society and other patriotic groups. From the end of the 1980s I became interested. At the beginning of the 1990s I remember meeting people at demonstrations, who came out to defend Ukrainian independence. That was my circle of friends.

While in university, what other authors outside of Ukraine were you interested in?

I was interested in Russian literature, Polish, German, French, American. Too many authors to list. I was interested in literature as a whole, as a possibility of expressing yourself. I was particularly interested in German literature. While at the Kharkiv Pedagogical University, I did translations of Rilke. I was a lecturer there for several years. In 2004 I resigned and since then I’ve been a freelance writer.

Usually, we think of writers and poets as being solitary, introspective. When you began publishing, you went from town to town doing many readings at bookstores and schools. Was that to promote your books, or were you interested in performance?

I really like to deal with people, communicate with people. I like to see who my readers are. I think it’s very important for a writer to have a direct experience with his readers. Some people hate it, but quite frankly it doesn’t bother me.

You are very involved with music. How did that begin?

I have been friends with musicians since the 1990s. I started working with the band Sobaky (the Dogs) in 2007. It’s our 10th anniversary. I would describe the music as punk-ska. The lyrics of the songs are usually my poetry; once in a while they’re someone else’s.

Is writing lyrics different from writing poetry? What are the subjects of your songs?

You really have to grasp the fact that it’s going to be a song rather than a poetic piece. Songs have their own kind of rules, and the way you build them is different. But our songs have themes similar to my poetry. Both are socially aware, lyric poetry. In them we don’t avoid the moments of conflict in our society. We are actually interested in exactly that.

You’ve known Virlana Tkacz, director of Yara Arts Group, for many years. She and Wanda Phipps have translated your poetry. You’re now working with Yara on a theater project coming to La MaMa Experimental Theatre Club this June called “1917-2017: Tychyna, Zhadan and The Dogs.” Working with Yara seems like a natural collaboration, melding of literature, politics and music. How did this come about?

This is not our first year working together, nor our first project. The idea for this theatrical work was very organic. Many people are drawing parallels between the times of Tychyna and now. It’s a very pressing theme because it’s been 100 years and we go back and look at it, to analyze it, to understand how much we’ve changed, what were the mistakes, because we have to understand our past before we can move on. So this project seemed very natural.

In your political activism, you supported the Orange Revolution in 2004 and participated in Euro-Maidan demonstrations in 2013. You are very involved with the current conflict in eastern Ukraine, writing and speaking about it, visiting the frontlines in the Donbas region, you co-founded a charitable foundation.  You spoke yesterday at Yale University at an event hosted by Timothy Snyder, who wrote “On Tyranny: Twenty Lessons from the Twentieth Century.” You spoke about “Poetry and the War in Ukraine.” How did that conversation go?

We started with poetry and ended with politics. That’s usually any literary event that we’re a part of right now. It always starts with poetry and ends with politics. Ukrainian poetry is trying to deal with what is happening in Ukraine, to understand the social trends. Questions from the audience are usually about these kinds of things. People are trying to figure out the situation. They are very moved and concerned by the situation. I feel that one of the tasks of the writer is to give voice to the simple things we often forget.

Did you talk about American politics?

We didn’t really speak last night about politics in America. I can’t say I even understand what’s going on.  Ukrainians are, of course, very concerned about what’s happening in America. We want to see Europe and America as our allies in the war. Because of that, everybody is very concerned about what’s happening in America. We watched the elections. Some people were afraid. Some people were disappointed. Every statement by the president of America is discussed in great detail. Every statement by American politicians about Ukraine, of course, creates huge discussions in our country. In general, one can say that Ukraine’s society is just as concerned with American politics as the American community is.