Poroshenko meets with Trump, other senior U.S. officials in D.C. 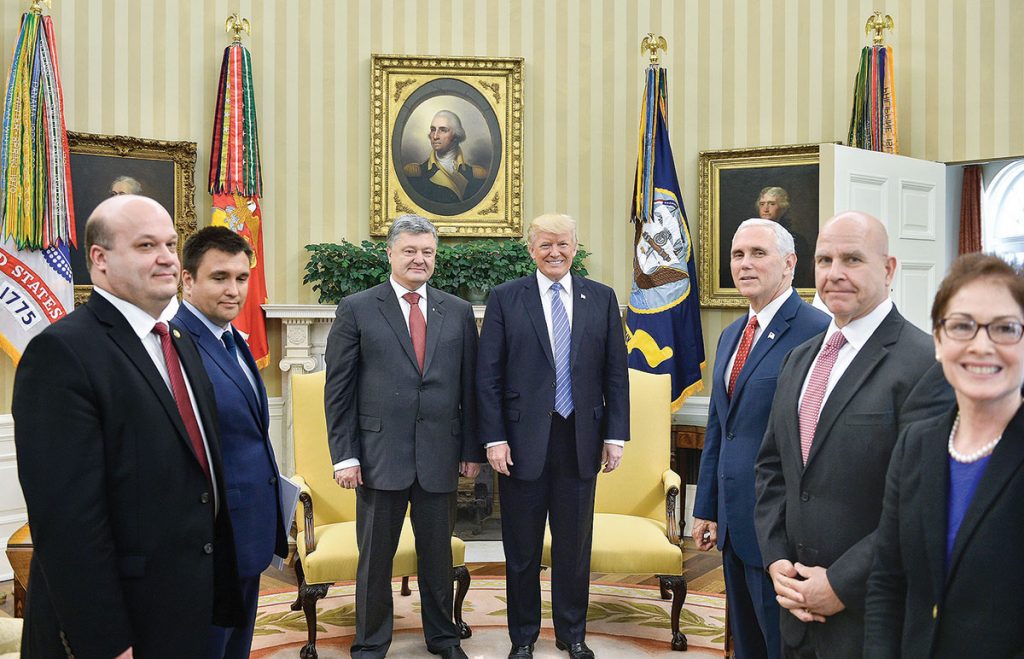 WASHINGTON – During his two days of meetings in the U.S. capital – with President Donald Trump and other senior officials in his administration – Ukrainian President Petro Poroshenko expressed his satisfaction with the support Ukraine was receiving from the United States, especially with respect to Russia’s aggression.

Talking to reporters outside the White House following his separate meetings there on June 20 with President Trump and Vice-President Mike Pence, President Poroshenko said, “I see the U.S.A. as our partner, and we are very interested in getting the U.S.A. involved.”

He noted that the U.S.A. is a “guarantor nation” in the Budapest agreement, and added that his White House meetings “underscored Ukraine’s importance to the United States and its decisiveness in assisting our nation.”

Mr. Poroshenko also reportedly said that Ukraine received strong U.S. support for its “sovereignty, territorial integrity and independence of our state, as well as support in the continuation of reforms in Ukraine.”

The Ukrainian president arrived in Washington on June 19 and began his visit that evening at the Ukrainian Holodomor Memorial by paying his respects to the millions of Ukrainians who died as a result of Stalin’s 1932-1933 Famine-Genocide.

He was joined at the memorial by more than 100 Ukrainian Americans from the Washington area, including local Ukrainian Catholic and Orthodox bishops, clergy and members of their church choirs., Also present was Larysa Kurylas, who designed the memorial, which was opened in 2015.

In his brief remarks to those who came to join with him to honor those killed in that man-made famine, President Poroshenko thanked the Ukrainian diaspora “for all they have done to help Ukraine get to where it is today.”

“Ukraine has accomplished more reforms since the Maidan revolution [in 2014]than in the previous 23 years of its independence,” he pointed out. He stressed: “Never will we return to the Soviet Union.”

The following day, accompanied by Foreign Affairs Minister Pavlo Klimkin – who had meeting with President Trump at the White House five weeks earlier – and other ministers of the Ukrainian government, Mr. Poroshenko’s had a tight schedule of meetings. In addition to his White House discussions, he had meetings with U.S. Secretary of State Rex Tillerson, Defense Secretary James Mattis, Energy Secretary Rick Perry, as well as the president of the World Bank Jim Yong Kim, and the managing director of the International Monetary Fund, Christine Lagarde.

On the same day that Presidents Poroshenko and Trump met at the White House, the U.S. Department of the Treasury announced it was imposing sanctions on over three dozen additional individuals and organizations that are complicit in Russia’s ongoing involvement in the conflict in Ukraine.

The last time President Poroshenko came to Washington was in March of last year, when he attended the three-day Nuclear Security Summit. Then, he also met with world leaders participating in the summit, as well as with U.S. Vice-President Joe Biden. His last White House meeting with President Barack Obama was in 2014, when he also addressed a joint session of the U.S. Congress.