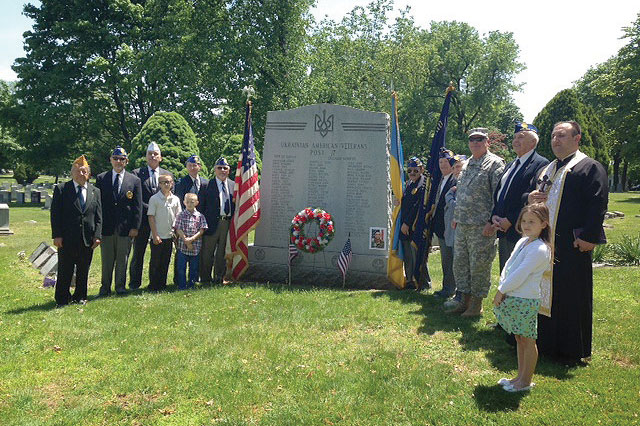 CLIFTON, N.J. – Ukrainian American Veterans Post 17 members and guests gathered on Sunday, May 21, at the Cedar Lawn Cemetery in Clifton, N.J., to commemorate those Ukrainian American veterans who proudly served their country, answered the call to duty and paid the ultimate price.

Post members remembered those who served in various police actions and conflicts, and have departed from this earth. Father Yaroslav Yarish from St. Mary the Protectress Ukrainian Orthodox Church conducted the memorial service. Taps were rendered by a post member’s son, Nazar Fedorko.

At the conclusion of the memorial service, Post Commander Walter Kovbasniuk invited all assembled to Kirchans Grill for the traditional post get-together. Among the assembled were veterans who are still active and are the oldest members of Post 17, Peter Babirad, 92, and Past National Commander Eugene Sagasz, 90. The lunch lasted about three hours as all reminisced about their service to the United States.

Also in attendance was Sgt. 1st Class Leonid Bulya, who was home on leave.