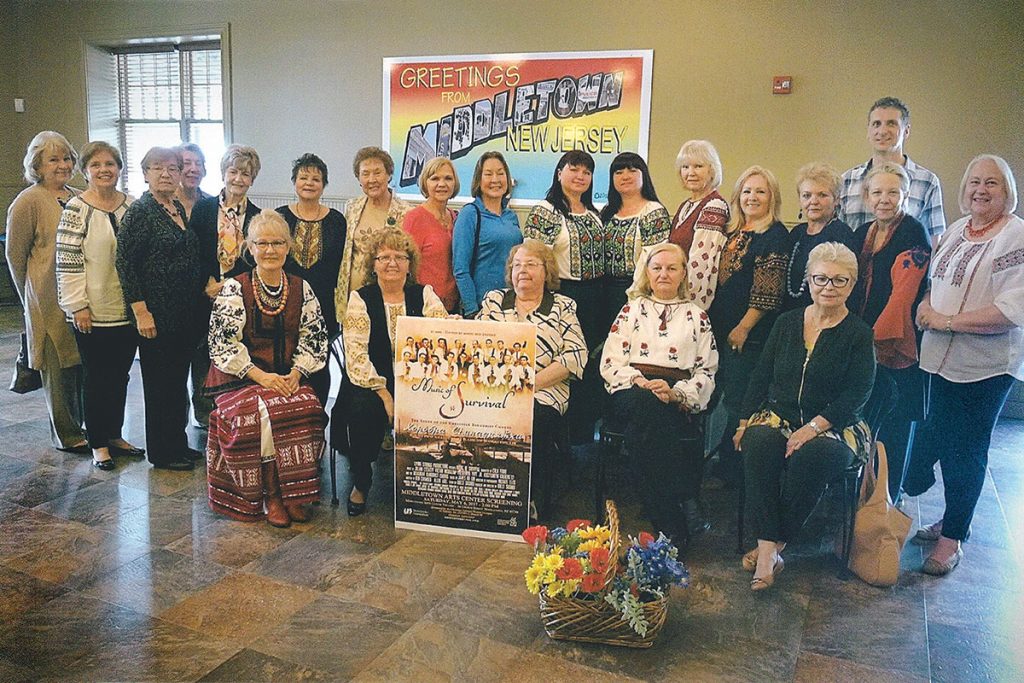 HOLMDEL, N.J. – On May 6 Ukrainian National Women’s League of America Branch 98 of Holmdel/Middletown, N.J., sponsored a screening of the documentary film, “Music of Survival, the Story of the Ukrainian Bandurist Chorus” at the theater of the Middletown Arts Center in Middletown, N.J.  The film tells the inspiring story of the original 17 members of the Ukrainian Bandurist Chorus through personal interviews with surviving members, extraordinary archival footage, and beautiful cinematography.

The screening was augmented by a bandura performance by New Jersey-based banduristka Oksana Telepko and her sister Halya Leskiw.  Both are graduates of the music college and conservatory in Lviv and have travelled and performed in Ukraine, Europe and the U.S.A.  They set the stage for the film by performing three emotionally stirring songs accompanied in part with beautifully harmonizing vocals.

The audience was treated to a surprise when film producer/ director Orest Sushko stepped up to the podium to introduce the film. An Emmy Award-winning independent motion picture and film professional with a 30-year career in production, Mr. Sushko is also a member of the Ukrainian Bandurist Chorus and has a proud familial history related to the bandura. His father was the first Canadian member of the chorus, having been invited by musical director Hryhory Kytasty to join the ensemble on their first cross-Canada tour in 1949-1950. His grandfather Pavlo Stepowy was a master craftsman who began crafting banduras in the 1950s, creating more than 75 instruments in his lifetime. One of his banduras resides in the Canadian Museum of History in Ottawa.  Both his father and grandfather were the inspiration for the film.

In her remarks, Nadia Jaworiw president of UNWLA Branch 98, noted that this year marked the 50th anniversary of the UNWLA Scholarship Program which has supported thousands of Ukrainian students in Ukraine and South America in completing their education, in spite of economic hardships. She also recognized Anna Krawczuk, who has worked tirelessly for the Scholarship Program for the past 36 years, including 12 years as its National Chair, and six years as UNWLA president.

The event was supported in part through the generous sponsorship of the Ukrainian National Federal Credit Union.

DVDs of the film were available for sale. For more information visit www.musicofsurvival.com.  UNWLA Branch 98 can be reached at Facebook at UNWLA Br. 98 – Holmdel/Middletown, N.J., est. 1988 and UNWLA98@gmail.com.