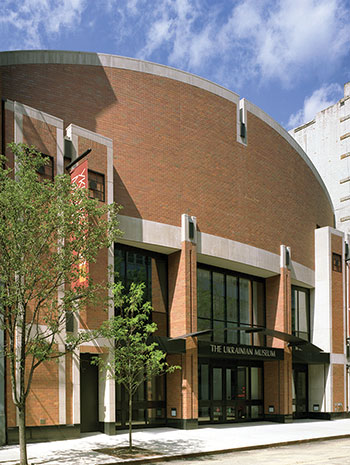 George Sawicki
The façade of The Ukrainian Museum.

NEW YORK – At the annual meeting of The Ukrainian Museum of New York on June 4, Chryzanta Hentisz was elected president of the Board of Trustees, succeeding Prof. Renata Holod of the University of Pennsylvania, who had served as board president since June 2013.

Ms. Hentisz, who is a litigation attorney at the law firm of Buglione, Hutton & DeYoe, LLC in Wayne, N.J., had been a vice-president on the museum’s board since 2014 and a member of the board since 2012. A longtime community activist and lover of the arts, Ms. Hentisz at one time ran an art gallery and organized a number of exhibitions featuring the works of Ukrainian American and Ukrainian artists.

“I am honored and thankful for the trust you have shown in me, and I look forward to working with the board, the administration and director Maria Shust, for whom I have tremendous respect, to continue the important work of the museum,” said Ms. Hentisz. “My sincere thanks to Renata Holod, with whom I’ve had the opportunity to work the past several years as both a board member and an executive committee member, for her dedication to the museum and for the incredible energy and passion she brought to each initiative during her tenure.”

Prof. Holod began the annual meeting by noting that the museum has gained extensive international recognition in the past few years. In early 2016, for example – the museum’s 40th anniversary year – the premier professional organization of curators and art historians in the U.S., the College Art Association, selected the exhibition catalogue “Staging the Ukrainian Avant-Garde of the 1910s and 1920s” from among thousands of possibilities as the recipient of its prestigious Alfred H. Barr Jr. Award for Smaller Museums, Libraries, Collections and Exhibitions.

“This award serves as a signpost for the roads to be taken by our exhibition program over the next 40 years,” said Prof. Holod, explaining that “Staging the Ukrainian Avant-Garde” had been developed in collaboration with the Museum of Theater, Music and Cinema Arts of Ukraine and that such collaborative exhibitions not only enable the museum to raise its profile, but also open doors to greater funding, particularly government and foundation funding.

She congratulated Ms. Shust on the “25 Years of Independent Ukraine” medal awarded to her by President Petro Poroshenko in recognition of her many contributions to promoting Ukraine’s historical heritage and modern achievements.

Prof. Holod then enumerated the museum’s immediate priorities: installing a state-of-the-art collections storage system; leveraging its collections to further raise its profile – by using them as the basis for collaborative and other exhibitions, for example, and sharing collections inventories on its website; expanding its education program, primarily through partnerships with other institutions; and developing closer ties to local Ukrainian schools, working with them to meet their needs.

“From our humble beginnings just 40 years ago, we’ve made huge advances and tremendous progress,” Prof. Holod concluded, “including an impressive new building, growing collections, world-class exhibitions and increasing international recognition. Let’s continue our work with renewed energy and focus on the next 40 years and beyond.”

For her many contributions to the museum’s advancement and her hard work on its behalf, Prof. Holod was given a standing ovation.

The museum’s director, Ms. Shust, then provided a detailed review of the museum’s activities in 2016 and early 2017. The museum’s 40th anniversary figured prominently throughout this report period. It was celebrated with several fund-raising events, including a mid-April luncheon at the iconic Tavern on the Green in Central Park and a June concert by Metropolitan Opera star Stefan Szkafarowsky, and will be celebrated again this fall with an art auction.

Ms. Shust took a few minutes to acknowledge the extraordinary contributions of several key individuals over the past 40 years, among them: Ivanna Rozankowska, the president of the Ukrainian National Women’s League of America (UNWLA), the museum’s founding organization, who was instrumental in establishing the museum; Alexandra Riznyk, the first president of the museum’s Board of Trustees; Dr. Bohdan Cymbalisty, who took over the presidency in 1979 and for 10 years focused his efforts on fund-raising and expansion; Titus Hewryk, who as board vice-president and later president, with his experience as head architect at the University of Pennsylvania’s Department of Facilities Development, led the committee charged with planning the museum’s new building, and who had, prior to his service on the board, curated two important museum exhibitions – “The Lost Architecture of Kiev” and “Masterpieces in Wood: Houses of Worship in Ukraine”; Olha Hnateyko, whose 10-year tenure as board president spanned the all-important construction and opening of the new museum building; Prof. Jaroslaw Leshko, curator of the new facility’s blockbuster inaugural exhibition, “Alexander Archipenko,” and of most of the museum’s fine art exhibitions, who also took on the board presidency for three years; the recently departed Mykola Darmochwal, who as board president leveraged his technological and organizational expertise to benefit the museum; Prof. Holod, who with her academic and museum-leadership credentials set the museum’s course toward accreditation and an even stronger financial foundation; Dr. Osyp Danko and Prof. John Luchechko, who devoted years of service as board presidents; and such departed board members as Tatiana Tershakovec and Dr. Yar Mociuk, whose efforts contributed to the museum’s development and growth.

“Each of these individuals worked tirelessly to broaden the museum’s impact and solidify its position on the New York, U.S., and international cultural stage, and they deserve our recognition and thanks,” said Ms. Shust, who also acknowledged the dedication of the museum’s staff, singling out the contributions of the late Martha Baczynsky and Nadia Svitlychna. “We must continue their work, continue to welcome new and younger members to our museum family, and continue to strengthen our financial foundation to ensure our future. We ask for your help in this – encourage your children, grandchildren and friends to become members, to attend our exhibitions and events, and to support our work.”

After thanking all the individuals whose donations continue to enrich and grow the museum’s collections, Ms. Shust reiterated Prof. Holod’s statement about the need for an updated, efficient, compact collections storage system, adding that the museum had already received a Collections Assessment Project grant that will cover the cost of a professional assessment by two consulting conservators this summer. The museum has also received donations from Self Reliance New York Federal Credit Union and two individuals towards the larger cost of purchasing the storage system itself.

Ms. Shust then provided an overview of the museum’s major exhibitions in 2016:

• “Jacques Hnizdovsky: Content and Style, Evolving Perspectives,” curated by Prof. Leshko, featured over 100 works, most of them the artist’s lesser-known oil paintings.

• “40 Years of Exhibition Posters at The Ukrainian Museum, 1976-2016” gave visitors an interesting perspective on the more than 120 exhibitions that the museum has staged since its founding.

• “Orest Skop: Cossack Mamai,” curated by Prague journalist Oksana Pelenska, included 22 works in the Lviv artist’s series, which he has dedicated to the 337 blind kobzary (poet-minstrels) murdered in 1934 on Stalin’s orders along with their child-guides.

• “In Metal, On Paper: Coins, Banknotes, and Postage Stamps of Independent Ukraine, 1991-2016,” curated by Dr. Yurii Savchuk of the Institute of History of Ukraine and mounted in collaboration with the institute, the National Bank of Ukraine and Ukrposhta (the national postal service), and “Money, Sovereignty, and Power: The Paper Currency of Revolutionary Ukraine, 1917-1920,” curated by Prof. Bohdan Kordan, director of the Prairie Center for the Study of Ukrainian Heritage at St. Thomas More College, University of Saskatchewan, marked the 25th anniversary of Ukraine’s independence. The opening of these exhibitions featured the cancellation of a 40th anniversary stamp created especially for the museum by Ukrposhta.

Ms. Shust also drew the attention of the annual meeting attendees to two recently opened exhibitions – the annual “Pysanka” (Ukrainian Easter egg) display and a unique, lighthearted look at “The Basketweavers of Iza” through the eyes of Kyiv photographer Anna Voitenko – and previewed several upcoming exhibitions, including one featuring an important collection of folk art that the museum recently acquired, another of Bohdan Borzemsky’s artwork and a third of 16th-17th century icons.

In the planning stages are an exhibition celebrating Ukraine’s 1917-1919 independence, to be organized by Dr. Savchuk of the Institute of History of Ukraine, and an exhibition of works by the avant-garde artist Oleksander Bohomazov, which will be developed in collaboration with Kyiv’s National Art Museum of Ukraine.

“Education has always been one of our highest priorities,” Ms. Shust underscored, enumerating the many ways the museum engages visitors to learn about Ukraine’s culture and history: guided tours; public programs such as film screenings, book presentations, conferences, lectures and concerts; customized school programs that include tours and workshops for students of all ages; folk art workshops; and various activities targeted at families with young children.

None of the museum’s work would be possible without its dedicated staff and devoted volunteers, the strong support of its members, or the generosity of its donors and sponsors, said Ms. Shust. She saluted each of her staff members, heralded the work of the museum’s long-time volunteers, including Anastazia Hirniak, who passed away in 2016, and paid tribute to the supporters whose major gifts have contributed to the museum’s transformation into a world-class cultural institution, among them Eugene and Daymel Shklar, Borys Halahan, Dr. Mary Beck, Pauline Bruggeman, Dr. Andrew and Tatiana Tershakovec, and the ever-supportive, ever-generous Self Reliance New York.

Board treasurer Zoriana Haftkowycz then thanked the museum’s donors for their support and presented a brief recap of the museum’s financial position. She reported that in 2016 the museum had revisited and updated its investment strategy in order to maximize its investment income while maintaining a low-risk, conservative approach. The museum had received two bequests during the year, from Dr. Alexandra Shkolnik and Olha Chypak, and six new memorial funds were established. The museum now has 61 endowment funds and 69 memorial funds, totaling $4,151,095 as of December 31, 2016. Ms. Haftkowycz also noted that the 400k Club, a fund-raising initiative launched to coincide with the museum’s 40th anniversary, had already met 78 percent of its target.

A brief report from the chair of the Audit Committee, Lydia Zaininger, confirmed that the committee had found “no material weaknesses or deficiencies” in the museum’s internal controls or reporting, and a short discussion period touched on endowment funds, future exhibitions and the museum’s library.

Marianna Zajac, president of the UNWLA and a vice-president of the museum’s board, paid tribute to the board’s outgoing president, Prof. Holod: “You’ve enabled The Ukrainian Museum to push boundaries and reach new heights. Under your stewardship, the museum marked the UNWLA’s 90th anniversary with a unique exhibition of works by Ukrainian women artists, celebrated the museum’s 40th anniversary with a host of events, and garnered important international acclaim and recognition.” Ms. Zajac also wished the incoming board president, Ms. Hentisz, much success and pledged the UNWLA’s collaboration and support.

The annual meeting was chaired by Iryna Kurowyckyj and recorded by secretary Natalia Sonevytsky.

New board of trustees

The 25-member Board of Trustees of The Ukrainian Museum is composed of representatives from the UNWLA, which occupies 13 of the seats (51 percent), with the remaining 12 (49 percent) filled by individuals elected from the broader community. Nine trustees are members of the executive board. UNWLA-affiliated trustees are appointed (their names are noted below with asterisks), while community members are elected for three-year terms that may be renewed.

Three new members were elected to the board: Christina Andrushkiw, a senior advertising executive with extensive experience in broadcast, print and digital production; Roman Hrab, an artist and the director of operations for the Studio Arts Program at Bard College in upstate New York; and Olena Paslawsky, retired vice-president, financial director and treasurer of New York City’s Metropolitan Museum of Art.

There were no changes to the composition of the Audit Committee, chaired by Ms. Zaininger; members are Alex Labunka, Stefan Peleschuk, Orysia Stryzak and Renata Zajac.