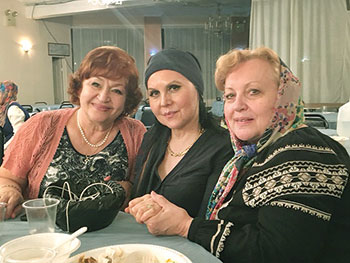 NEW YORK – On Thursday, July 22, members of the United Ukrainian American Organizations of New York (also referred to as UCCA-NY, a local chapter of the Ukrainian Congress Committee of America) attended an iftar held at the American Association of Crimean Turks (AACT) Mosque.

The community iftar is a nightly meal during the month of Ramadan at which Muslims end their daily fast together at sunset. Prior to sunset, prayers were chanted by Imam Adem Sakarya, who welcomed the Ukrainian community representatives and thanked them for making the special trip to their cultural center.

Located in Fort Hamilton in Brooklyn, the AACT is the oldest association of Ukraine’s indigenous Crimean Tatars in America. Similar in significance to New York City’s East Village for the Ukrainian American community, this community center and house of prayer has been the first point of call for decades of Crimean Tatar immigrants to the United States.

The visit by Ukrainian American community representatives was once again organized by Ayla Bakkalli, the United States representative of the Indigenous Crimean Tatar Mejlis and an executive member of the World Congress of Crimean Tatars. Attending for the fourth consecutive year were UCCA-NY President Ivanka Zajac, with her daughter Marianka, and Vice-President Andrij Dobriansky, with his wife, Pamela Edgar.