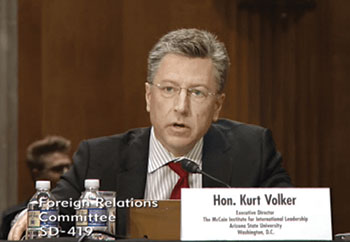 The Ukrainian Congress Committee of America (UCCA), which represents nearly 1.5 million Americans of Ukrainian descent, has respectfully requested a meeting with Ambassador Volker following his weeklong visit to Ukraine to discuss his new appointment as the United States special representative for Ukraine negotiations.

News of Ambassador Volker’s appointment was welcomed by the UCCA, as it signifies that the U.S. continues to support its strategic partner in the face of continued Russian aggression. The UCCA believes that a strong, democratic and independent Ukraine remains in the national security interests of the United States.

Ukraine today stands as the only non-NATO partner nation to have contributed actively to all NATO-led operations and missions for the past 20 years, a fact not unfamiliar to Ambassador Volker, a former ambassador to NATO.

In the meantime, the UCCA is urgently calling upon supporters of Ukraine to contact their elected representatives in support of the latest Russia-sanctions bill. Recently, the U.S. Senate passed an amendment that would codify currently imposed sanctions on Russia, requiring bicameral congressional approval before any changes to these sanctions can be made. Additional, even stricter sanctions would also be added as part of this legislation, targeting Russia’s mining, metal, shipping and railway sectors, parts of its energy sector, as well as numerous individuals who have conducted business with Russia’s intelligence or defense sectors.

While this bill has now been referred to the U.S. House of Representatives, a consensus on its future has yet to be determined, as various interest groups lobby to push back against the overwhelming support the bill received in the Senate.

The UCCA noted that the Ukrainian American community applauds this new legislation, and urges all Ukraine supporters to help ensure that sanctions against the Russian Federation will remain in place until the withdrawal of all covert and overt Russian forces and equipment from Ukraine.