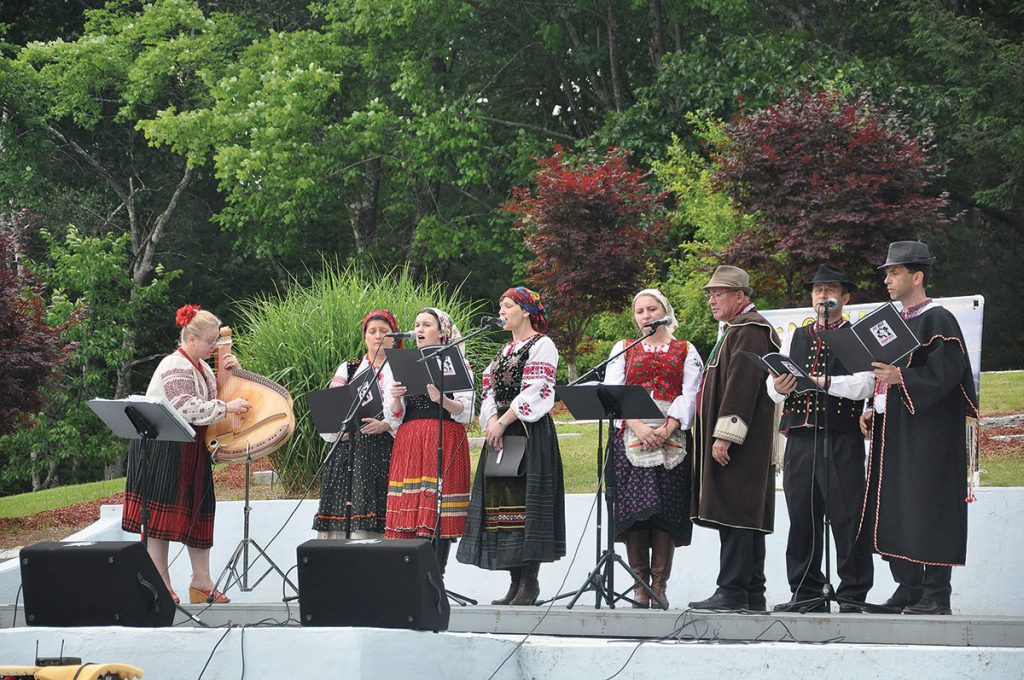 ELLENVILLE, N.Y. – Summer in the United States is rich with festivals among Ukrainian communities. One of them stands somewhat apart, both in format and in spirit. Its spirit is strong, just like its people. This is the “Vatra,” a festival organized and hosted by the Organization for the Defense of Lemkivshchyna (OOL) in the United States, which took place this year on June 24-25 at the Ukrainian American Youth Association (UAYA) campground known as “Oselia” in Ellenville, N.Y.

The festival is not massive, but is family-oriented, and has its own traditions. Every year – and this is already the 17th – the festival is opened with the lighting of the bonfire (vatra) – a symbol of warmth, warm-heartedness and invincible spirit.

Lemkos are friendly, proactive, patriotic and also greatly enthusiastic. United by common goals and friendship, the Lemkos of OOL are part of formal organizations – branches near their places of residence – pay membership fees, and hold frequent branch meetings and conferences of Lemkos in the United States, and participate in congresses of the World Federation of Ukrainian Lemko Unions. They have their own magazine, called Lemkivshchyna.

Vatra organizers and their yearly guests mostly know one other, and they cordially and hospitably welcome new people to their community.

Following the 17th Vatra, I had a lot of new friends. Let me name a few:

Halyna Semenyak, director of the Vatra concert programs and MC of the concerts, is energetic, business-like, mobile and, it seems, knows everyone and everything.

Vasyl Harhaj, the invariable host (“starosta”) of all the Vatra festivals through the course of 17 years, made a great contribution to the implementation of the idea to construct a chapel in memory of Akcja Wisła at the oselia, with funds collected by OOL.

Andriy Khomyk, director of the Lemko Research Foundation, is a “walking encyclopedia” on any issue about the history and culture of Lemkivshchyna, and an active and capably wise popularizer of knowledge about it.

Mark Howansky is unique in that he was born in the U.S. with an American character, but has the spirit and heart of a Ukrainian Lemko. He serves enthusiastically and passionately as president of OOL, attracts his fellow Lemkos to communal work, has organized a whole cycle of lectures together with the administration of the UAYA about the history of Lemkivshchyna, and is the son of a well-known figure among Lemkos, the late Stefan Howansky.

The friendly Mykhailo Chomyk has led one of the most active OOL branches, the one in New York City, for many years. He also sings in the group “Na Lemkovyni.”

Petro Kosciolek, a former manager of oselia and now an active member of the OOL National Board, is very open to communication and assistance.

The married couple, Maria and Stefan Przybylo, from Jersey City, N.J., have been among the most active members in OOL’s New Jersey branch for over 20 years.

And now, about the festival itself.

Saturday’s program began with a showing of various documentary and feature films on Lemko themes. This is the best way to introduce guests to Lemko history. The program was introduced by Mr. Khomyk. Meanwhile, the hosts grilled a traditional pig, also a feature of Ukrainian Lemko cuisine.

And what is a festival without a concert? On Saturday, as soon as the bonfire was lit, on the spacious stage under an open sky, the “anthem” of the Lemkos, “Our Mountains,” was performed (of course, in the Lemko dialect):

A difference between this Vatra and previous ones is that the vocal folklore group Na Lemkovyni, composed of eight singers – ethnic Lemkos born in Lemkivshchyna – performed for the first time. For them, the Lemko dialect is not only native but is also alive, so the audience heard the authentic sounds of Lemko language. And when the group sang “Our Mountains,” even those present who did not understand all of the words had tears in their eyes.

For two days, guests were entertained by musicians from the ensemble Cheremosh. As always, the guests welcomed the renowned honored artist of Ukraine Iryna Lonchyna, who, in addition to her songs “Wreath of My Songs,” “This Is My Ukraine,” “Ukrainian Land,” “My Sister” and others, performed the well-known Lemko song “Oh, Forest, My Mountain Forest” and the Lemko song “Under the Cloud.” Also there were vocalists Julia Busko and Yuliya Pavlyuk, and bandura players Alla Kutsevych, Oksana Telepko and Halyna Leskiw. Fiery Ukrainian dances were performed by the dance groups Malvy (Jersey City) and Obriy (Passaic, N.J.).

This year, the global Lemko community is commemorating a sad date: the 70th anniversary of Akcja Wisła. This was the ethnic cleansing of Ukrainians; many people were killed, and the disobedient were placed in a concentration camp. Moreover, from 1944 to 1946, a Soviet-Polish exchange of populations took place, as a result of which 490,000 Ukrainians were relocated from Poland to the USSR in the steppe regions and the Donetsk area, while 790,000 Poles were displaced in the opposite direction. But Lemkos withstood and preserved their identity.

In commemmoration of this anniversary, on Sunday, the Ukrainian Catholic eparch of Stamford, Conn., Bishop Paul Chomnycky, officiated at a liturgy and a memorial service. Before the concert, Mr. Harhaj said a few words about this commemoration. And the band Na Lemkovyni devoted a separate program to this topic.

And when the 17th Vatra of American Lemkos ended, the guests of the festival took with them a fire that the hosts had ignited in their hearts – not only through the flames of the real bonfire, but also through the fire of their hospitality, generosity, friendliness and fervor of their work. Such volunteer work can only be accomplished with a fire in the heart and soul.

Translated from the original Ukrainian by Diana Howansky Reilly.